For a cautionary tale issued well past its prime, “Cell” isn’t bad. More a leisurely paced, character-driven drama with horror elements than an outright thriller, “Cell” wants to warn viewers that they have become too attached to their mobile devices. This message was timely back in 2006, when the Stephen King bestseller this film is based on hit bookstores, but it bears some repeating. Besides, there’s mild amusement to be had watching people shuffle around like violent zombies as a result of cell phone usage. The visual metaphor might be considered a bit too "on the nose," but I didn’t mind. I’ve got a big nose, so it fit just fine.

Far more problematic is the film’s occasional lack of storytelling clarity. Those familiar with the book will be able to fill in the blanks. Anyone walking in blind may experience something akin to the temporary, frustrating loss of phone service when one drives through a tunnel. “Cell” appears to play fast and loose with its phone-based affliction, something that might have been cleared up had “Cell” gone the mini-series route like King’s prior novels “Under the Dome” and "11-22-63." Couple this confusion with an unsatisfying, ambiguous ending, and one can see why, despite featuring A-list stars, “Cell” sat on the shelf for two years before getting a limited release.

With a bigger budget and a longer runtime, “Cell” could easily have been elevated above its current station as a worthy 2 AM viewing on cable—not that there’s anything wrong with that. It’s cursed with some really cheap CGI, but blessed with actors who are game for, and respect, the material. “Cell” reunites John Cusack with Samuel L. Jackson for their second King feature together (after the superb “1408”), and both turn in good performances. Jackson is particularly effective, going the subdued route when larger-than-life Jackson would have been, in this case, completely understandable. Cusack wears the weight of his character, Clay’s divorce on his shoulders in every frame; his emotional, desperate attempts to reunite with his ex-wife and son drive the narrative once all hell breaks loose.

Hell chooses Logan Airport for its coming out party. A mysterious pulse suddenly turns every traveler using a cell phone into a raging, violent lunatic. These people aren’t zombies, as they’re not dead, but they have all the familiar cinematic characteristics of fast-moving zombies. “Cell” calls these people "phoners." Caught in the ensuing phoner carnage is Cusack’s Clay, whose cell phone battery goes kaput just before the pulse hits. When people start killing each other, Clay is on a pay phone that is as reminiscently old school as this film’s pacing. Unfortunately, Clay was speaking to his wife, Sharon (Clark Sarullo) on her cell phone. This only fuels Clay’s desire to get to Sharon’s New Hampshire address once he realizes the pulse is a nationwide event.

Escaping into Boston’s subway system, Clay meets up with train conductor Tom (Jackson), forming an alliance that grows into a doomed yet compelling friendship. Joining them on their journey is Alice (Isabelle Furhman), Clay’s shell-shocked neighbor who has just killed her infected mother, and Jordan (Owen Teague), the sharpest kid in a prep school whose entire student body has become phoners. Rounding out this motley crew is Jordan’s headmaster, played by Stacy Keach. Not since Wilford Brimley in “Hard Target” have I been so giddy to see an old-saw character actor show up wielding a bow and arrow. Keach’s screen-time is short, but he dominates every scene.

Hardcore horror fans will probably be disappointed with "Cell." Director Tod Williams (“The Door in the Floor”) seems more comfortable highlighting the underlying macabre elements in the film’s dramatic scenes than in depicting gory violence. King’s graphic opening chapter of "Cell," which relocates the film’s airport attack to Boston Commons, gave me nightmares after I read it. Williams’ depiction is a decent action sequence, but it’s not scary. (A later scene, set in a bar, is far more effective and creepy.) This isn’t to say that Williams is unaware he’s making a Stephen King movie; a scene featuring a truck filled with gasoline and a soccer field covered with teenagers ranks as one of the blackest depictions of morbid humor I’ve seen in years. Cusack and Jackson sell the scene so well that its squirm-inducing without having to resort to graphic gore.

There are other notable moments that make “Cell” better than expected, sly little bits meant for maximum effect. Notice how the camera lovingly caresses that huge butcher knife in the airport restaurant kitchen just before the pulse, or how Jackson’s beautiful voice-over prayer ends with a shot of a single tear running down Jordan’s cheek. Williams and King, who co-wrote the screenplay, want us to care about the characters because we’ll be spending so much downtime with them between scenes of violence. As a result, their expected demises have the power to sting.

Unlike the numerous angry reviewers on IMDb, I wasn’t upset that “Cell” deviates from the book. One can’t squeeze 400 pages into 98 minutes. I do wish, however, that the film weren’t so rushed and unclear in its details about the pulse and its aftermath. The concept of humankind turning into one enormous mobile hotspot for use by an evil mastermind has legs. It’s too bad “Cell” cuts the idea off at the knees. 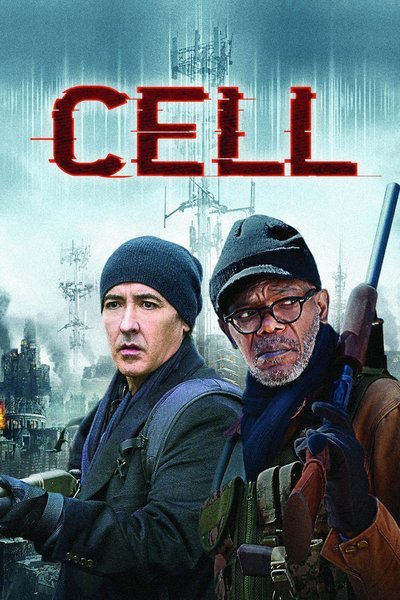