"What did Carrie White ever do to you?"

That question is asked more than once in "Carrie," and it cuts to the heart of this new adaptation. Where Brian DePalma's 1976 version of Stephen King's novel was a teenage girl's nightmare as seen through the eyes of a straight male voyeur, this one looks through a wider lens, and strikes more universal notes of sympathy. (Spoilers, spoilers, spoilers ahead.)

This Carrie White (played by Chloë Grace Moretz of the "Kick-Ass" films) is more conventionally pretty than the scrawny, big-eyed misfit played by Sissy Spacek in DePalma's classic. Her gawkiness is internalized. It's a product of her horrid home life, and the knowledge that she has undefined powers that make her different from other kids, and that they're flowering along with the onset of puberty, and that her mother Margaret (Julianne Moore) sees them as signs of evil, rather than world-changing human potential. In this scenario it does not matter whether Carrie is conventionally "pretty" or "not pretty." Because Carrie is an abused child, she feels ugly; because she feels ugly, she radiates a sense of worthlessness.

Carrie's body-shame was handed down by her mom, who's first seen in a prologue giving birth to Carrie, then briefly considering killing her with the same scissors she will ultimately use to cut the cord. (Peirce's staging of the birth—complete with first-person shot of the infant's soft head resting on bloody sheets—is original, and Moore's acting has a silent-movie purity.) In contrast to DePalma's version, Carrie's mom seems less a standard-issue, frothing-at-the-mouth "religious nut" movie character than a mentally ill single mom, eking out a living as a seamstress and dry cleaner. Moore's Margaret is a purely pitable figure who scratches and cuts her own flesh, and who cannot love herself, let alone a child. As far as Carrie knows, this is a normal home life.

For all the psychological realism of Carrie and Margaret's relationship, however, this remake has a comic book feeling. Peirce has turned "Carrie" into dark, sick take on a superhero origin story, complete with wide-angle lenses and God's-eye-view shots and poetic sound effects (when Margaret is near, Carrie "hears" her before she sees her, thanks to a high-pitched whine that's like a dog whistle). Whole sequences have a Clark-Kent-in-Smallville feeling. What would have become of Superman had he been a girl raised by an insane single parent? He'd might have endured being called a freak for years until he finally snapped and roasted the football team.

The film treats the school's gym teacher Miss Desjardin (Judy Greer)—who punishes Chris Hargensen (Portia Doubleday), leader of the girls who torture Carrie—as Carrie's shadow "good" mother. Her kindness is a heartening alternative to Margaret's paranoia, unthinking cruelty, and emotional dislocation. When Carrie spares Miss Desjardin from the prom rampage, lifting her off a dance floor that she's about to fill with corpses, it's one of the most perversely touching gestures in a movie filled with them.

Perhaps because this "Carrie" is helmed by one of the only prominent female directors in Hollywood, Kimberly Peirce ("Boys Don't Cry"), it appreciates Carrie and her mother and the heroine's various female adversaries as women, and portrays their brand of cruelty as specifically female. For example, where the girls in the 1976 "Carrie" tormented the menstruating heroine in the shower in a wolf-pack manner, as teenaged boys might attack another teenage boy, the shower attack in this film is a joke that originates in embarrassment and nausea, then snowballs. (Peirce doesn't show nudity; this time it's all about the girls' emotions.)

Peirce and screenwriters Lawrence D. Cohen and Roberto Aguirre-Sacasa give the whole film this kind of heartfelt, inside-out re-imagining. Class differences play a part in Carrie's mistreatment; a few early shots establish that Carrie and Margaret live far from the obviously privileged high school, in a modest neighborhood. And as the tale nears its inevitable climax, the tone becomes more despairing. Nothing can stop what's coming.

It's on this last point, though, that "Carrie" falters most conspicuously—and ironically, its failure is a product of its decision to depart from the novel and the first film, but without going far enough. Peirce's version sometimes makes Chris seem a bit of a victim, too, by implying that she was spoiled rotten by her yuppie dad—played by a perfectly cast Hart Bochner, a.k.a. Ellis from "Die Hard." This is a good impulse, but the movie doesn't properly follow through on it. The script has Chris be exaggeratedly "evil" when it serves the plot, but life-sized elsewhere. This version strands the supporting characters between realism and archetype, an awkward spot.

Still, there's a lot to like in this remake. It's sincerely interested in exploring the pain that its characters suffer and inflict. And when Carrie unleashes the full brunt of her powers, it's a magnificent and appalling spectacle—the teenage sci-fi rampage that the "X-Men" films never dared show us.

Not for nothing does Carrie check out library books on magic as well as paranormal power: when she becomes a gore-drenched avenging angel, her gestures become more ritualized, almost dancer-like—as if she's not just committing gruesome murders, but in some sense "presenting" them, as a performer might. The movie links Carrie's burgeoning power to creativity, watching her develop her gifts until, at the end, she is assured enough to preside over a combination Grand Guignol play and art exhibit. The prom is a masterpiece of mixed-media slaughter, "Hellraiser" by way of Columbine. Each killing is a discrete work employing different media and techniques: death by psychic assault, by trampling, by electrocution, by fire, by face-through-glass. As Walter Chaw writes, "Peirce's Carrie does something DePalma's doesn't do nearly so well: it describes Carrie's headspace, so that her telekinesis becomes expressionistic."

Curiously, for such a secular movie, this "Carrie" lends Biblical significance to every blood drop spilled. Original sin is never far from its mind. Margaret's original sin was having sex with Carrie's father, an event she describes as a violation. The community's original sin was attacking Carrie in the shower, humiliating her for manifesting signs of Eve's "curse." After that, they were thrown out of the garden of their innocence, or ignorance; each counterplot or attempt to make amends is a doomed attempt to return to the garden. Carrie's original sin was being born. She is born again at the prom, kills the woman who gave birth to her, and dies that very night.

The first "Carrie" was horror. This is tragedy. 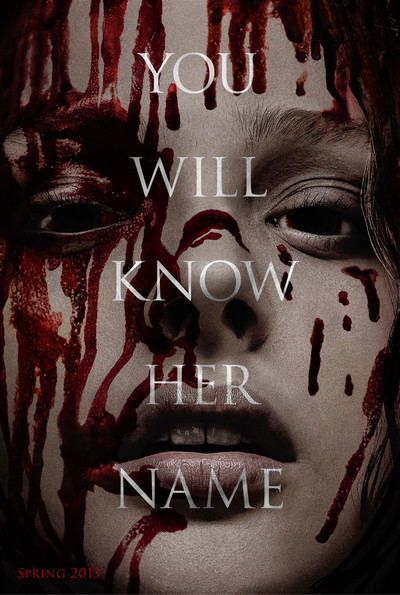 Connor Price as The Beak