Can We Take a Joke?

"It doesn't take much to rile up the outrage police these days," says the opening line of narration in "Can We Take a Joke?", Ted Balaker's documentary about the plight of comedians in the age of social media shaming, campus speech codes and mandatory apologies. "If you're a comedian, there might be calls for your show to be cancelled if someone takes offense at your joke ... but some people are brave enough or stupid enough to fight back."

Right away you know what this movie is: a brief for the defense. And it remains so throughout the movie's brisk 74-minute running time, as the filmmaker interviews several veteran stand-up comics, including Gilbert Gottfried, Lisa Lampanelli, Jim Norton, Heather MacDonald, Karith Foster and Adam Carolla, about how the 21st century has affected an art form that Lenny Bruce dragged kicking and screaming into the 20th.

The film will play well among standup comics who feel they've been muzzled by humorless slogan-spouting liberals, bluenoses and the generally squeamish, as well as by viewers who've bought into the idea that American college campuses have becoming havens for baby Stalinists who either won't permit contrarian thoughts to be expressed or shout them down through heckling, protests, and petitions. "You don't walk through a museum with a towel and throw it over paintings that you don't like," Norton says in a standup clip about the issue.

Unfortunately, the result too often plays as if you've been invited to read half of a courtroom transcript—the defense's half—while skipping past redacted text that might have complicated or undermined the argument. What's being advocated here is, "Shut up and like it," which seems neither sporting nor especially revealing of the free speech values the movie says it's so enamored with.

There are many examples of audience members, including college students, heckling standup comics who have offended them—including Reed College student Sal Rodriguez, who was heckled by a female student during a standup set making fun of women for enrolling in humanities courses while complaining that women are underrepresented in math and science, then lashed back by calling the woman a "cunt." She stormed the stage, took the microphone away and demanded that he shut up and sit down.

This event, captured on video and partly replayed in the movie, is indeed outrageous—no comedian performing in front of a paid audience should have their act terminated by a single audience member, no matter what the cause. And the idea of establishing a support group for anyone traumatized by his set does sound silly on its face. But as you watch the clip, you might also be struck by how poorly Rodriguez handled what most professional comics would consider a pretty unremarkable initial push-back by an audience member. If you can't shut down a heckler by being clever, conciliatory, surreal, or otherwise imaginative, you shouldn't be in standup comedy. Balaker also leaves out the follow-up to the incident—Rodriguez's email calling anyone who complained about his act "faggoty pussies."

Despite the presence of Lampanelli, a white female comic in the Don Rickles-Joan Rivers mode whose outrageously cutting persona is carefully modulated, and Foster, an African-American woman who used to contribute to "Imus in the Morning" (a radio show not known for its sympathies to the sorts of activists criticized in this film), most of the major interviewees here are white guys in their forties or fifties who seem peeved that they can't just say anything they want and be acclaimed as brilliant satirists or harmless purveyors of fun. Their situation often seems less a portrait of righteous village truth-tellers being chased by pitchfork-wielding mobs (as suggested in a bit of old-movie footage) than of a sub-group of comedians who haven't quite adapted to a new world where audience members are unwilling to suffer grievances in silence, and can now double as critics, thanks to online platforms.

Their beleaguered attitude may be justified, but despite a few cherry-picked examples of extreme or ridiculous responses—and justifiable astonishment that anyone would come to see an in-you-face standup comic and not expect to be offended here or there—there's not much evidence in the movie to suggest that's an open-and-shut case. And we never get close scrutiny of material that arouses such ire, much less rebuttals by writers such as Roxane Gay and Lindy West, who have written extensively on this subject (and gotten into online feuds with prominent comics like Patton Oswalt) over whether heckling, walkouts, angry editorials and the like are quasi-fascist overreactions or merely an example of answering free speech with more free speech.

There are too many unexamined premises in this film, starting with the idea that heckling, student petitions, calls for apologies and the like are "censorship"—a word that people living in China or who survived life in the former Soviet Union understand, and would use correctly; in the US, private businesses and institutions, from Harvard to Twitter, can deny a platform, but only the government can completely muzzle an individual—or if they're an unruly response to an unruly art form that amounts to a conversation between the comic and his or her audience. Standup is a mostly-one way conversation, granted. But it's one that should allow for the possibility that audiences might not like the material or find it amusing, or that the comedian may in fact be on the wrong side of an issue, or punching down (heaping abuse on groups that are essentially powerless) versus punching up (against authority figures and representatives of a repressing ruling class, Saint Lenny's targets).

The Marx Brothers, who are background figures in this movie, also represented a spirit of anarchy and liberation; they were all about expressing impulses that we're taught to keep under wraps, and they aimed their madness at institutions, the rich, the supposedly cultured, and regular people who had comparatively little power but used it to crush the joy out of life. "Mel Brooks, whose "Blazing Saddles" is often held up as an example of the kind of politically incorrect film They Don't Make Anymore, was just as sophisticated, in his lowbrow way: "Saddles" is filled with crude sex jokes and racial slurs, including the N-word, but it's ultimately a satire on racism and sexism, and it's always on the side of the little guy, and ultimately appeals to kindness and decency no matter how outrageous it gets.

George Carlin, who died in 2009 but is a heavy presence in here via interview clips, is likewise held up as an example of why shocking, contrarian or unpleasant material should be protected. But the movie ignores the content of Carlin's material just as it dances around the gist of Bruce's: Carlin attacked government, institutionalized sexism and racism, TV networks' squeamishness about sex and profanity, the military industrial complex, corporations' contempt for consumers and the environment, and other amorphous but real and oppressive presences. And when he did a routine about how rape jokes could be funny, it still didn't treat it lightly, as several comics casually defending the right to make rape jokes do here. Although he wasn't always exact, much less always hilarious, Carlin never lost sight of who had power and who didn't, an important distinction in standup, as well as other popular art forms, that "Can We Take a Joke?" mostly avoids.

"When people are outraged by something, they're also patting themselves on the back, like, 'I'm a good person, and I was offended.'" says Gottfried. Mind-reading of this kind is the last resort of the comic who is incapable of looking inward. People may, in fact, be genuinely offended, and they may have good reason to be offended—and whether they're being sincere or not in their expression of that outrage, the best way to shut them down is to be so hilarious, so truthful, so connected to the entire human race, that the heckler can't do anything but laugh or leave. 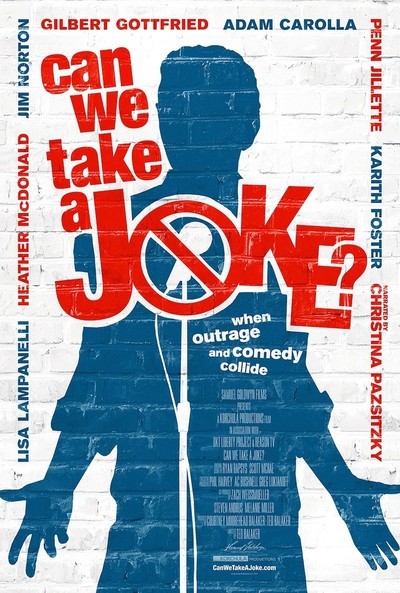 Adam Carolla as Himself

Bob Corn-Revere as Himself

Noam Dworman as Himself

Lisa Lampanelli as Herself

Chris Lee as Himself

Greg Lukianoff as Himself

Heather McDonald as Herself

Jim Norton as Himself

Jonathan Rauch as Himself

Jon Ronson as Himself