No good can ultimately come from a movie that is as obsessed with wind chimes as “Cake.” That constant tinkle-tinkle should be a warning that what starts off as a medical drama with a healthy nasty streak won’t be able to resist slapping a bandage on all the badness in the end.

But it is worth sitting through just to watch Jennifer Aniston pull off a performance of a lifetime. The funny lady has gone dramatic before to fine effect in such indie outings as 2002’s “The Good Girl” and 2006’s “Friends With Money.” But not like this. You won’t be able to take her eyes off of her, which is a good thing since it will take a while to notice that the film surrounding her starts to go soft around the edges until it collapses all together. Like an underdone, well, cake.

Aniston certainly doesn’t need an Oscar nomination to validate what she achieves as a chronic pain sufferer. It is not so much that she doesn’t wear makeup or her hair is limp and greasy. Or that squiggly scars are plastered on her face and limbs, the cause of which takes a ridiculous amount of time to be revealed in dribs and drabs. It’s the desperate-for-relief look in her eyes and the way that every move she makes is an ordeal. Even the small groans and grunts she regularly emits are more agonizing in their restraint than a full-out scream would be.

As well-off L.A. divorcee Claire Simmons, she is cranky. She is bitter. She is highly inappropriate, especially when she sleeps with her gardener. She lies to get what she wants and steals to get what she needs – which usually are Percocet and maybe OxyContin with a voluminous chaser of white wine. Even those who are paid to be nice and caring, like her swim therapy instructor, can’t stand to be around her. If Raid manufactured a human repellant, it would be called Claire.

In the very first scene she gets kicked out of her touchy-feely support group led by an insufferably simpy leader (a nearly unrecognizable Felicity Huffman) for expressing her admiration for a member named Nina who summoned the nerve to leap off a freeway overpass to her death. The domino effect of weeping that her words induce is sickly amusing. Claire is basically the Bad Santa of patients.

The one humanizing slice of “Cake” that is tolerable is Claire’s relationship with her Mexican housekeeper, Silvana (the terrific Adrianna Barraza, who was Oscar-nominated for 2006’s “Babel”). The natural-born nurturer might be a saint as she puts up with Claire’s rudeness, awful behavior and constant demands. But she isn’t stupid. Probably the best sequence in “Cake” is when Claire tells Silvana she has to drive her across the border to replenish her supply of illegal pills at a Tijuana pharmacy.  The clerk offers to stash the drugs in a holy statue. “I have problems with anything religious,” Claire gripes. “You have bigger problems,” he rightfully notes. However, a restaurant encounter where Claire comes to Silvana’s rescue suggests there is some hint of kindness lurking beneath that brittle exterior.

If “Cake” were just the Claire and Silvana show, it might have been more tolerable. The see-saw act between privileged mistress and tolerant worker is in its way intriguing, since Silvana is far richer in what matters than Claire. I would even allow room for the cameos by that freakish opossum who pays nocturnal visits to the backyard pool.

But there is a plot to tell and Cake starts to fall flat every time Claire hallucinates that Nina’s ghost has materialized in the form of Anna Kendrick oozing mean-girlish attitude to discuss the ins and outs of pulling off a suicide. Clearly, Claire is suffering from please-put-me-out-of-my-misery envy in a very big way.

Director Daniel Barnz and writer Patrick Tobin allow matters to get truly questionable when Claire hunts down and hangs out with the sad husband (Sam Worthington of “Avatar,” with cute Aussie accent intact) and wee son that Nina has left behind. Romance isn’t exactly in the air, yet there is a connection. Will Claire clean up her act or simply have a doozy of a meltdown? Or both? Or will a shady stranger suddenly show up and agree to bake her a cake to better justify the title of the movie?

It doesn’t matter. I like Aniston’s Claire. I rank her right up there with Frances McDormand’s Olive Kitteridge, Edie Falco’s Nurse Jackie and Robin Wright’s First Lady on “House of Cards” as damaged women you shouldn’t necessarily admire but can’t help but love. 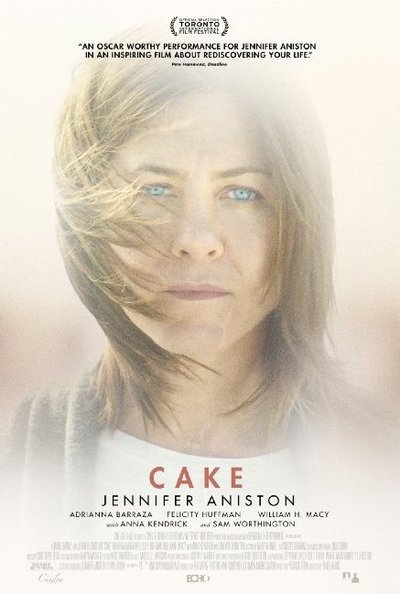