Independent cinema is littered with lovable losers whom we’re supposed to laugh at/with and then be on our merry way, comfortable in the knowledge that we may be a little bit left of center but we’re more normal than that guy. What I often find disingenuous about these characters is that they don’t exist in a world with consequences or genuine emotion. They are exaggerated cartoon characters, the slacker as a punchline. Marty Jackitansky, the unforgettable “hero” of Joel Potrykus’ “Buzzard” is no punchline. Under Potrykus’ clever direction and with a striking performance from Joshua Burge, Marty goes from quirky to desperate to dangerous gradually and effectively. He’s not a character to be taken lightly, or quickly forgotten.

“Buzzard” opens with Marty closing his checking account and then trying to open a new one with the exact same bank employee to get the $50 bonus for opening an account. Did I mention he works for the bank as a temp? He’s the kind of guy who asks what’s complimentary when he orders room service. After a regular pattern of ordering unnecessary office supplies just to return them to the local store to get a cash refund, Marty ups his game in terms of legality and starts signing over refund checks that were sent back to the bank due to incorrect addresses. He lives alone, has a diet of mostly Hot Pockets and Mountain Dew, wears monster masks and listens to metal. Marty is what could be called an “angry young man” but we’ve never seen one quite like him in film.

The reason for that is that Burge and Potrykus are willing to realistically explore the darker/tragic edges of a character like this. They don’t just present the life of a slacker but the slow erosion of sanity that often comes within that lifestyle. This is not an apathetic-but-content life; it is a seething series of missteps and misanthropic behavior from a man who may be delusional and is definitely dangerous. Consequently, “Buzzard” pulses with an undercurrent of dread in that it feels like Marty is going to do something very bad, either to himself or someone else. Burge is phenomenal here, giving a memorable, well-rounded performance. His take on Marty is not your typical cinematic slacker: all cool detachment and naïve apathy. Marty wants more from a world that hasn’t given him much of anything at all. In many ways, “Buzzard” is a clever commentary on a capitalist system of insufficient checks and balances that allows a creature like its title character to hover over the rest of humanity, looking for something, anything on which to feed.

There’s a large segment in the middle of “Buzzard” in which Marty has to hide out in his co-worker Derek’s (Potrykus) basement that feels a bit mistimed. It goes on too long and Derek is too much of a cartoon, drawn like a 12-year-old boy in man’s clothing. He obsesses over his Nintendo games and says things like “gaywad” as an insult. It’s a section of “Buzzard” that feels broad comedically when what works about the film is how much it avoids the easy jokes.

Potrykus and Burge get the film back though in the final act as Marty runs to Detroit with little more than a modified Nintendo Power Glove and his fraudulent checks. There’s a sense of desperation here. Where could he possibly go? What does he have planned? It’s remarkably effective, even on an emotional level. There’s a fantastic scene in which Marty is speaking to his mother on the phone and lying about the place he’s at in life. When he tells his mom that “Everybody really likes me” and we know he’s absolutely alone in the world, it’s hard not to feel for him. Potrykus and Burge don’t stoop to asking us to necessarily “like” Marty, as so many filmmakers have with their angry young men, but by making him seem so real it’s impossible not to want to grab him, shake him, and figure him out. Unlike all of those other lovable losers, we don’t go on our merry way and easily forget Marty Jackitansky. 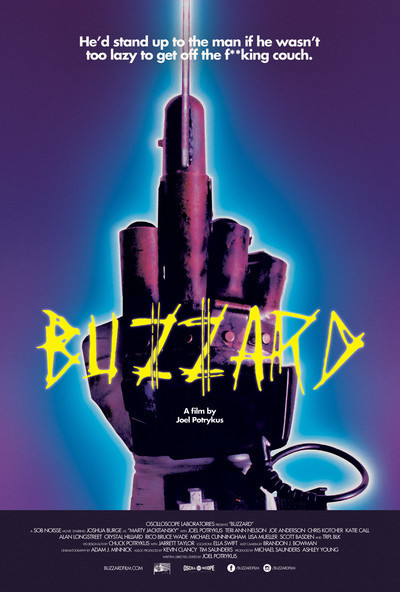