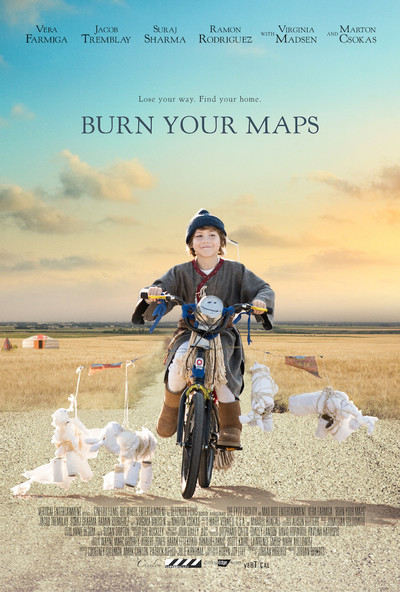 It’s tough to predict the fate of a child actor in Hollywood. Especially one like Jacob Tremblay, who (not unlike Haley Joel Osment in “The Sixth Sense”) made a well-deserved early-career splash with a sensational, multi-award-winning performance. In case you forgot: he is the impressive little one from Lenny Abrahamson’s Oscar-winning “Room”—the quick-study kid who helps his mom escape her kidnapper seven years after her abduction. In Jordan Roberts’ likable yet tonally untidy “Burn Your Maps”—getting a theatrical and VOD release two years after traveling the festival circuit—Tremblay seems to be on the right track, once again playing a perceptive kid launching himself into a world which he has some theoretical knowledge of, but no first-hand experience in. Like his intricate part in “Wonder,” it’s a role that asserts that his achievement in “Room” was no fluke—Tremblay is indeed a gifted young performer who can go the emotional distance.

Here, he is the lonely, awkwardly precocious eight-year-old Wes, coping with the loss of his infant sister in the strangest possible way: growing an obsession towards Mongolia, and eventually convincing himself that he might be … a Mongolian goat herder. It sure sounds like a joke on paper and frankly, it does from time to time cross a culturally exploitative territory. But you forgive it more often than not (let’s save the “not” parts for later), given he is a curious-minded child too young to know the concept of cultural appropriation. And the adults around him seem to be too worked up in their own troubles to take him to task. Among the intriguing array of actors is Vera Farmiga—icy-eyed and a touch intimidating as ever, she plays Wes’ traumatized mother Alise, a language teacher bogged down by a severe case of grief.

We meet her in the very first scene alongside her husband Connor (Martin Csokas)—they are in a couples therapy session, appearing like they have perhaps gone past the threshold where their marriage could be saved by a psychiatrist. Alise is unkempt, short-tempered and generally impatient. While he is no menacing villain, Connor is groomed, rigidly mannered and a bit frustratingly reserved; the contrast is so palpable that you immediately wonder how these two can possibly operate harmoniously in bed. Roberts, also the screenwriter, answers that question in no time through a sharp bit of argumentative tête-à-tête. The couple is sex-starved and Alise, entirely removed from physical intimacy, has been pressuring Connor to get a girlfriend.

Eventually, the turbulent Chicago parents pick up on Wes’ newfound fixation. How could they not, when Wes affably makes costumes out of his older sister’s UGGs, creates scores of goats out of rolls of toilet paper and demonstrates how to humanely kill one through a class project? There is of course a tension-filled difference of opinion between Alise and Connor when it comes to how to deal with Wes’s growing passion for assuming another culture as his own. While the latter is inclined to bring an end to the nonsense, Alise nurtures it. Before you know it, she is on her way to Mongolia with Wes and Ismail (Suraj Sharma), Alise’s lonesome immigrant student who aspires to be a filmmaker and befriends Wes along the way.

The rest of the film is as manipulative and (in a pronounced tonal twist) whimsical as you’d expect. Plus there is no escaping its mild yet cringe-worthy cultural exploitation, despite John Bailey’s golden cinematography, Virginia Madsen’s appealingly naughty ex-nun (who leaves a brief but welcome mark on the story) and Ramón Rodríguez’s sweet Puerto Rican tour guide with whom Alise steals a kiss. I wouldn’t go as far as calling “Burn Your Maps” offensive—it gets away with its well-intentioned cultural missteps by mostly being a story about and for kids. And yet, everyone will have their own mileage with the privileged white family at the film’s center. I am guilty as charged. In the end, I bought Wes’ unusual journey through his grief as a child with boundless imagination and admired the near-finale when the family finally meet a group of Mongolians who helped free the clan from their questions around afterlife. Sometimes, what could make you existentially whole is a world away. You just need to follow your inner shepherd to get there.