In order to understand the mind of Donald Trump, one must acquaint themselves with the life and legacy of his mentor, Roy Cohn. He’s the notorious lawyer who tampered with evidence in order to ensure that Julius and Ethel Rosenberg were sent to the electric chair, despite the fact that their shared status as dangerous Russian spies is still hotly debated. Cohn coaxed what was later alleged as a false testimony from Ethel’s brother, David Greenglass, that affirmed her complicity in the eyes of the court. Has enough evidence subsequently come to light connecting her with Julius’ role as a recruiter of Russian spies, and have the nuclear secrets reportedly stolen by Julius been found to be of much value?

The new documentary “Bully. Coward. Victim. The Story of Roy Cohn” makes a convincing case for how the couple’s death remains an egregious miscarriage of justice fueled by the Red Scare, which played a crucial role in launching the career of Cohn. After the trial, he was promptly hired as Senator Joseph McCarthy’s chief council upon the recommendation of J. Edgar Hoover. It’s no wonder why Ethel’s ghost relishes the opportunity to haunt Cohn during his final days in Tony Kushner’s Pulitzer Prize-winning play Angels in America, one of the greatest texts ever written for the stage.

I first became aware of Cohn while watching Mike Nichols’ awe-inspiring HBO adaptation of the epic production, in which Al Pacino nailed the layers of self-deception that the lawyer clung to with ferocious zeal. The humanizing force of Kushner’s artistry literally changed my life as a devoutly religious teen by removing the stigma from homosexuality, an orientation that I had been taught repeatedly in church was a sin. Now HBO is set to premiere “Bully. Coward. Victim.” one day prior to the 67th anniversary of the Rosenbergs’ execution, and its timing couldn’t be more eerily prescient.

While the nation is rightly rejoicing this week’s historic Supreme Court ruling that prohibits employment discrimination against LGBTQ+ citizens, it’s easy to forget that our president robbed transgender Americans of their health care protections just three days prior, or that he plans to continue opposing same-sex marriage in the upcoming election. Cohn is the connective tissue between McCarthyism and the MAGA era, and though he succumbed to AIDS in 1986, he continues to wreak havoc upon our world through the amoral principles he instilled within Trump back when the future reality TV star was “a sheltered guy from Queens.”

“Bully. Coward. Victim.” covers much of the same ground as Matt Tyrnauer’s equally essential documentary, “Where’s My Roy Cohn?”, from last year, but what sets it apart is the fact that it was directed by the Rosenbergs’ granddaughter, Ivy Meeropol. Unlike the network’s recent underwhelming documentary, “Natalie Wood: What Remains Behind,” which was marred by the unpersuasive efforts of Wood’s family to steer the narrative toward exonerating Robert Wagner, Meeropol doesn’t sidestep how her father, Michael, eventually had to come to terms with Julius’ lack of innocence.

None of his crimes, however, seem to justify the lawless methods Cohn utilized to prosecute him and Ethel on charges of espionage, rendering Michael and his brother Robert orphans at the mere ages of ten and six. In a series of candid interviews, Michael recounts how he began fighting to clear the names of his parents, including a galvanizing TV appearance where he stands up to Cohn, daring the bullheaded lawyer to sue him for libel. Even Cohn’s own cousin, author David L. Marcus, dubs him “the personification of evil,” though the film effectively illustrates how such a term is too reductive when attempting to thoroughly examine his sociopathic psyche.

Whereas Tyrnauer’s film delved into the shame showered upon Cohn by his mother, Meeropol suggests that it was the incarceration of his uncle Bernard Marcus at Sing Sing—the same prison where he later sent the Rosenbergs—that cemented his refusal to be victimized. Being a closeted Jewish man, Cohn saw his own attempts at transcending the societal taboos of his identity as a way of sticking it to the establishment, holding others accountable for laws he had no intention of following himself. His money laundering schemes were as rampant as his failure to pay taxes, accentuating how he prioritized winning over all else. His adversarial nature extended far beyond the courtroom, causing him to resist every opportunity to apologize, a characteristic clearly inherited by his protégé Trump upon being first accused of racism in the early ’70s.

Just as Trump has used tabloids as a mouthpiece to dupe his base, Cohn convinced gossip columnist Cindy Adams to “take care of people he didn’t like.” Cohn’s description of his client, crime boss Tony Salerno, as a “warm, decent human being,” isn’t a far cry from Trump’s fawning praise for the tyrants he desires to not only befriend but emulate. Salerno supplied the concrete that erected NYC’s Trump Tower, while Cohn’s law firm arranged for Trump’s sister, Maryanne, to become a federal judge in the Reagan White House. What’s especially maddening is how Cohn’s hollow claims that he’s a friend of the middle class are every bit as glaringly fraudulent as those made by Reagan and Trump, whose favoring of deregulation causes corporations to be valued far more than people. And yet, it is Cohn and Trump’s skill in ingratiating themselves with those whom they wish to get something from, whether it be their money or their vote, that make them so formidable in their influence.

The title of Meeropol’s film is taken from the three-word description etched in the block reserved for Cohn in the AIDS Memorial Quilt, which happened to be the first one she and her father spotted when it was on display in Washington D.C. These words succinctly magnify the contradictions that make Cohn such an endlessly fascinating and repellant figure. He prided himself on demonizing homosexuality while parading his boyfriends in front of a president who remained criminally inactive on addressing the AIDS crisis. “I have sex with men,” Cohn boasts in Kushner’s play, “But unlike nearly every other man of whom this is true, I bring the guy I'm screwing to the White House and President Reagan smiles at us and shakes his hand.” Meeropol includes the photograph of one such encounter in the film, and it cuts to the heart of what makes Cohn such a damnable figure. He betrayed the very communities to whom he could’ve served as an icon, causing him to be remembered as one of the most hated men ever to live, a fate tantamount to winding up in Hell.

I was reminded of Phyllis Schlafly, the conservative activist who fought against the ratification of the Equal Rights Amendment on Hulu’s “Mrs. America,” finding herself entrapped in a domestic purgatory fit for Chantal Akerman during the series’ final moments. Neither Cohn nor Schlafly wanted their lives to be limited by the very strictures they sought to impose on society, hoping to win power at the expense of their peers. The sobering truth about Cohn—and Trump, for that matter—is that they are the natural spawn of a society that cloaks systemic oppression in the guise of democracy, while rewarding bad behavior so long as it’s privileged. Monsters like Cohn are created by a nation that judges its people based on the level of their clout rather than the content of their character. Cohn embodies the primal urge to succeed at all costs, and the first step toward defeating him is to root him out in ourselves. 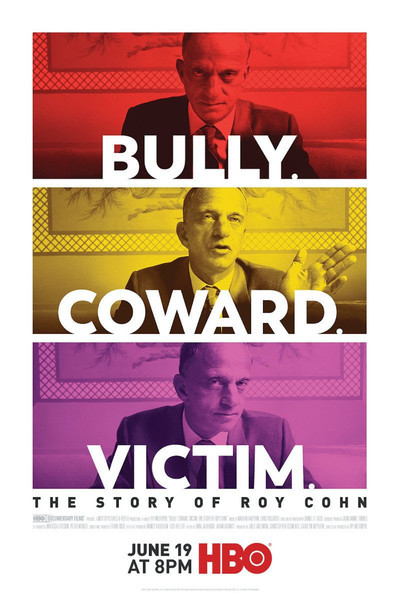