And three ketchups, to go...

From "Broken City" to the gone-too-soon Starz series "Boss" to a hundred other movies and TV shows before that, we know the villain is utterly corrupted and beyond redemption when he reveals his master plan to be:

A. Poisoning the water supply.

B. Starting World War III so he can sell nuclear weapons to both sides.

C. Kidnapping all the children and just the particularly cute small animals in town.

D. Buying up housing projects so he can tear down the buildings, evacuate the good people and build condos and/or a shopping mall.

The correct answer, of course: D!

That's the end game for the evil Robert Nkomo Morel (Adewale Akinnuoye-Agbaje), a deposed African thug now walking stiffly and literally carrying a big stick in "Bullet to the Head," an occasionally entertaining, often incomprehensible and ultimately quite average 1980s-homage mismatched buddy action pic. Morel is engineering a vast takeover of a plot of land in New Orleans so he can demolish the low-income housing and put up … condominiums! With high-end fixtures and marble bathroom floors! Mwah-ha-ha-ha-ha!

Geez. You couldn't get even one of the Avengers to don the costume and fly over to the Crescent City to put a stop to that mundane brand of evil?

Directed by the veteran Walter Hill ("48 Hrs.,") and filled with cheesy stop-motion zooms; rapid-cut fight scenes with insanely loud sound effects for every bone-cracking punch; racially insensitive one-liners; window-dressing female characters, and wall-to-wall carnage, this is the kind of brainless action movie Sylvester Stallone would have starred in circa 1985. That it stars a Stallone who's closer to 70 than 60 is just … weird.

Stallone plays lifelong criminal James Bonomo, who goes by the unfortunate nickname of Jimmy Bobo. That makes him sound more like a Howard Stern Wack Packer or a 1950s TV clown than a mercenary gun-for-hire who's so efficient, he should be working for the CIA or some Russian billionaire instead of kicking around the bowels of New Orleans, apparently barely scraping out a living.

Of course "Bullet to the Head," based on the graphic novel "Du Plomb Dans la Tete" and adapted by Alessandro Camon, works in some running jokes about Jimmy being a dinosaur. He doesn't really understand how the whole Google thing works, and there's a lot of "not bad for an old man" quipping from sidekicks and/or adversaries every time Jimmy comes out on top in a confrontation.

But this isn't Clint Eastwood playing some aging gunfighter clearly past his prime or a growling next-door neighbor in his 80s. Stallone/Jimmy is still freakishly muscled, the veins bulging from his arms and often-shirtless torso as if he's some Steroid Era slugger for the Oakland A's.

As Jimmy gets into one bloody brawl and deadly shootout after another, coming out on top every time of course, it's just a given that he's stronger, quicker, deadlier and a better shot than all these punks less than half his age. Why? Because he's Sly Stallone! He's narrating the movie! He's not going anywhere.

After Jimmy and his partner Louis (Jon Seda) take down a mark who turns out to be a corrupt cop turned New Orleans thug, all hell breaks loose in the Big Easy. The strait-laced Det. Taylor Kwon (Sung Kang, best known in America for a few "Fast and Furious" movies) arrives from D.C. and finds himself paired up with Jimmy in a mutually beneficial pursuit of justice, even as he keeps reminding Jimmy he's eventually going to take down Jimmy as well. That's probably because Jimmy keeps on killing the bad guys before Kwon can arrest them and read them their Miranda rights.

"Bullet to the Head" happily indulges in many action-pic cliches, including the amateur surgeon who expertly removes slugs from the whiskey-anesthetized shooting victim. (The slugs always make the same "plinking" noise when deposited into a metal tray that the non-surgeon apparently keeps on hand just in case.) And if you think this movie is going to avoid an extended confrontation in an abandoned warehouse, your expectations are way too high for a movie titled "Bullet to the Head."

To its credit, the film does take one overly familiar tableau and has great fun with it, thanks in large part to Christian Slater's performance as a wealthy drunken patsy who quickly realizes the folly of keeping quiet when there's a Stallone with a pair of pliers hovering over you. It's a hilarious scene.

The beautiful Sarah Shahi does what she can as Jimmy's tattoo artist daughter. Jason Momoa from "Game of Thrones" is a suitably bad-ass villain who looks like he could crush the much smaller and older Stallone — but then we wouldn't have much of a movie, would we?

But Kang is overmatched keeping up with even a Stallone who's as old as a Rolling Stone. The classic buddy action pics of the 1980s worked because Danny Glover and Nick Nolte possessed the onscreen straight-man heft to withstand the acting pyrotechnics of Mel Gibson and Eddie Murphy, respectively. Here, we barely notice the little cop tagging along with Stallone. 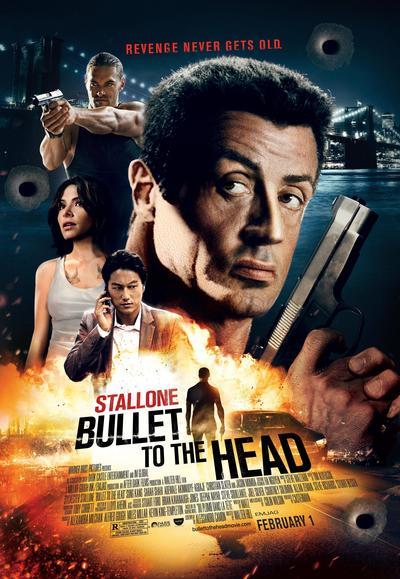