Well, if there’s one positive thing to say about “Brimstone,” it’s that it doesn’t lack for lunatic ambition. This Western/horror picture, the English-language debut of Dutch writer/director Martin Koolhoven, is two-and-a-half hours long, has a relatively complicated elliptical flashback structure, and is for the most part what you would call uncompromising in the treatment of its subject matter.

The subject matter, and its treatment, is also what make “Brimstone” a tedious and repellent viewing experience. The movie begins with what seems a standard enough bit of imagery. A nicely lit shot of the beautiful Dakota Fanning, looking at the camera as if it were perhaps a loved one looking back at her. “She was a warrior,” the voice of a young woman says on the soundtrack. “In the old country, you had to be, in order to survive.” All right, then. Nothing you haven’t heard before, nothing you can’t handle. The movie shifts out of THAT gear pretty quickly, although it never manages to shake off the dialogue clichés completely.

Fanning’s character is named Liz, and she serves as a midwife to the other residents of her bleak frontier farm town. One bad Sunday, a bearded fellow with a scar running vertically the right side of his face, right over the eye, turns up in the town’s austere church. Guy Pearce as “The Reverend” declaims in a Dutch accent that, as accurate as it may be, sometimes finds him sounding rather like Bela Lugosi. Directly after he addresses the congregation, a local woman’s water breaks. Liz tries to assist in birthing in the church itself, and has a quandary: either the mother can live or the child. Liz chooses to spare the mother, and soon both “The Reverend” and the woman’s husband are all up in her mute grill.

The Reverend seems to be particularly tetchy. “Tongueless murderers end up at the stake,” it is said at one point. Liz can’t seem to make it clear to her family—husband, his son by another mother, her daughter—just what kind of business The Reverend means. As she flees at the end of the movie’s first self-proclaimed “chapter,” titled “Revelation,” we expect a hot pursuit to follow. But no. Chapter Two, called “Exodus,” seems to tell a completely different story, about a teenage girl who’s running away from something terrible and then winds up being sold to a brothel keeper. As she’s hustled upstairs and given something to drink, one of the girls chortles “Swallow it right on down, girlie. Soon you’ll be swallowing something else.” This salty dialogue intends to underscore the cruelty of the world to which Joanna will have to become accustomed. After any number of horrors and humiliations endured at “Frank’s Inferno,” The Reverend himself, noticeably younger, shows up. Joanna is the girl he’s been looking for. In not too short order (well, in the next chapter, “Genesis,” which is indeed the origin story, to be precise), The Reverend is dragging Joanna (Emilia Jones, who maybe suffers the most out of all the female actors in the movie, which is saying something) through a path of mud, averring, “I’ll love you, and you will learn to love me.”

Spoiler alert: in addition to being a murdering deranged religious hypocrite, The Reverend is also an incest-obsessed pervert, and “Brimstone” turns out to be all about his pursuit of his daughter and, um, yes, eventually his granddaughter. If you’re saying “Um, ick,” some credulous fans of the film might counter “Exactly!” promoting “Brimstone” as some sort of feminist parable. That such a reading is nonsense can be proven merely by watching the work.

The Reverend is supposedly loathsome, but Koolhoven rubs the viewers’ noses in his every depredation, lovingly filming and then piecing together each simulated atrocity the character commits. I suspect he’s only held back by the fact that had he tried, say, to make the scenes of rape visually explicit, his film would be unreleasable, and he himself might well be put in jail. Now, these are, I suppose, valid, albeit ultimately craven in the higher moral sense, reasons for watering down one’s artistic “vision.” But I’m not going to make a federal case out it.

Which isn’t to say that Koolhoven doesn’t go “far,” or even “too far.” I suppose under a particular artistic circumstance it might be permissible for an adult male performer to say to a five-or-six-year-old actress, “Has your mother told you what it means to be a whore?” followed soon afterwards by “Have you bled yet?” This movie does not, I firmly believe, constitute such a circumstance.

In any event, by the finale, it is entirely clear that the Reverend is the character with whom Koolhoven actually identifies. Gross. I wonder if President Trump can extend that travel ban to The Netherlands. (Let’s not even consider the implausibility of an American pioneer tale in which all anybody ever thinks about is sex, specifically incestuous sex. Empirical evidence indicates this was not actually how the West was won.)

“Brimstone” was apparently a passion project for the filmmaker, taking him years to write, driving him to the extent that he didn’t take a salary; he turned Hollywood money down when he couldn’t get final cut, and he had a near-breakdown that required a trip to the hospital emergency room when it looked like his financing was going to fall through. I’m all for heroic exertion in pursuit of one’s art, but in this case I wish Koolhoven had tried therapy first.

Speaking of pioneers, the long-time rock critic Robert Christgau, back in 1971, condemned Black Sabbath’s 1971 LP “Masters of Reality” as “dimwitted, amoral exploitation.” He was wrong about the album—it rules—but as a sharply intelligent phrasemaker he scored big. And his phrase applies almost exactly to “Brimstone.” 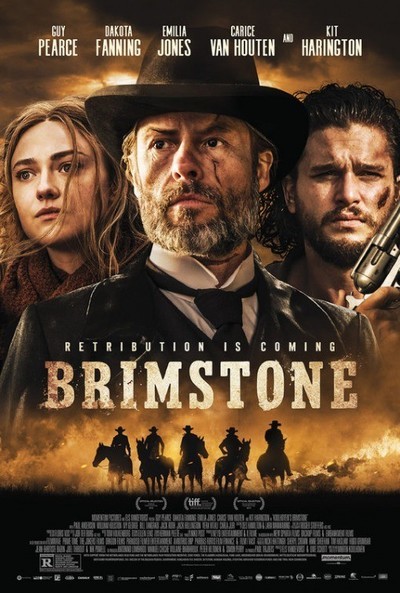 Guy Pearce as The Reverend