Shot in its title location and featuring non-actors from the area, Jeppe Rønde's “Bridgend” is directly inspired by a true phenomenon. The film’s poster will not tell you that, but a pre-end-credits card will. It reveals that from 2007 to 2012 there were 79 suicides by hanging in Bridgend, South Wales (mostly by teenagers), with no suicide notes left behind. More than most true story films, the placement of this revelation proves to be one of the movie's biggest declarations, making truth an afterthought. “Bridgend” does have a life on its own beyond fact, but the narrative it offers in place of the headlines only further proves how phenomena like adolescence and death is better observed, not investigated.

Our surrogate into the world of these teenagers is Hannah Murray’s Sara, a new girl to Bridgend without any friends. She slowly finds her way into the group, one which she initially approaches with hesitation, but sees that their ruffian nature is an inward camaraderie. The group of teens hang out in the woods, drink alcohol and jump naked into a grungy, makeshift pond. In their next activity, they wander to the site of a friend's suicide. After pouring some of their alcohol on a makeshift grave, they tilt their heads up and howl his name to the sky. This is revealed to be a ritual just as much as it is primal, no different from how they cause havoc within the mortified town—screaming, cussing, smoking, breaking stuff, being generally unpredictable. Very little seems to matter to these young adults, except for their friends and their freedom; it's a perfect summation of what it is like to be a teenager, and why death might be taken as less grave if everyone else is doing it.

The power of Rønde’s macabre coming-of-age story weakens as a narrative of some degree begins to take precedence. Sara gets closer to the group, especially with a young man named Jamie (Josh O'Connor), all at the behest of her father Vicar (Adrian Rawlins), a police officer in Bridgend who often embodies the famous creed that parents just don’t understand. The performances from these three characters are all strong in spite of scant construction—some of Murray’s crises even have whiffs of Anna Paquin’s unforgettable traumatized adolescent in Kenneth Lonergan's “Margaret”—but they are far lower on the list of this film’s curiosities than actors usually are.

The question of why these suicides happen is not one that "Bridgend" dares to answer, which is refreshing. It isn’t even a spoiler to say that the movie doesn’t explain itself—it might even help you with a less distracted viewing than my own. But the film’s overall arc makes it seem like a revelation is coming, or that there is a type of order to be unearthed. We get this impression from two key characters: our surrogate Sara, who goes from being an outsider to a key member of the group, having close interactions with some teens who randomly end up dead by the end of the film; her policeman father, who asks out loud why these things are happening, who literally investigates the case. These two bring the movie to a third act that turns “Bridgend” into the juvenile delinquent drama it isn’t strong enough to be, since the characters and location are not fortified, nor is there is a strong propulsion to the narrative.

As Rønde’s film is torn between experiential and experimenting, it does have a solid foundation with its gripping visual storytelling. Its dialogue doesn’t compare to the flourishes found in visual motifs, like shots of ceremoniously folded clothes on a bed, or a dog that appears throughout, in the background, like the Grim Reaper. Thorough desaturation blankets everyone and everything, giving the whole movie a bleak atmosphere where teenage rebellion seems to be the only sign of life. There are even a few breathtaking moments of poetic faming, in which one or two people are then joined by a number of others who descend into the frame, a recurring shot that captures the personal experience of a group just as much as the individual.

By that revealing credits card, “Bridgend” is itself lost, but by its own making. The ambitions are there in Rønde’s film and are exciting to witness, as is the evocative imagery. But “Bridgend” feels imbalanced. For this abnormal case, to nudge even a hint of logic about adolescence or death reduces the overall impact, especially as its abstract remarks prove more productive. 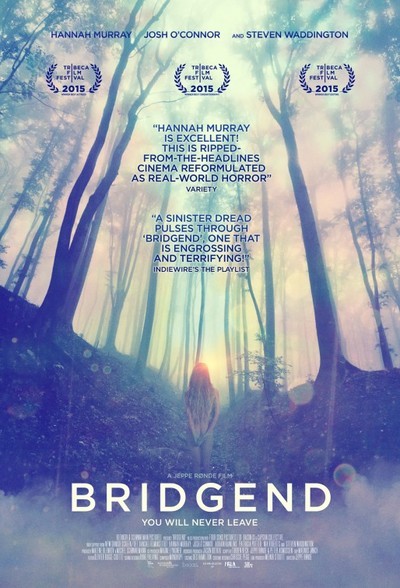