Man, is it a tricky time to be releasing a movie like “Brian Banks.”

The drama from director Tom Shadyac was inspired by the true story of the former NFL player who was falsely accused of rape when he was a high school star on the rise. Banks pleaded no contest on some bad advice from his lawyer, spent six years in prison and had to register as a sex offender, all the while fighting a massive uphill battle to clear his name. Eventually, he achieved exoneration with the help of the California Innocence Project and since has gone on to use his high profile to help others do the same.

This all happened to Banks. This does happen to people. But as we as a society continue to navigate the tidal wave of the #MeToo movement, with women’s voices ringing out louder and clearer than ever before, a feel-good story about a man overcoming a wrongful rape accusation just feels sort of ...icky, maybe? It certainly seems off in terms of timing and tone. We are finally believing women when they tell their stories of surviving abuse, and along comes a film that perpetuates some of the most heinous myths and misconceptions about rape: that an accuser is merely making up a story to protect her reputation, avenge hurt feelings or shake someone down for a big payday.

And yet, this rare drama from Shadyac—who made his name with high-concept Jim Carrey comedies like “Ace Ventura: Pet Detective,” “Liar Liar” and “Bruce Almighty” but significantly changed his life following a serious bicycle accident in 2007—is solidly crafted and obviously well intentioned. Because the script from Doug Atchison jumps back and forth and time, it allows for some moments of legitimate suspense and doesn’t necessarily hit all the beats you might expect. But the smartest move of all was casting Aldis Hodge as Banks. Hodge (“Straight Outta Compton,” “Hidden Figures”) has a naturalism about him that’s wholly engaging and he’s calibrated his character’s rage to make it register without cresting over the top into melodrama. Playing Banks over the course of more than a decade, Hodge consistently makes the movie compelling, even when it veers toward a safe, faith-based uplift.

Banks was a standout linebacker at powerhouse Polytechnic High School in Long Beach, Calif., when he agreed to sneak off with a classmate (whose name has been changed) and fool around in a faraway nook during summer school. While he stopped their make-out session before it got too intimate, she later claimed he dragged her down a quiet hallway past several packed classrooms full of students before assaulting her. Her motivations come to light over the course of the film, but with the exception of one moment of truth, Xosha Roquemore is stuck playing her as the most distasteful kind of ghetto stereotype.

With echoes of the horrific treatment we see the Central Park Five endure in Ava DuVernay’s exceptional miniseries “When They See Us,” “Brian Banks” depicts a young black man being forced into a plea deal in a legal system that values expedience over truth. He sees no other way out and reluctantly agrees to the offer in front of him but receives a far harsher sentence than his lawyer had promised him. Registering as a sex offender and wearing an ankle bracelet hamper his ability to return to football on any level or simply find a job paying minimum wage, and his mounting frustration is palpable. Eventually, with the help of attorney Justin Brooks (who’s an executive producer alongside Banks) and some dramatic twists involving his accuser, Banks gets his conviction overturned. Greg Kinnear is a great choice for the role, balancing world-weariness with sincere idealism.

Hodge also enjoys some lovely moments with Melanie Liburd as a personal trainer who becomes romantically involved with Banks despite some initial hesitancy. The scene in which she reveals her own history of abuse becomes the film’s most moving, and it provides a crucial counterpoint.

“Brian Banks” may indeed inspire audiences the way it intends—it just might take a little while for it to achieve that goal. 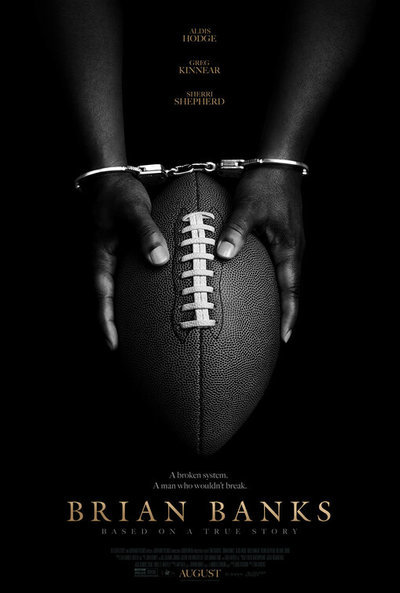 Rated PG-13 for thematic content and related images, and for language.