Abi Damaris Corbin’s bold and tragic film “Breaking” is about the power in recognizing a person’s desperate situation. In this case, it tells of Brian Brown-Easley, a former homeless Marine with PTSD who took a bank hostage in 2017 with a bomb in his backpack. This movie presents Brown-Easley from the start as someone pushed into such an action, and the “thrills” of this movie are largely bittersweet—we watch someone who doesn’t want to hurt anyone as he fights to be seen. "Breaking" is more or less a tribute to him, as made possible by an incredible, humanizing lead performance from John Boyega.

Boyega viscerally captures the all-too-human layering of power and powerless in being a hostage-taker not out for blood. He has the bomb in his backpack (or so he claims), and he calls the shots, however much they’re punctuated with “Thank you ma’am” or general polite-speak from his shaking, low voice. He has his demands, and they are mostly about getting his money back from the VA (892 dollars) that was taken from his disability check, and getting the news channels to capture what’s really going on. To give him a voice.

But as someone doing a criminal act inside a bank with big glass windows, Brian makes himself a giant target, while nonetheless being fueled by these situations that have made him feel small. Plus, he is always told to hold on the line when trying to get a 9-1-1 dispatch to send police. There is no bluster in what he does, even when his billowing anger turns to scared screaming and crying—nor is there in Boyega’s performance, which from his initial slow march into the Wells Fargo bank gives us the aching impression of someone doing something they don’t want to do, but feel they have to. It becomes more and more apparent how much Boyega is put into the right-third of the camera's frame, not dominating a scene but trying to get through to the next one.

The first third of “Breaking” focuses on this "heist" that Brian operates with two women remaining in the bank; most of the time he is making sure nothing is getting out of hand. He addresses them politely, and apologizes for covering one when something like a gunshot rings through (it’s just someone at the door). The two remaining bank employees, Nicole Beharie's Estel and Selena Leyva's Rosa, wrestle with their own composure and sense of safety. They’re compelling energies in it, while helping reveal the humanity of the situation, of what it's like to be so close to Brian in this moment.

The script, co-written by Corbin and Kwame Kwei-Armah, expands its world of interactions to other people, offering mini threads of connectivity, moments of Brian's pain being recognized. Connie Britton plays a reporter who speaks to him from her desk with cameras rolling, and might be his way to having his voice finally heard. Michael K. Williams is Eli Bernard, the hostage negotiator that is eventually called in—Brian has to wait even for that—and they share a similar Marine background, and a tenderness. Brian also talks to Eli with the awareness that he knows what’s ultimately going to happen to him. These passages expand Brian’s circle, but can lead to some slackness in the tension initially created by the first act. Jeffrey Donovan appears in a throwaway role as Major Riddick that practically seems to bulk up the movie’s police presence, as if one could squint and see an action movie.

“Breaking” is a tragedy that only opens like a thriller. From the beginning, "Breaking" is about justice. Comparisons to Sidney Lumet’s “Dog Day Afternoon” are apt, but this story of a bank being held up is ultimately not concerned with ratcheting tension, or the sweat on its protagonist’s shifting brows. It’s all about that face Boyega makes as he steps into the point of no return, handing a note to Rosa that says "I have a bomb" when the actor makes it so clear he wishes he could say, "Help me. Don’t make me do this." 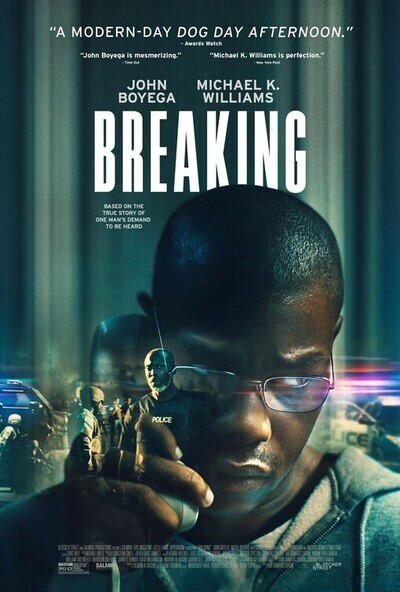 Rated PG-13 for some violent content, and strong language.