Breaking Boundaries: The Science of Our Planet

The global warming crisis has, understandably, created its own crisis for some documentary filmmakers. How to get your audience to pay attention, so that they then make a change? The answers have come in different approaches, with some going for the more slice-of-apocalypse presentation (“Aquarela,” highly recommended) or the celebrity-driven (like Al Gore's “An Inconvenient Sequel: Truth to Power,” or whatever documentary Leonardo DiCaprio has recently executive produced). Then there's Netflix's "Breaking Boundaries: The Science of Our Planet," a globe-trotting, 75-minute crash course on the many different ways we are trashing our planet, topped with a little bit of optimism about how it's not too late. This unabashed infomerical is broadly affirming, but now I'm worried about the future of urgent issues documentaries.

Narrated by the calm tenor of Sir David Attenborough, “Breaking Boundaries” covers the melting of the polar ice caps, the deforestation of the Amazon, the destruction of the coral reef, the burning of the Australian rainforest, and the way that COVID took over our sick ecosystem, all in about the time it took you to read this sentence. This scope speaks to the breadth of issues, and the various ways in which human beings have harmed Earth's systems, some of which are beyond return. But that fleeting screen-time proves counter-intuitive as it doesn’t dig into the topics with a great deal of information, nor does it create much of an emotional connection beyond what one already has before hitting play.

“Breaking Boundaries: The Science of Our Planet” only sounds like a mish-mash title. Scientist Johan Rockström has devised a concept of boundaries, in which we cross certain lines of harming the Earth with regards to levels of biodiversity, ocean acidification, or nutrients. The documentary touts this as its big original idea to add to the global warming documentary pile, and our “crossing” of said boundaries is shown with animation of people who look like they’re marching over one big “Saturday Night Fever” dance floor with rows of squares that go from green to yellow and then a no-return red. "Breaking Boundaries" loves to cram in its metaphors (global warming is equated to dominos, or to a train with no brakes about to go down a hill), and it loves and repeats this image the most.

The film was directed by Jon Clay, and yet I would not question it if you told me that was a pen name for Netflix. More than a lot of Netflix Originals, “Breaking Boundaries” seems specifically made for the touch-and-go attention span that the streaming service cultivates, while trying to make talking head moments extra flashy by putting stuff around them. There are too many goofy examples of an earnest intellectual (Rockström) giving a speech, and then the filmmakers going buck-wild with the green-screen canvas behind him as if this were classy "Tim and Eric." If it’s not the thousands of nervous systems that flare up next to Rockström and distract from his words, it’s how his face is super-imposed over fires and other disasters, followed by other in-your-face graphics, all for the sake of simply looking busy.

The style even bungles what is likely a more intricate argument from Rockström and his fellow scientists. It's hard to keep track of the six major ecosystem boundaries that each get their respective segments—they are rarely named by title, and when they're all gathered on the same graphic, it's just a bunch of green, yellow, and red bars. For a documentary that wants us to simply download and share all of its info, it's a major flaw.

True to its promise, “Breaking Boundaries” has a bit of hope for change an hour in (literally), with ideas of recalibration that came from the COVID pandemic. In its way of speaking directly, of calmly pleading with viewers to stop destroying our house, it guides us to concepts that could help make a difference—the kind of minutes in these documentaries that make them important, even if the aesthetics are disposable. In this case, you almost wish the Netflix algorithm kicked in during various segments to their other documentaries that examine these problems in detail. “Would You Like to Know More? Watch Jeff Orlowski’s “Chasing Coral” to gain a perspective-changing sense about the damage to coral reefs.” But since Netflix doesn’t have that, yet, please consider this a recommendation to at least watch “Chasing Coral.” 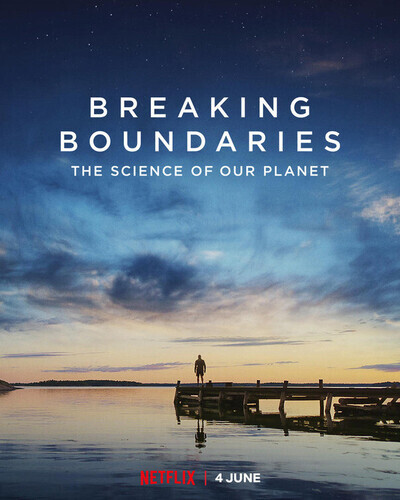 Breaking Boundaries: The Science of Our Planet (2021)

David Attenborough as Self