The movie begins, though, and for a very long time stays with, ice. Ice on a body of water that’s too thin to support the weight of a car. The movie doesn’t tell you exactly where it is at any given time, but here it’s with some police figures who drill and hammer through ice and then very gingerly try to hoist a submerged car. As the filmmaker widens his perspective, we understand the presence of a lake, or perhaps a bay, on which lunatics speed their vehicles. He actually captures, at 94 frames a second, one of those cars going under broken ice. Moving in for a closer view, we come to understand that one of the passengers has drowned. On the shore, a large village building is burning.

No narrator will come to our rescue here. Without any expositional assistance, we are going to spend the next hour and twenty minutes and change watching—and hearing—the awesome implacable power of water.

For some time people disappear from the camera’s view. Icebergs fall off of glaciers and into water, and rise up again, the noise accompanying them rather like an earthquake.

Sometimes the camera will just sit between ocean and sky, or hover above churning, roiling water. The abstract patterns it creates are dizzying and terrifying.

They get more terrifying when the sky turns gray. A sailing yacht is seen as a storm starts churning up. Two crew members turn wheels, climb masts, executing their moves with deliberation and trying to avoid haste. While knowing they need to work quickly. All this is conveyed without words.

Some will recognize Miami as it is pummeled by Hurricane Irma. Here one of the courageous (and, one has to say, foolhardy) filmmakers ventures outside and runs up a boulevard, its traffic lights hanging by wires after being unmoored from their posts, palm trees getting their fronds ripped off by the brutal winds.

People turn up again, in what appears to be a flooding cave. Here the amazing imagery attains a level of terrifying abstractness.

This is a purely sensationalistic cinematic experience that paradoxically encourages reflection and contemplation. Although the use of some (admittedly pretty good) heavy metal music on the soundtrack feels like a bit of overreaching. The guitar riffs rhyme with the growth of a tidal wave to such an extent you’re almost waiting for a gravelly bass voice to announce “EXTREEEEEEEEME WEATHERRRRR!!!!” The genuine awesome on display here doesn’t need that cheese injection. 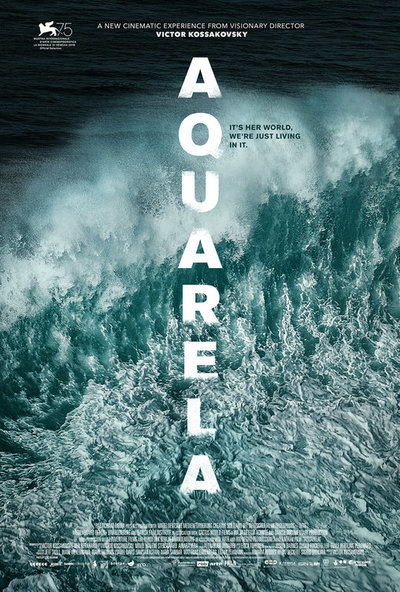