S. Craig Zahler’s debut genre-jumper “Bone Tomahawk” is a surprisingly sturdy Western—a piece with obvious nods to John Ford built around a quartet of travelers on a rescue mission—until it takes a sharp left turn and becomes something closer to horror. These kind of genre mash-ups rarely work, which makes the impact of “Bone Tomahawk” that much more impressive. In fact, it’s indicative of how little studios think of the Western that such a solid piece of work with such a strong cast is being barely released in theaters, while also making its VOD release today. The once-thriving genre has become the stuff of independent cinema in films like “The Salvation,” “Slow West,” “The Keeping Room,” and, now, Zahler’s debut. In terms of the overall quality of this quartet of films, that may not be a bad thing. We could be in the middle of an independent film Western renaissance.

“This is why frontier life is so difficult. Not because of the Indians or the elements, but because of the idiots.” Like most Westerns, “Bone Tomahawk” hinges on a number of questionable decisions. The first comes when Sheriff Franklin Hunt (Kurt Russell, sporting one of the best mustaches in the history of the genre) shoots a wanderer who calls himself Buddy (David Arquette) in the local saloon. Hunt’s Deputy Sheriff Chicory (Richard Jenkins) noted that Buddy had been acting suspicious, and caught him burying some likely bushwhacked belongings under a tree. Still, they can’t just let Buddy suffer, so a doctor named Samantha O’Dwyer (Lili Simmons) is called in to help, brought to the station by another traveler named John Brooder (Matthew Fox). She notices Buddy has a fever, and volunteers to stay at the station to monitor his status, even though her husband Arthur (Patrick Wilson) protests.

That night, Samantha is kidnapped by a group of savages. Despite an injured leg that he’s looking more likely to lose to gangrene every day, Arthur demands to be a part of the rescue mission for his wife. O’Dwyer, Hunt, Brooder, and Chicory hit the trail, and the majority of “Bone Tomahawk” consists of this vibrantly drawn quartet traveling across the barren landscape. Zahler, who also wrote the film, doesn’t overplay the archetypes, but allows each character to have his own space. Perfect casting helps: Russell has the weathered confidence that someone like Sam Elliott has been exuding for decades now, Fox does his best film work in a long time as a man defiantly proud of how many Indians he’s killed, Jenkins brings history to the kindly old man role and Wilson is convincing as a man who refuses to let his infirmity stop him.

While the casting agent deserves special citation for putting this posse together (bonus points for Sid Haig and Fred Melamed in cameo roles), it’s Zahler’s confident screenwriting and direction that make it work. His pacing can be a bit self-indulgent (the piece is way too long at 132 minutes), but much of the dialogue is witty without being forcefully so. We’ve seen so many self-aware Westerns, films that sound written by film school students more than of the time. Zahler’s script is clever and tight, and his direction sturdy throughout, although some may be turned off by the intensity of the final act, which includes a man being scalped alive and literally torn in half.

Personally, I like that “Bone Tomahawk” is willing to get as intense as it does in the final act, not merely throwing around words like "savages" to describe a race of people, but actually presenting brutally violent, nearly supernatural cannibals as its villains. While the genre jump from John Ford to Eli Roth may be off-putting to some, it raises the stakes on a climax in a way that most Westerns fail to do. Zahler and his talented cast are willing to take this journey deep into the heart of darkness, and it’s their commitment that makes the entire project more than skin-deep. 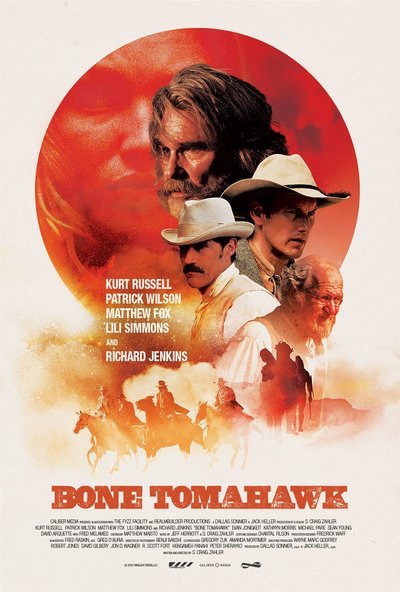