“Brad’s Status” might be the most Ben Stillerish movie Ben Stiller has ever made, and that’s actually a good thing.

The actor and director has made much of his career out of playing comically miserable men: self-centered, frustrated, passive-aggressively perturbed. In films including “While We’re Young,” “Greenberg” and to an extent the “Meet the Parents” franchise, these are arrogant characters who are easy to laugh at but difficult to like.

Despite the specific nature of the character Stiller plays, “Brad’s Status” finds a universality in the uncomfortable truths it explores: the human tendency to take stock, especially around middle age, and to compare our lives against both our friends’ achievements and our youthful visions of our future selves.

Brad’s not terribly happy with his status these days as he heads to New England to visit colleges with his teenage son, Troy (Austin Abrams). He has a comfortable life in Sacramento with his loving, easygoing wife, Melanie (Jenna Fischer), and a job running a non-profit, an extension of his lifelong idealism. Troy, a musical prodigy, is a thoughtful, talented kid with an obviously bright future—a legitimate contender for elite universities like Harvard, Yale and Tufts.

None of it is good enough, though. Rather than be purely proud and excited for his son, Brad uses the occasion to obsess over the successes of his own college friends, all of whom are doing far better than he is in his estimation.

Billy (Jemaine Clement) lives a life of hedonism in Hawaii after selling his tech company and retiring at age 40. Jason (Luke Wilson) is a jet-setting hedge fund manager who married into money. Nick (White himself) enjoys lavish luxury as a Hollywood director. But the one that kills Brad is Craig (Michael Sheen), an influential author and political pundit who teaches at Harvard—and who he finds he needs a favor from, leading to the film’s most exquisitely acted scene. With efficiency and great detail, White lays out who these guys are, as well as who they’ve truly become compared to Brad’s inflated ideas of them.

And we know how Brad feels about everyone around him all the time because he tells us in copious voiceover. It’s a device that seems smothering at first—a narrative crutch, even. But in time, it becomes clear that it’s meant to illuminate the divide between Brad’s perceptions and reality, between his insecurities and his neurotic analysis of those insecurities.

Brad also wrestles internally with how he feels about his son’s future, which manifests itself in such erratic ways that Troy rightly wonders whether he’s having a nervous breakdown. He alternates between reveling in the expected, reflected glory of his son’s potential and dwelling on the possibility that he’ll be too consumed by jealousy to be proud of him. In the vein of his previous screenplays for “Chuck and Buck,” “The Good Girl” and “Beatriz at Dinner,” White depicts the darker side of human nature with deadpan humor and daring honesty.

Abrams’ consistently calm, grounded presence provides an intriguing chemistry with Stiller’s tightly coiled demeanor. The young actor more than holds his own opposite his veteran co-star in scenes that are both quietly tense and unexpectedly lovely. Fischer’s role, meanwhile, feels underdeveloped beyond functioning as the supportive wife and mother.

But the film’s other main female character serves as its much-needed voice of reason: Shazi Raja as a musician friend of Troy’s who’s already studying at Harvard. Vivacious, intelligent and beautiful, she’s a reminder of the person Brad always wanted to be—but she’s also clear-eyed and confident enough to tell him the truth about himself, whether or not he’s prepared to hear it. She makes a devastating impression on him—and us—in just a couple of scenes.

Woven throughout is Mark Mothersbaugh’s discordant score, which grabs you from the start and provides the perfect accompaniment for the story of a man who takes himself far too seriously. Stripped down with staccato strings, it’s playfully melodramatic, an arch acknowledgement of the white, male privilege on display. By the end, Brad’s status hasn’t changed much, but there’s vague hope that he might strive for something resembling contentment. 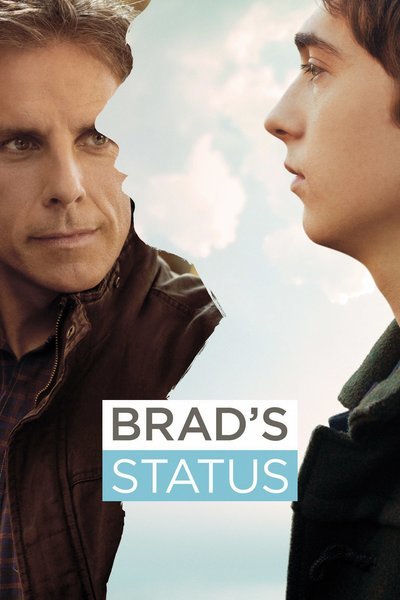