"Borrego," writer/director Jesse Harris' second full-length feature, is bookended by two serious informational screens, detailing how Fentanyl, and other drugs classified by the D.E.A. as Schedule II substances (in other words, extremely dangerous), have changed the game of drug smuggling at the border, and intensified the public health crisis of the opioid epidemic. This is an urgent topic, and not particularly well-served by "Borrego," as it unfolds along fairly typical lines: an innocent woman gets sucked into the larger drug war in a classic case of wrong place, wrong time. "Borrego" feels like a thriller, at some points, with said innocent bystander woman and a beleaguered deputy sheriff standing up to two representatives of the drug-dealing business in the canyons along the border between Mexico and California. Throw in the deputy sheriff's teenage daughter, hurtling across the desert on her scooter to rescue her father, and it's difficult to connect the film with those serious-minded bookends.

The film starts quietly, almost meditatively, with impressive drone shots of the desert, pitiless and gigantic in its isolation and vastness. A small figure strolls through the desolation, occasionally squatting down to peer at the random yellow flowers, blooming through the cracked dust and rock. This is Elly (Lucy Hale), a botanist doing a plant survey, searching for those flowers which, as she explains later, "aren't supposed to be here." An apt metaphor for Elly's eventual experience: she's "not supposed" to be out there either. On her way home, she witnesses a small plane crash into the desert. Horrified, she drives over to see if she can help, only to find the pilot, a man named Tomas (Leynar Gomez), injured but alive, surrounded by two huge bricks of what are obviously drugs. He trains his pistol on her. Elly frantically negotiates, telling him she can take him to where he needs to go (the Salton Sea area at the Southern end of California). Tomas and his hostage set off into the night.

Other figures are active in the desert. There's Alex (Olivia Trujillo), a teenage girl playing hooky from school, who comes across Elly in the afternoon before the plane crashes. Alex is strangely drawn to this older (but not by much) woman. Alex's dad Jose (Nicholas Gonzalez) is a local sheriff, overwhelmed by what's going on out in the desert. Then there's Guillermo (Jorge A. Jimenez), a dangerous dude living in a trailer, picking up the drugs that arrive and moving them on through the distribution channels. When Jose fails to show up, Guillermo, fearing he's been double-crossed, starts the hunt for the missing pilot.

These three story-lines trudge along on separate pathways until finally converging, in spurts of violence, on-foot chases, and mountain-canyon shoot-outs. Elly and Jose, forced to continue their journey on foot after a collision with a cactus, form an unusual bond.

The pace is often quite slow, with Elly and Jose's meandering journey dominating. The slowness is not necessarily a problem. It allows space for the larger issues drowning these two characters, those serious bookended texts about the gigantism of the pharmaceutical problem. Watching their dynamic, one can imagine a very different kind of film, with no shoot-outs or car chases, a film that allows this relationship to develop beyond bullet-pointed backstories. Lucy Hale is believable in her struggle to survive (although she never shows any signs of being sweaty, despite staggering across the desert for two days under a blazing sun), and Leynar Gomez is heartbreaking as a man who isn't really violent, but forced to it.

The pharmaceutical drug crisis is a distant and peripheral echo in "Borrego," despite those bookends. The new Hulu series "Dopesick," adapted from Beth Macy's amazing book of the same name, handles a similarly infuriating situation three-dimensionally, detailing how opioids ravage one Appalachian town, while Purdue Pharmaceuticals figure out how to market their "miracle drug" to doctors and hospitals in mostly working-class down-trodden areas. "Dopesick" is so angry that it's practically a call to arms. "Borrego" doesn't have the teeth of "Dopesick," despite—or maybe because of—its thrilling ending, with chase scenes, rapturous hugs, and fast-paced cross-cutting. There's something empty and obligatory about those elements.

"Borrego," an awkward thriller pasted onto a moody strangers-forging-a-connection drama, doesn't allow itself to be what it so clearly wants to be. 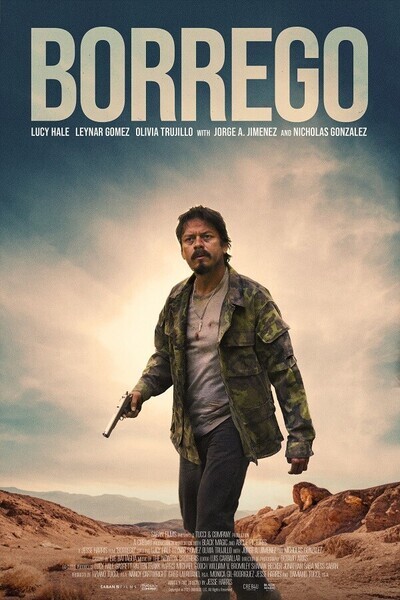 Jorge A. Jimenez as Guillermo