While many documentaries treat subjects that are also covered in books or magazine articles, certain exceptional nonfiction films remind you of the power and clarity that cinema can offer—especially concerning human subjects—compared to written accounts.

Case in point, Tania Cypriano’s “Born to Be” concerns the pioneering work in gender reassignment surgery being done by Dr. Jess Ting at New York’s Mount Sinai Center for Transgender Medicine and Surgery, and the film’s main characters are Dr. Ting and five of his patients. After seeing the movie, I imagined encountering the same material in a magazine article. The basic information conveyed might well have been the same, I realized, but my experience of it would have been radically different, because I would have missed the kind of direct encounter with the humanity of its subjects that cinema so uniquely affords.

From one angle, this has to do with Cypriano’s technique, which could be called immersive. From the beginning, we are seeing Dr. Ting in his work environment, both talking with and operating on his patients, and the perspective is as close and intimate as can be. Cypriano worked with just herself, a producer, and cinematographer Jeffrey Johnson (whose work is terrific) in the clinical filming situations, letting us get absorbed by the people in front of the camera without the interference that a larger crew would have entailed.

Another factor here, though, is the level of trust that exists on all sides. Quite obviously, Dr. Ting’s patients have invested a high degree of trust in him, and he responds by trusting them. But no less notable is the trust that all concerned have given the filmmakers. You can’t help but sense that all the patients got to know Cypriano and her crew well enough not just to be comfortable with their presence but to sense that they would tell their stories sensitively, honorably, accurately.

You might call this an aesthetic of compassionate complicity, and its benefits are evident throughout “Born to Be.” The film’s nuanced and engaging portraits begin with Dr. Ting, whose floppy hair, spectacles, and laid-back manner could as easily belong to downtown artist as to a renowned surgeon. And there’s a certain truth to that impression. He was a classical double bassist who excelled at Juilliard before switching to medicine due to pressure from a family that worried about the uncertainty of a career in the arts.

Excelling again in his new field, Ting was comfortably established as a plastic surgeon when the challenge of transgender medicine came along and gave him a new mountain to conquer. You sense that he quickly knew that this would be his life’s work, and that it was particularly suited to his makeup in two senses. First, it engaged his sympathy and skills in working with people, where his grasp of psychology is as important as his abilities in the operating room. Second, it seems to have spurred his willingness to be an innovator and a pioneer, constantly inventing new techniques and technologies in a field that is nothing if not rapidly developing.

In recent years, Ting has taken the lead in advancing the practice of both giving female sexual organs to born males (vaginoplasties) and male organs to born females (phalloplasties), along with other surgeries that help the patients physically realize their images of their chosen gender identities. The film gives enough discussion to the surgical strategies employed here to afford viewers an understanding of the medical issues and innovations involved with Ting’s work. Yet all of this might come across as dry and clinical were it not for something else that’s powerfully conveyed: the meaning of the operations for the people undergoing them.

The five patients the movie focuses on are an engaging bunch, representing different races, ages and backgrounds but all committed to their quests for self-transformation. Cashmere (as one male-to-female patient identifies herself) almost seems to personify recent decades of New York City transgender experience. Witty and self-possessed, she says she left home at 16 and suffered the trials of being identified as a gay youth before undertaking her first gender reassignment surgeries (crude early manifestations that she’s now looking to Dr. Ting to correct). Evidently once a part of the ball culture depicted in Jenny Livingston’s 1990 documentary “Paris Is Burning,” she says of the people shown there, “They are all dead.”

Two other African-American protagonists in “Born to Be” personify the determination and strength of character exemplified by people reaching for different sides of the gender spectrum. Mahogany was once a highly paid and very successful male model in South Africa (photos show a stunning image of muscular African male beauty) who gave it all up and plunged into poverty in pursuing her ideal of becoming female; she is now working with Dr. Ting on feminizing her facial features. Shawn, meanwhile, is a burly, bearded guy who says he always knew he was male; it just took Dr. Ting to make that a physical reality.

Two younger, white protagonists make their transformations while emerging from different kinds of family situations. Jordan, who identifies as non-binary (and prefers the pronouns “they” and “them”), had to battle their family’s incomprehension but now has the support of a partner in transitioning from female to male anatomy. Devin, who later goes by Garnet, came from Texas and was abused as an effeminate boy, but had a family that supported her lovingly and unequivocally (we see them and their feelings are moving and persuasive). Despite this comforting background, and the success of surgery that leaves her beautiful enough to work as a fashion model, Garnet says she is still drawn back to the “dark places” of despair and misery in her mind, a reminder that an estimated 45% of transgender people attempt suicide at some point.

In recent times, as transgender people have become more visible in culture, the news media, and the political sphere, debates have swirled around both the psychological and the sociopolitical issues involving them. Thankfully, “Born to Be” doesn’t try to delve into the rhetoric and intellectual formulations such disagreements produce. Rather, it escorts us into a world where genders are being transformed and says, “Look, see, these are real people with lives and personalities and dreams—behold them and make up your own mind.” A brave, revelatory, and beautifully realized film, it is easily one of the year’s best and most important documentaries. 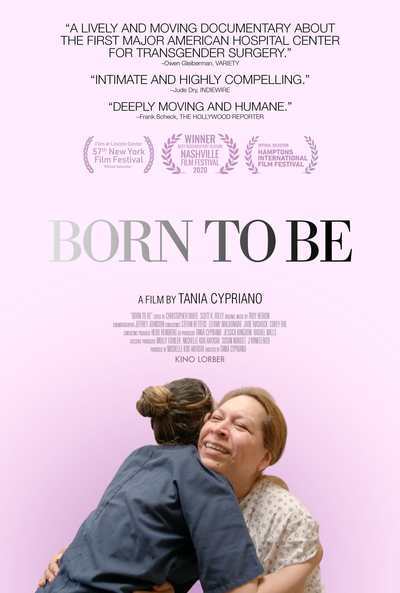