"Bonnie and Clyde" is a milestone in the history of American movies, a work of truth and brilliance. It is also pitilessly cruel, filled with sympathy, nauseating, funny, heartbreaking, and astonishingly beautiful. If it does not seem that those words should be strung together, perhaps that is because movies do not very often reflect the full range of human life.

Bonnie was a gum-chewing waitress and Clyde was a two-bit hood out on parole. But from the beginning, they both seemed to have the knack of entertaining people. Bonnie wrote ballads and mailed them in with pictures Clyde took with his Kodak. They seemed to consider themselves public servants, bringing a little sparkle to the poverty and despair of the Dust Bowl during the early Depression years.

"Good afternoon," Clyde would say when they walked into a bank. "This is the Barrow Gang." In a way Bonnie and Clyde were pioneers, consolidating the vein of violence in American history and exploiting it, for the first time in the mass media.

Under Arthur Penn's direction, this is a film aimed squarely and unforgivingly at the time we are living in. It is intended, horrifyingly, as entertainment. And so it will be taken. The kids on dates will go to see this one, just like they went to see "Dirty Dozen" and "Born Losers" and "Hells Angels on Wheels."

But this time, maybe, they'll get more than they counted on. The violence in most American movies is of a curiously bloodless quality. People are shot and they die, but they do not suffer. The murders are something to be gotten over with, so the audience will have its money's worth, the same is true of the sex. Both are like the toy in a Crackerjack box: Worthless, but you feel cheated it it's not there.

In "Bonnie and Clyde," however, real people die. Before they die they suffer, horribly. Before they suffer they laugh, and play checkers, and make love, or try to. These become people we know, and when they die it is not at all pleasant to be in the audience.

When people are shot in "Bonnie and Clyde." they are literally blown to bits. Perhaps that seems shocking. But perhaps at this time, it is useful to be reminded that bullets really do tear skin and bone, and that they don't make nice round little holes like the Swiss cheese effect in Fearless Fosdick.

We are living in a period when newscasts refer casually to "waves" of mass murders, Richard Speck's photograph is sold on posters in Old Town and snipers in Newark pose for Life magazine (perhaps they are busy now getting their ballads to rhyme). Violence takes on an unreal quality. The Barrow Gang reads its press clippings aloud for fun. When C.W. Moss takes the wounded Bonnie and Clyde to his father's home, the old man snorts: "What'd they ever do for you boy? Didn't even get your name in the paper." Is that a funny line, or a tragic one?

The performances throughout are flawless. Warren Beatty and Faye Dunaway, in the title roles, surpass anything they have done on the screen before and establish themselves (somewhat to my surprise) as major actors.

Michael J. Pollard, as C.W. Moss, the driver and mechanic for the gang, achieves a mixture of moronic good humor and genuine pathos that is unforgettable. When Bonnie tells him, "We rob banks,'' and asks him to come along, he says nothing. But the expression on his face and the movements of his body create a perfect, delightful moment.

Gene Hackman and Estelle Parsons play Buck and Blanche Barrow, the other members of the gang, as inarticulate, simple, even good - willed. When Buck is reunited with his kid brother, they howl with glee and punch each other to disguise the truth that they have nothing to say. After the gang has shot its way out of a police trap and Buck is mortally wounded, Blanche's high, mindless scream in the getaway car provides, for me, a very adequate vision of hell.

This is pretty clearly the best American film of the year. It is also a landmark. Years from now it is quite possible that "Bonnie and Clyde" will be seen as the definitive film of the 1960s, showing with sadness, humor and unforgiving detail what one society had come to. The fact that the story is set 35 years ago doesn't mean a thing. It had to be set sometime. But it was made now and it's about us. 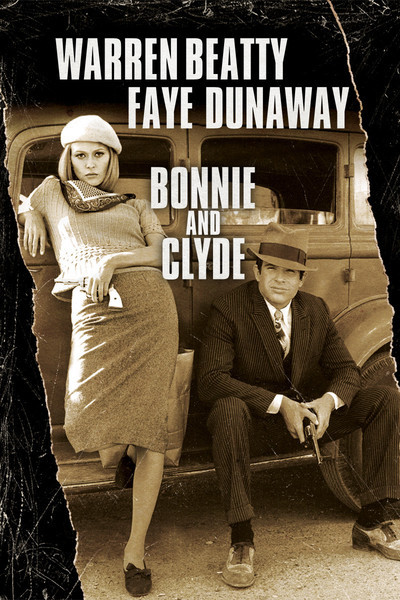