Boaz Yakin's coming-of-age horror movie “Boarding School” stars Luke Prael, who viewers of “Eighth Grade” might recognize as Aiden, the simple object of young Elsie’s affection. Here, he plays Jacob, a Brooklyn-born boy in the '90s who is sent to a boarding school because his mother is tired of him having screaming night terrors, and after his father catches him dancing in his recently-deceased grandmother’s clothes. Before this, Jacob attends the funeral of said matriarch, and hears from a strange woman about a time during World War II that she was repeatedly raped by a Nazi soldier while in hiding, until she was saved by Jacob’s grandmother, who had sharpened her teeth with a nail filer.

Jacob is just one of seven other students at this strange school, which is run by Dr. Sherman (Will Patton) and his wife Mrs. Sherman (Tammy Blanchard). Jacob learns that it’s a place for kids who have also been dumped there by their parents, like Phil (Nadia Alexander) whose face has been completely burned, Frederic (Christopher Dylan White), a boy with Tourette’s, Elwood (Nicholas J. Oliveri), who has an unnamed condition that causes him to shove scrambled eggs up his nose, and Christine (Sterling Jerins), who calls the lot “freaks.” In a barren classroom, they’re given a syllabus that consists of mostly the Bible, and are told that at the end of the semester in two weeks, they’ll have reached clarity. When someone steps out of line, a beating stick slides out from inside Dr. Sherman's sleeve, and he whacks them repeatedly. It's soon apparent that this isn't just Jacob's 12-year-old perspective thinking these bossy adults are evil, they legitimately are. Besides, a two-week semester? What kind of clarity is this?

Speaking of, Yakin's film offers little clarity with all of its hammy, left-field ideas, in spite of their originality when packaged as a horror movie. The young acting in “Boarding School” is nothing to write home about: their impressions of different mental illnesses are crude, and flat line-reading makes the band of kids a vacuum of intrigue, despite this being their grim adventure. A bigger spectacle involves the question of just how evil these adults are, but it leads to a shrug, not a shock. And even when the body count starts to rise quickly, it comes at a clunky progression. By the second half, you watch the movie practically implode, even though you were barely interested when everything was finally set up.

All the while, the history of Jacob’s grandmother lingers, with him having visions of her in that loft, her back to us while she sharpens her teeth. Though it provides bookending horror images to script, it makes for an uncomfortable parallel between this cheesy funhouse and the real-life trauma brought upon the Jewish people in World War II; Jacob is clearly coming-of-self but also coming to terms with a horror in his family's past, it's more that writer/director Yakin is very clumsy when articulating all of this using the horror genre. I would, however, love to read a deeper dive into the queer imagery of the story, the way that Jacob faces his fears towards his sexuality and harm that can be done by others. It at least provides more of a pulse to the story than its few overzealous jump scares.

This is a very odd movie, as you can see, but Patton knows that too. His Dr. Sherman sloppily plays the scales of a James Cagney accent, erratic in a way that becomes somewhat entertaining. His reading of “I have always been con-soined with the soul” broke me, I must admit, but at least my laugh shook me from boredom. But as his character kept prattling on about his nefarious details, I found myself trying to imagine what cartoon character Dr. Sherman could voice if he got into a different line of work. A crow with a cigar in his mouth felt most accurate.

“Boarding School” has some edge by being told from a child’s perspective, even though it's not for kids. A lot of great directors have told this kind of story, and while Guillermo Del Toro might be the most popular living one to do it, it’s Louis Malle that comes to mind. “Boarding School” owes to Malle’s way of observing childhoods as traumatic and impulsive, without softening memories with innocence, as in his “Au revoir les enfants.” But he once made a movie called “Murmur of the Heart,” a dark comedy about a goofy bourgeois boy who has sex with his mother. I wonder what Yakin’s remake of it would look like. 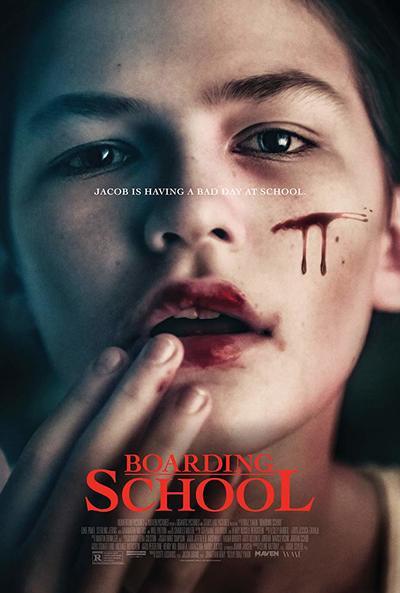 Will Patton as Dr. Sherman