The consequences of seemingly innocuous careless moments, the inexorability of fate, and the possibility of grace or just mere reconciliation in the face of disheartening catastrophe: these are the themes of “Bluebird,” the debut feature from writer/director Lance Edmands. The movie is set in a Maine logging and paper-manufacturing town that is deliberately made to seem at a far remove from the larger world. (Edmands peppers the film’s soundtrack with gentle, moody, vintage tunes from the likes of The Fleetwoods, which contributes a slightly eerie, floating-atop-time feel to the picture.) School bus driver Lesley (Amy Morton) is established as conscientious and caring by the way she donates her own wool cap to a youngster who forgot to don one on the bright winter day on which the film opens; still, her solid character doesn’t prevent her from making an erroneous head count after she parks the bus. Combine this with a single mom who blacks out in her bathtub before it occurs to her to wonder where her child is, and, well…

The boy, nearly frozen overnight, winds up in the hospital with a highly diminished function. Lesley is devastated and wracked with guilt; her husband Richard (John Slattery) and adolescent daughter Paula (Emily Meade) are hard-pressed to process the events. As is the boy’s mother, Maria (Louisa Krause) and his tough grandmother Crystal (Margo Martindale).

“Bluebird” proceeds quietly from this shattering, bleak point. Edmands’ scenario provides plenty of opportunity for narrative twists and social commentary, but these aren’t the areas of interest for the filmmaker. Rather, he’s interested in the people, and what they look like, how they behave, as they cope, or fail to cope. The resolution of the film doesn’t come in the form of a “eureka” moment in the investigation, or the filings of the lawyer who cagily presents his services (and hints at their potential rewards) to Maria and Crystal at the hospital. It comes in the looks on the faces of the characters as they make the determination to try to live their lives.

It’s not easy. Lesley in particular cannot find her way out of the rut of grief and shame she feels at her mistake; to see it compounded by the loss of her job is stomach-churning. Richard’s frustration finds a transformation into potentially destructive, ultimately impotent rage. Paula’s resentment at having what should be a fun time in her teens turned into a supporting role in a tragedy also comes up against a wall. And Maria’s anger and denial explode in a confrontation with Lesley that solves nothing.

The cast members are all exceptional; while the movie’s incredible roster of acting talent suggests an ensemble piece, the structure of the movie patiently presents a series of scenes between two or three characters (Adam Driver also has a role as a co-worker of Maria’s, and acquits himself stolidly). The ultra-widescreen cinematography of Jody Lee Lipes makes the viewer feel the cold of the setting, the near-desolation of the long winding roads that swing around the forest that feeds the paper mill. All of these views suggest a striving toward spiritual epiphany, on the part of both the movie’s characters and the movie itself. The nature of the setting in a sense suggests Faro, the island on which Ingmar Bergman set and shot some of his most bracing studies of humanity and God, or the lack thereof; Edmands’ clear appreciation of the expressive qualities of a non-expressive human face is in the tradition of Bresson. Which is not to say that the filmmaker has hit those particular heights here.

The movie, like so many independently-produced character-driven dramas these days, is too fond of its two-note-piano-chords-and-strings score (although this one, by Daniel Bensi and Saunder Jurriaans, has a little more modernist heft than most), almost to the extent that one gets the feeling Edmands didn’t entirely trust his own images. He ought to have. “Bluebird” can be a tough film to watch—given that this reviewer lives in New York, which has been undergoing a frigid snap like nobody’s business, and has also been to a hospital every day for a week visiting a relative (who is recovering well, no worries), it is not the sort of thing I’d actually be inclined to sit through left to my own devices at the moment—but it is a distinctive one, and the director is worth your attention. 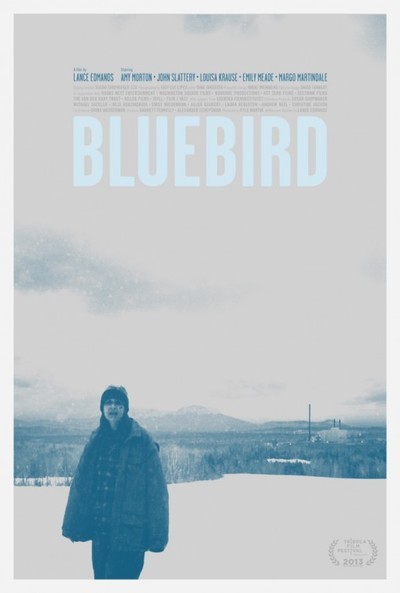