What if you could almost literally get a look at the path not taken? What if you could consider the differences between the teen you and the adult you in stark contrast? Would you regret the choices you made? Would you change your life? “Blue Jay” is a gentle, genuine trip down memory lane that features one of our best actresses in the kind of role she doesn’t get to play that often, and another great turn in the arc of an independent film icon. It’s a two-hander through and through (there’s only one other speaking role at all and it’s minor) and the two leads are more than up to the challenge, giving so much to one another that we fill in the history of their relationship and the years they’ve spent apart. The final act has a twist that doesn’t particularly work for me (mostly in that I wish there was no revelation in that moment at all) but the performances are so truthful that it doesn’t really matter.

Jim (Mark Duplass) has come home to take care of his mother’s house after her passing. He’s also clearly got some other issues going on, and Duplass is excellent at subtly capturing a man who often appears on the verge of tears. When his high school sweetheart Amanda (Sarah Paulson), home because her sister is about to have a baby, runs into Jim at the grocery store, she too senses an undercurrent of sadness. Perhaps that’s why she agrees to get some coffee with him and then go back to his house to drink, play, laugh and talk about their lives. He needs a friend, and they used to be much more than friends. In his childhood home, they find old love letters and tapes they made together. In one recording, they play-act their 20th wedding anniversary. Being able to listen to a teenage version of yourself pretending to be the age you are now sounds absolutely terrifying to me.

After listening to that tape, the somewhat-tense dynamic between Jim and Amanda softens. They decide to play-act again, pretending to be a married couple celebrating over dinner. They dance to Annie Lennox. They talk about their lives and their issues. In a sense, they are still those sweetly romantic kids, but jobs and families and other trappings of adulthood just got in the way. They act goofy, almost too much so, but the actors make it feel believable that they’re really acting like teenagers again.

There’s so much fine detail in the acting work, especially by Paulson, who was so drastically different in her Emmy-winning role on “The People v. OJ Simpson” that everyone who saw that should watch this just to see her remarkable range. Her take on Amanda contains so many subtle layers. There’s a scene early in their time at Jim’s home in which she just laughs and moves her body ever so slightly into his, conveying a comfort through body language, an underutilized tool of the modern actor. “Blue Jay” is a dialogue-driven piece, of course, but it works because of what’s unsaid verbally and what we get from a look by Duplass or a laugh from Paulson. They are both fantastic here, especially her. It’s one of my favorite actress performances of the year.

Of course, there’s a shadow that hangs over “Blue Jay” in that the question of why Jim and Amanda broke up in the first place isn’t answered until the climax, and that makes it a bit more of a “mystery” than I would have liked. I’m also not sure that, as good as he is the rest of the film, Duplass quite nails the big reveal, although Paulson makes up for it. More than judging it individually, I just wish that movies like this would either reveal the break-up cause early or not at all, making it more about where they are now than the mystery of how they got there.

Having said that, I’m a sucker for two-handers with performances this good. I always have been and I always will be. It’s probably my theatre background, or simply my adoration for Richard Linklater’s “Before” trilogy. It could also easily be because of how saturated we are with CGI blockbusters lately, and how much I appreciate it when a film goes back to character and gives us people who feel like we could know them. Or, at their best, like we could be them. 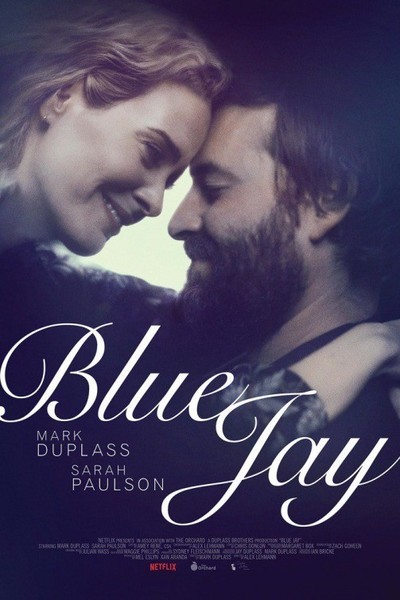