In "Blue Iguana," Eddie (Sam Rockwell) and Paul (Ben Schwartz) are ex-con buddies, working at a New York diner and trying not to screw up their parole. Into their world strolls Katherine Rookwood (Phoebe Fox), a British lawyer for a sketchy international businessman named Arkady (Peter Polycarpou). It's hard to keep the details straight but the gist of it is: she's beholden to Arkady for some cash and he's making all kinds of threats. He tells her if she can retrieve some stolen bonds, he will forgive her debts. She hires Eddie and Paul to come to London (thereby violating their parole) and pull off the job. None of this makes much sense and it all goes down in the first scene, before you even get your bearings as to who everyone is, where they're coming from, what the stakes are.

Written and directed by Hadi Hajaig, "Blue Iguana" is sort of a genre exercise, but there are moments when it wants to be taken seriously, too. It's a heist movie, where a ragtag group of con men and ex-cons team up, and then mid-way through decide to go for a much bigger fish. The inspirations for "Blue Iguana" come from movies and comic books, not from real life. There's not anything wrong with that necessarily (Tarantino has been very successful doing the same), but without an establishing tone or style—the first scene sits there on the screen like a void—it can come off as trying to jump on some already-long-gone bandwagon.

Once they get to London, Eddie and Paul participate in a series of shoot-outs and fights filmed with a mix of slo-mo and speeded-up action. Bullets fly, bottles explode, wood shatters (nobody in the movie appears to be a good shot). These extremely over-stylized sequences really engage Hajaig. A lot of thought and care have gone into them, but the pumped-up fights come out of another movie altogether. They don't fit at all. "Blue Iguana" is about two goofy guys who get into a situation way over their heads. They aren't ninjas or masterminds. They're bumblers. The violence and gore in "Blue Iguana" is extremely jarring, underlining the impression that it's a feather-light romantic comedy yearning to be free of its Tarantino trappings.

"Blue Iguana" is filled with many "hat tips" to other movies ("Reservoir Dogs," "True Romance," there's even a "Weekend at Bernie's" nod, and there's a gun hidden in the bathroom straight out of "The Godfather," ruined by Paul commenting on it with "I'm not Al Pacino!"). There's so much of this that "Blue Iguana" feels like a series of parody sketches. At times, though, "Blue Iguana" achieves a certain goofball charm. The movie finds a groove about 25 minutes in (a long time to wait). Hajaig leans heavily on the actors to fill in the blanks, provide humor. Rockwell and Fox, in particular, do wonderfully well with this—as does Amanda Donohoe in a small role, but it's too heavy a load placed on the actors.

There are moments where you can feel something "real" bubbling up onscreen. Katherine may be a snooty British glasses-wearing woman but she speaks with her mouth full, her lips always covered in crumbs. There's legitimate sexual chemistry between Eddie and Katherine, but they are both so awkward they can't deal with it. Hostility signaling love/lust has a long movie pedigree, and in these sequences you can see what really interests Hajaig. Forget the Sergio Leone-via-Tarantino slo-mo shoot-em-up ballets. Forget the plot itself. The real spark onscreen is what is going on between the woman pigging out on a burger, and the guy staring at her from across the table, wondering why he's so attracted to a woman with French dressing dribbling down her chin. Rockwell and Fox are very funny and very strange together. You get weirdly invested in them.

In the mid-to-late 1990s, Sam Rockwell was a big fish in the small pond of independent film. Some of the films he made were very bad, some were very good ("Box of Moonlight," "Lawn Dogs"), but he always stood out. For those of us who had started to track him, he was often the reason to go see some of these movies. He was handsome, but in a very "real guy" way. He wasn't self-serious. He was a bit of an oddball. "Confessions of a Dangerous Mind" was George Clooney's directorial debut, and so it got a lot of attention. Clooney recognized Rockwell as an eccentric and gifted actor, and gave him free rein. "Confessions" didn't exactly turn Rockwell into an A-list star, but being a star didn't seem to be what interested him about acting anyway. One of his best performances was in Duncan Jones' "Moon," a haunting sci-fi film where he plays a double role (astronaut Sam Bell and his possible clone). He's the only person in the film and it's a mini tour de force. Taking small parts in movies like "Iron Man 2" and "Cowboys and Aliens" probably gave him the financial stability to keep appearing in theatre productions and smaller risky films. (I saw him play Stanley Kowalski in a 2011 production of A Streetcar Named Desire at Williamstown. He was breathtaking and—the biggest feat of all—made me forget Brando's original performance while I was watching him.) Rockwell won an Oscar last year for his supporting role as Dixon, the racist cop in "Three Billboards Outside Ebbing, Missouri," but if you look at Rockwell's career as a whole, Dixon is an anomaly. It's not really what he's all about. Last month came the news that Rockwell would be playing Bob Fosse in an upcoming limited series on FX. Rockwell can dance, in his own bizarre way, and the thought of him as Fosse is already thrilling. Time will tell.

In his interview in the 2009 documentary "I Knew It Was You: Rediscovering John Cazale," Rockwell spoke eloquently about Cazale's influence and example, especially in regards to the goldmine that is the "beta male" character. Most male actors want to play Michael Corleone, Rockwell observed, but Cazale showed men the possibilities in Fredo. Rockwell brings that to bear in "Blue Iguana." He's not afraid to look foolish or weak. He can find the humor in a pause, a thought, a gesture. He dials it all down and focuses solely on Phoebe Fox. He understands that's the only arc that really matters. 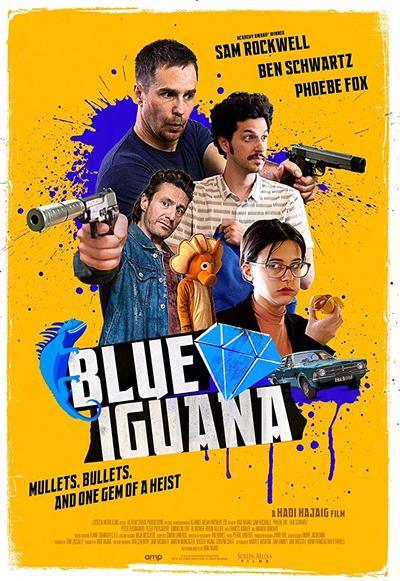