Blow the Man Down

“If you ain’t into fishing, you’re in the wrong place.” So sings the burly, bearded, sort-of Greek chorus of this coastal small town shaggy dog tale of homicide and how not to cover it up. Priscilla (Sophie Lowe) and Mary Beth (Morgan Saylor) are young adult sisters whose mom, who ran what looks like a fairly decrepit kinda sorta hardware/supplies store, have just lost said mom, and even then can’t stop squabbling. Priscilla is intense, sensible; Mary Beth is wide-eyed and impulsive. Impulsive enough that the evening of her mother’s burial she lets a local dirtbag take her to his place.

Outside of which Mary Beth discovers evidence that suggests the dude is a serial killer. He definitely wants a piece of her, and in the worst way, and in the ensuing struggle she harpoons the guy. Enlisting her sister to help dispose of the corpse, they use a gutting knife to cut off the guy’s limbs so he’ll fit more easily into a picnic cooler.

Directors and co-writers Bridget Savage Cole and Danielle Krudy don’t get too grisly in their depictions but they put their points across. The little town Mary Beth and Priscilla want to leave is a hotbed of other extra-legal activities, including prostitution (those fisherman need some recreation) and illicit dealings that see a grocery bag filled with cash land in Mary Beth’s lap. Just what she could use in this situation, really.

Saylor and Lowe are amusing in their depictions of befuddlement and desperation. And it’s interesting and largely fun to see a movie inflected with humor reminiscent of Woody Allen (well, come on, the Greek chorus device was done by Allen in “Mighty Aphrodite”) and the Coen brothers with female protagonists at its center. But the older females in the cast nearly walk away with the film. Margo Martindale is a quiet scream as Enid, the madam with a real you-can’t-tell-me attitude. Marceline Hugot, Annette O’Toole, and June Squibb are also delightful as the town’s three moralistic biddies, at least one of whom turns out to be a trifle more tolerant than she appeared. These formidable females pull fast ones on each other, and on the town’s generally ineffectual males, with funny deftness. “Blow the Man Down” isn’t an earth-shaker, but it’s a small pleasure that makes you wish for more from its filmmakers, and soon. 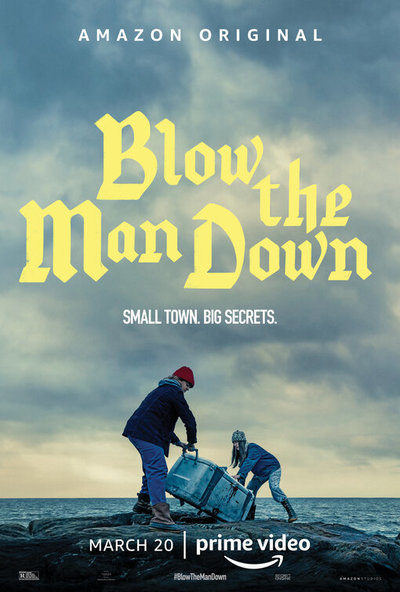 Rated R for language, some violence, sexual material and brief drug use.