Vin Diesel fans who can’t wait for the next installment of the “Fast and Furious” macho soap opera series can get their fix at “Bloodshot,” a comic book adaptation that’s as big a stickler about “family” yet far less satisfying than even the worst films of the "Fast" franchise. The family in question here is the wife of Ray Garrison (Diesel), who is put in danger by her spouse’s mercenary soldiering. Now, if you want to walk into director Dave Wilson’s sci-fi actioner as blindly as I did, exit this review now. If you desire a hint of what you’re in for, let me leave you with a few phrases you would have encountered had you stuck around: “Universal Soldier,” “robotic cucarachas,” “needle drop abuse of the Talking Heads” and “blatant rip-off.”

Even though “Bloodshot” is an adaptation of a comic book (unread by me), screenwriters Jeff Wadlow and Eric Heisserer take their cues and their plot details from a slew of far better movies in this genre. Films like “Terminator 2: Judgment Day,” “Robocop” and “Total Recall” are thrown into a blender and the diluted, flavorless results leave you hankering for the original ingredients. The most noticeable influence is “Universal Soldier,” a film that shares so many plot elements that “Bloodshot” can be classified as a blatant rip-off. That movie spawned three sequels; I can only hope “Bloodshot”’s bloodline ends here.

Adding insult to injury, the screenwriters do that self-defensive meta thing that drives me up the damn wall, where they have characters acknowledge “hey, we’re ripping this particular movie off” and “hee-hee-hee! Aren’t these genre tropes that we’re using really dumb and tired?” There’s such insincerity and passive-aggressive cowardice in this approach; it either invites the audience to feel superior to the material or worse, it acknowledges that the filmmakers know they are peddling an inferior product to the consumer and they think you’re a sucker for buying it. I have more respect for a movie that damns the torpedoes, fully commits to its madness, and goes down in flames than one that intentionally sets itself on fire as a precautionary measure.

Case in point, and here there be spoilers: “Bloodshot” begins with Garrison returning home after a successful mission. He spends a romantic night with his wife, Gina (Tallulah Riley) before being ambushed by henchmen employed by Martin Axe (Toby Kebbell). Axe is a wacky piece of work with a sadistic streak—in other words, your typical action movie villain. Taunting a tied-up Garrison, he puts on a goofy coat and dances to “Psycho Killer.” Responding to this needle-drop abuse of the Talking Heads, I wrote “'Psycho Killer'? REALLY?!” in my notepad. Ten seconds later, I wrote under that, “OK, I’m down.” Later, the villain of the piece, Dr. Emil Harting (Guy Pearce) makes a snarky comment about the film’s use of the song and how stupid it is. It’s as if the filmmakers anticipated my initial response but had no faith that I’d eventually buy into their idea and go along.

The person responsible for the musical choice in the film’s universe is Eric (Siddharth Dhananjay), the techie who runs Harting’s simulator. See, Garrison is actually a re-animated dead soldier who’s been implanted with false memories of his wife’s murder so that he can take brutal revenge on Harting’s enemies. The simulator implants the same exact remembrances in Garrison’s head but changes the identity of the dancing killer. The simulator keeps the song, however, which makes the dialogue calling attention to it even more obnoxious. In a stunning self-own of “Bloodshot”’s writers, Eric supposedly crafted Garrison’s quest from the pieces of other action movies. Harting points out that he did a lousy job right down to the penis jokes. Nevertheless, it’s an effective facsimile because Garrison does the execution every time his brain is rebooted.

Assisting Garrison, or rather, playing their parts in this endless loop of wrongly accused men being splattered, are KT (Eiza González) and Jimmy Dalton (Sam Heughan), two formerly dead or injured soldiers who have benefitted from Dr. Harting’s robotic initiatives; she now breathes through a waterproof apparatus and he has had his legs replaced by super-appendages. Harting himself has a powerful robotic arm that is clearly modeled on the Nintendo Power Glove. When his charges become insubordinate, he punches a few buttons on the computer in his artificial limb to torture them.

Garrison has the most impressive features of all. His blood cells have been replaced with tiny insect-like creatures whose job is to quickly knit his body back together when he’s injured. They make him invincible and practically immortal because you can’t kill something that’s already dead. This allows Garrison to take hundreds of bullets, get run over by a truck, and survive point blank grenade explosions. After each PG-13 friendly incident of carnage, these robotic cucarachas get to work reconstructing our hero. As luck would have it, I have a thing for robotic roaches cultivated by the 1984 Tom Selleck movie “Runaway,” so these little buggers are responsible for the one star part of my grade above.

Earning the extra half-star is Lamorne Morris, who wields the wonderful moniker of Wilfred Wigans. Wigans is also a techie who is such a legend in the field of robotic programming that Eric stole his open source code to use in Garrison’s computerized body. This is a crucial plot point, because at some point you know Wigans is going to hack into the servers controlling Garrison. The programmer in me found hilariously entertaining the mere notion that something this ridiculously powerful and dangerous came from an open source platform, and I really enjoyed Morris’ accurate and funny portrayal of my coding brethren. If you’re not a coding geek like your humble reviewer, remove that half-star.

Meanwhile, the action sequences look like they were edited by a Cuisinart. They’re almost impossible to follow, and I saw this blown up on IMAX. The “Mission: Impossible”-inspired climactic skyscraper elevator battle could have been spectacular had it not lacked any sense of physical space and geographical layout. Additionally, the CGI leaves much to be desired, though there is one virtuoso sequence where an entire neural network-simulated location is assembled around Pearce and Diesel. The camera movements, editing and design come together to evoke a sense of wonder and non-ironic commitment that I wish were spread throughout the rest of the movie. Instead, “Bloodshot” is a bad, self-aware actioner that writes its own negative review on the screen as it unfolds. 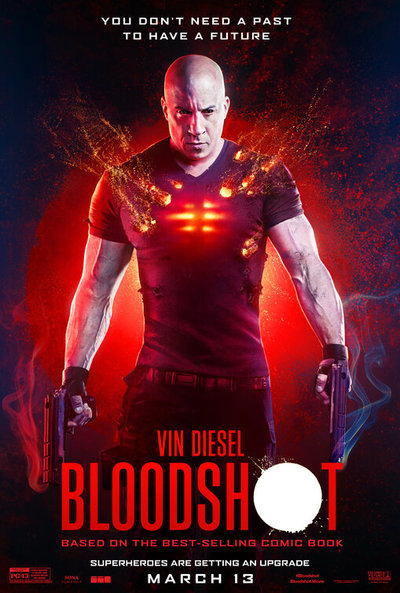 Rated PG-13 for intense sequences of violence, some suggestive material and language.