One of the most famous moments in Muhammad Ali's storied career came directly following his triumph over Heavyweight Champion Sonny Liston in Miami Beach, on February 25, 1964. It's an understatement to say that Cassius Clay (he had yet to change his name) was the underdog, and that Liston, who had recently knocked out Floyd Patterson (twice) was perceived as the intimidating and inevitable winner. But Clay won. As all hell broke loose, Clay ran to the ropes, shouting at the reporters who doubted him: "Eat your words!" Then, surrounded by a crush of exhilarated people, Clay shouted, over the mayhem, "I SHOOK UP THE WORLD!" I was not alive then, but watching the footage gives a vicarious thrill, and those who were there still feel the electricity when they speak of it. This moment, and many others, are captured and discussed in Marcus A. Clarke's informative and engaging documentary "Blood Brothers: Malcolm X & Muhammad Ali."

How these men intersected has been covered in documentaries, books, as well as multiple fictional portrayals, like last year's "One Night in Miami" (directed by Regina King), Spike Lee's "Malcolm X" and Michael Mann's "Ali." The EPIX series "Godfather of Harlem," with Forest Whitaker as "Bumpy" Johnson and Nigel Thatch as Malcolm X, looks at the vibrant world of 1960s Harlem, where Malcolm X operated. "Blood Brothers," based on the 2016 book Blood Brothers: The Fatal Friendship Between Muhammad Ali and Malcolm X, co-written by Purdue's Randy Roberts and Georgia Tech sports history professor Johnny Smith, bring the friendship front of center. Roberts and Smith are the primary interviewees here, acting as guides through the complicated timelines, bolstered by the copious extant documentary footage of speeches, interviews, press conferences, weigh-ins, etc.

What happened matters, but what also matters is the lasting impact these two men, and their relationship, had on the culture. Through Ali and Malcolm X the history of the 20th century can be seen, with conflicts and accord writ large in their friendship (and then their "breakup"). Clarke does an excellent job of laying it all out, presenting Malcolm X's story, and then Cassius Clay's, so that their eventual meeting is placed in a larger context. Helping in this are commentators like Harvard's Cornel West, Todd Boyd, professor of media studies at USC, and oral historian Zaheer Ali. There are also interviews with people who knew Ali or Malcolm X personally, including the now-adult children of both men.

Everyone involved has a different version of what went wrong. There are still competing interests at play. Was Malcolm X's interest in Ali self-serving to some degree? Ali choosing Elijah Muhammad, the long-time leader of the Nation of Islam, over the shunned Malcolm X still seems hurtful, as do Ali's public comments about Malcolm ("He's just one individual that went astray," meaning: disagreed with Elijah Muhammad), to reporters, to William F. Buckley, of all people. The FBI's role in all of this is highlighted, building on the revelations of "MLK/FBI," released early this year.

Animated sequences in documentaries are now an overused cliché, and should probably be retired unless it's an essential part of the storytelling. Thomas Brenneck's score, performed by the Brooklyn-based Menahan Street Band, is a vivid mashup of funk, soul, jazz, steeped in New York, supporting the different sequences with an appropriate big-ness. The montage of footage—New York street scenes in the 1950s, 1960s, the press conferences, speeches, footage of the men getting off airplanes, surrounded by a crush of people, or laughing together, talking together, is mesmerizing. Individually and together, both men “shook up the world.” “Blood Brothers” shows why. 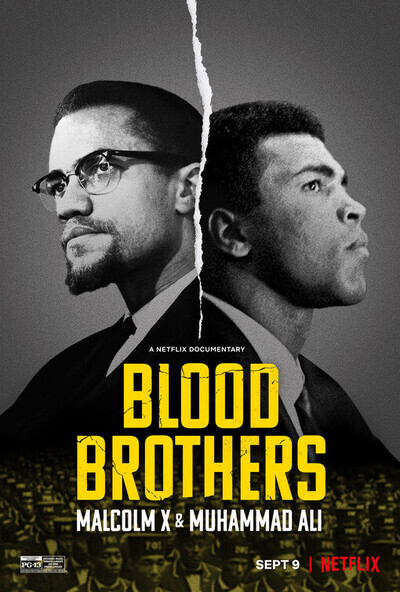 Malcolm X as Himself

Muhammad Ali as Himself