A gentle female voice describes a tree in a field. And then we see the field. Then, a dog. The dog changes. It is a different dog. Now, an apartment, a restaurant, an office. Things that can be easily visualized either from your own memories or what you've seen in film. For Ingrid, the narrator and protagonist of "Blind," even that ability to visualize will fade away. She's been told to work on it, to practice it like a muscle or risk losing it, to practice visualizing things from a life before she began to go blind.

With "Blind," writer/director Eskil Vogt shows remarkable confidence in his directorial debut after working with Joachim Trier as the screenwriter on the highly acclaimed "Reprise" and "Oslo, August 31." He is a deft visual artist, recognizing that the art of filmmaking is not unlike what his protagonist goes through in "Blind." Just as she has to visualize a world she's beginning to forget, it is Vogt who uses images in ways that can sometimes deceive the audience. Are we watching what Ingrid imagines or what is real? Of course, nothing in "Blind" is "real," it is from the imagination of the filmmaker. And it is when "Blind" begins to fold in on itself, becoming almost Charlie Kaufman-esque in its multi-layered examination of artifice and reality, that it reaches another level of filmmaking. This is an excellent, daring piece of work.

Having gone blind in adulthood, Ingrid sits around most of her days. She tries to remember things. She hears sounds in the distance. She often wonders if someone hasn't snuck in and is watching her. She begins to imagine a story of a similarly lonely man who spends most of his days surfing the internet for pornography: another world in which "reality" is difficult to define. The man starts to develop fetishes—heels, stockings, hair, other perversions now available via porn site search engines. Eventually, he feels a need to be close to real women, watching them in the park or jogging down the street. The way a woman's hair falls down her back becomes much sexier than anything he can find online. Vogt is playing with sensory stimulation: a glance, a smell, a brief passing touch on the street. Then, the man sees a woman across the street from his apartment through a window and enters a new world of stimulation through voyeurism. Again, the act of seeing, which Ingrid can no longer do, becomes primally thrilling.

And then we're taken into the story of the woman across the street, Elin, a lonely soul, and the story expands further. Elin is away from her son. She spends most of her time on her own, watching TV. Like so many people in big cities, she seems alone even when surrounded by a crowd. Then our two lonely souls cross paths. Even here, Vogt plays games. They have a conversation in a grocery store that we realize was only in his head as it flashes back and she has not spoken to him.

Are these real people? Are they just in Ingrid's head? Well, at this point, isn't everything? Are these stories of equally lost souls cries for help? Are they "blind" too in the sense that they lack basic human connection? Ingrid is certainly an unreliable narrator, a writer who is unsure of the newly dark world around her, and increasingly suspicious of a husband that she believes is cheating on her. Imagine laying in bed at night and hearing your spouse type away to someone in online chat and having no idea if he's flirting. Ingrid starts to crack.

Vogt and his team have a visual language that exists somewhere between reality and dream. The simple apartments and focus on common items keep the film grounded in reality in a necessary way, especially given the surreal aspects of the narrative. In one sense, "Blind" is merely about a writer who cannot see anymore and the physical and emotional toll that it takes. In another, it is about those human elements that transcend the five senses—loneliness, jealousy, fear, etc.—and how they are heightened in times of stress. However you interpret it, Vogt's film lingers, haunting like imagery that refuses to fade away in memory. 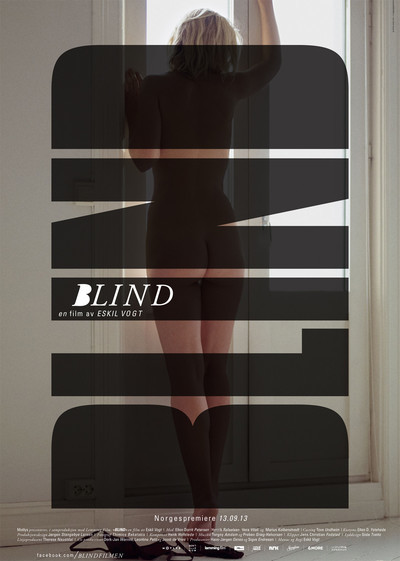