In “Blessed Child,” filmmaker Cara Jones looks back at how she grew up in a family that was heavily involved with the Unification Church, a organization (some would say “cult”) that was founded and led by Korean evangelist Sun Myung Moon, and surged in popularity in the United States in the 1970s and 1980s. Years after having left the group, Jones tries here to process those experiences while coming to terms with the fact that her parents are still members. This sounds potentially fascinating and indeed, it contains some moments of great power. However, the film is a little too scattershot for its own good, which becomes especially frustrating when some of these detours actually come across as potentially being far more interesting than the central narrative thread.

Jones and her family were not just ordinary run-of-the-mill members—her father, Farley, a onetime atheist, was president of the church from 1969 to 1972, and, as a result, her entire family was looked upon as something special. Like the others, Jones devoted herself to the organization and in 1995, she even took part in one of the infamous mass weddings that Moon used to preside over, marrying a man that she had only barely met and whom she was matched with after submitting a high school photo of herself. By this time, however, Jones was beginning to have second thoughts about the church and when she went to attend Princeton shortly after the wedding, her disenchantment with the group and her husband, whom she would soon divorce, grew and eventually led to a falling out with her parents. Now, more than a decade since her final break with the church, she tries to come to terms with her experiences in order to move on with her own life, as well as her desire to find a way to maintain a relationship with her parents despite their continued involvement.

In recounting her story, Jones takes a deliberately erratic approach that is presumably meant to mirror her own unsettled mindset. There are scenes in which she guides us through what her days in the church were like with the aid of a treasure trove of archival materials, ranging from home movies of the family to fascinating footage of actual organization events. There are also scenes in which she interviews other former second-generation members to talk about what happened when they found themselves at odds with a lifestyle that they had no say in choosing for themselves. In select moments, she talks to her brother, Bow (who also serves as cinematographer), about the agonies he went through growing up homosexual in an organization that was virulently anti-gay.

Two problems arise with this particular approach. The first is that by including all of these side issues along with the main narrative of Jones trying to come to grips with her past in order to pave the way for her future, the film (which only clocks in at 73 minutes) neither delves into any of them with any particular depth, nor figures out a way to tie them in to her own story. The other problem, quite frankly, is that a number of these side stories actually prove to be more interesting than Jones’ own saga. Bow’s story, in particular, could have easily been spun out into a potentially powerful story in its own right. By comparison, Jones’ still-conflicted feelings about her experiences lead to a number of moments where it feels as if she is pulling punches so as not to offend. Towards the end, for example, she asks her father some pointed questions about how he can still belong to a group that stresses the importance of family while at the same time asking its members to put the group ahead of their own families. When he basically evades the question altogether, she doesn’t bother to press the issue, possibly out of fear of disappointing him again.

“Blessed Child” at times feels less like a movie and more like an extended therapy session—this is perfectly fine for the subject of the session, I suppose, but less so for others. There are moments of great emotional power here and there and those with a fascination with the Unification Church will want to check it out for those tantalizing bits of archival footage. For most people, however, it will feel more like a first draft for a film that could use more fleshing out in order to reach the full dramatic and emotional impact it's clearly striving for. 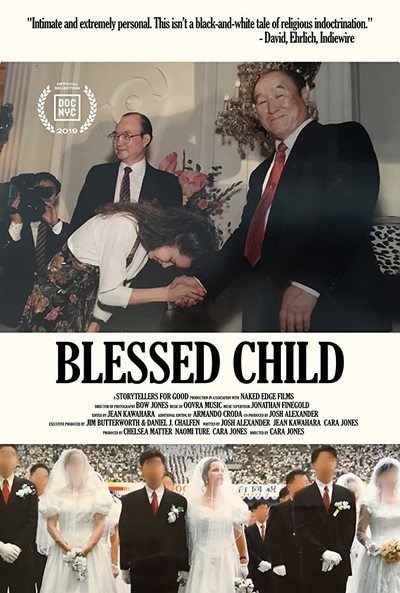