The very good cinematic news in a week when everyone could use a smile is that “Bill & Ted Face the Music” is essentially all it needed to be. It’s a long-awaited sequel that doesn’t betray its beloved characters, and it doesn’t merely repeat what people loved about them in the first place. Most of all, it is a remarkably likable comedy about two good guys still trying to find their place in the world that’s anchored by genuinely sweet beliefs about the importance of friendship, honesty, and, most of all, music. Be excellent to each other, dudes. It still matters.

Long past the point where they merely need to pass their history class, Bill (Alex Winter) and Ted (Keanu Reeves) are now parents to daughters named Thea (Samara Weaving) and Billie (Brigette Lundy-Paine). They’re still married to the princesses from the first film, played here by Erinn Hayes and Jayma Mays, but the relationships have gotten a bit rocky. Part of the reason is that when Bill & Ted are told they need to go to couples therapy, they think both couples need to be there at the same time—Bill does nothing without Ted, and vice versa. They can't even say "I" when they're in therapy, resorting to "We." Whatever one feels, so does the other one.

The problem is that their band Wyld Stallyns has yet to write the song that will bring the universe together. After years of fame that dissipated to such a degree that they have now been reduced to playing open mics, they’re still trying to write just the right tune, and failing over and over again. In a sense, “Face the Music” is about feeling like you didn’t live up to your destiny, like you failed a younger version of yourself who was set on changing the world.

It turns out that Bill & Ted have run out of time to do what they were told they had to do by Rufus—George Carlin is lovingly tributed here and then recast in a sense in the form of Rufus’ daughter Kelly, played by Kristen Schaal. After therapy, Bill & Ted are sped off to another reality by Kelly, where they meet The Great Leader (Holland Taylor), who tells them they have to write the song that ties all of the universe together or humanity will literally cease to exist. It’s already starting to happen as figures from the past are being zapped into the present day, ripping apart the fabric of time. “Tenet” isn’t the only time travel movie this week.

And so Bill & Ted decide to go to the future to steal the song from themselves, leading to some wonderful, funny sequences in which the guys meet versions of themselves in their possible futures. In most of them, they’re angry and alone, and Bill & Ted realize that they’re going to lose the princesses if they don’t fix their home lives too. Meanwhile, their daughters get the classic B&T roles of journeying back through time to meet important figures from history. They try to put together the dream band to back their dads to save the day, including Mozart, Jimi Hendrix, Louis Armstrong, and Kid Cudi, wonderfully playing himself. Eventually, Bill & Ted cross paths with Death (William Sadler) again and even encounter a hesitant killer robot named Dennis Caleb McCoy, played hysterically by Anthony Carrigan of “Barry” fame.

“Bill & Ted Face the Music” is fast-paced and funny. Winter falls into his old shoes a little better than Reeves, but Keanu’s genuine likability as an actor goes a long way with some of his best lines. There’s a refreshing lack of cynicism in these movies that honestly believe that friendship and creativity are going to tie us all together through history, something that feels like it registers with Winter and Reeves in their real lives too. These are compassionate actors and that comes through in the roles. This is not the kind of late sequel that's a cash grab. It's clearly a labor of love.

The “troubled marriages” subplot gets a bit too much screen time and doesn’t work as well as the best material in the film (and some early scenes feel a little clunky in terms of pacing), but it’s never anything that lasts too long. By the time Bill, Ted, their equally charming daughters, Death, an unforgettable robot, and Kid Cudi are in the final stages of trying to save the world, it’s a movie that almost dares you not to like it. It’s goofy in all the right ways and even serves as a reminder that it’s never too late to face the music, but only if we do it together. 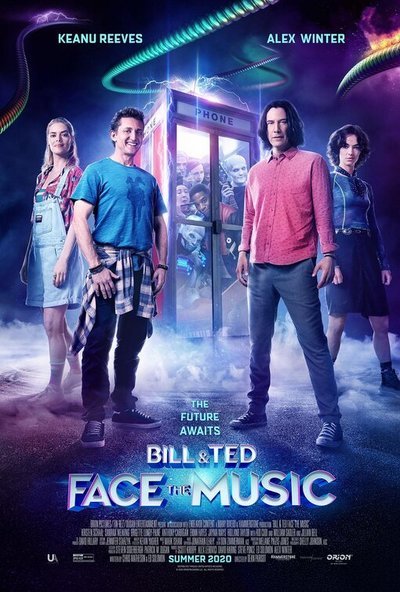 Holland Taylor as The Great Leader