“Bikram: Yogi, Guru, Predator” is the harrowing, uneven mix of two popular types of documentary—true-crime docs about salacious abuses of power, and testimony docs, which exist largely to give people a chance to speak out against their abusers. Director Eva Orner makes her story both about the predator and the victims, and delivers an appropriately cut-and-dry case that Bikram more than deserves that third title. But she connects these sensibilities with an approach that too often feels like an info dump, instead of a gripping mediation on the larger themes and harrowing stories that inspired it.

Los Angeles, 1998. Bikram Choudhury has helped start a health craze selling something that’s infinitely more real than him: the healing power of hot yoga, which he brought to the states after earning (or claiming) international acclaim. His yoga can help people heal their injuries, and with an approach that's like "Howard Stern meets Mother Teresa," he pushes them to a new physical potential.

The first act of "Bikram: Yogi, Guru, Predator" largely consists of different people professing about the healing effects of Bikram’s hot yoga classes, and the way their lives were changed. It becomes obvious that the miracles at work had them believe deeply in their teacher, as well. Meanwhile, Bikram is off-screen, only represented in photos, footage, and audio recordings from his class. And some of the students who talk about him are credited as “Former Yoga Teacher”—another reoccurring signpost for where the film is headed.

In a short time, Bikram amassed a massive following, gained celebrity clout, and even started some schools. He drove around in fancy cars, and constantly touted his greatness in TV interviews. His following was not a cult by definition, but it had strong whiffs of one, especially when learning about those who submit to eight grueling weeks of training, while following his lifestyle of barely eating and sleeping. He earned power, and then abused it: before sexual assault allegations came out about Bikram in 2005, he was already creating an environment where his way of yelling at his students, or touching them while in class, started to become a form of grooming. And when the allegations were out, there were plenty of members in the community who were ready to victim-blame or deny those who came forward, all for means of protecting their teacher.

In a way, Bikram symbolizes our constant, complicated need to find something that is bigger and us, and to belong to it. But the documentary falls short after that significance, as there's not really much to Bikram as a conversation topic beyond his genuine yoga skills and insidious application of them. A prosecuting attorney calls him “dumb as a post” as if it were scientific fact, and you can't argue with that especially when you hear about how Bikram acted while on trial. But once Orner reveals the many lies that Bikram has told about himself (as she does too late into the movie, the third act), he’s just another predatory con man who took advantage of Americans.

Orner's nonetheless tight editing presents "Bikram: Yogi, Guru, Predator" to have the emotional arc of one his students, in that you initially see the wonder of it—maybe you’ll get caught up in how they describe him as having an “amazing gift,” or the examples of people’s lives being enriched by Bikram yoga. And then, the heartbreaking, horrifying truth behind Bikram comes to the surface, like when one of the talking heads mentions his “flashes of megalomania,” and or the footage of him berating his mass of students, while an air conditioner pipes cold air over his pseudo throne. The big problem with this narrative approach is that we already know something is up—starting with that title—and the story can’t for a second posit that this speedo-wearing self-professed clown would ever be up to something good. Instead, the narrative's pay-off is more about the confirmation that, yes, Bikram is as narcissistic, misogynistic, cowardly, and anti-brilliant as you suspected.

This story is more effective when looking at it from the collective perspective of his followers. This narrative illuminates the often hard-to-express logic of putting oneself in close proximity with such a powerful predator, or even continuing to be in their world after such a traumatic event. Like the Michael Jackson victim documentary “Leaving Neverland,” or the Harvey Weinstein victim documentary “Untouchable,” Orner gives these women a place to speak about the horrible things Bikram did to them. The proof is in watching these people recount these horrific events in detail, and knowing in your gut that all of it is true; empathy is the evidence.

There's a side to "Bikram: Yogi, Guru, Predator" that wants to be a bit like other salacious Netflix documentaries, to entice viewers with a scandalous story of a larger-than-life grifter and how they amassed so much power. But that intent makes this doc even trickier—it doesn’t say much about abusive charlatans, their enablers, and their victims, that we don’t already know. 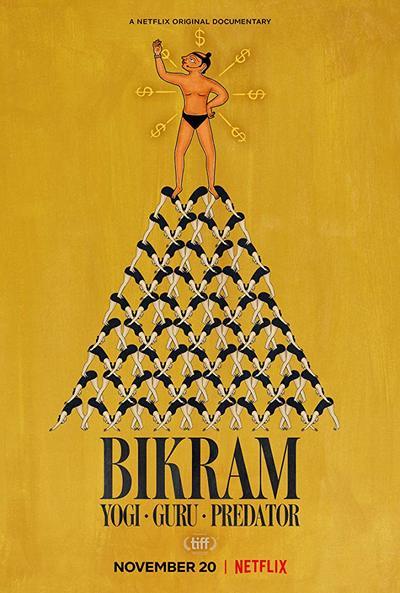