At first "Bigbug" seems like an odd title for a science fiction comedy with no big bugs in it. But in time, it makes sense. Or at least it makes sense in context of a science-fiction screwball comedy about artificial intelligence and authoritarianism and where they overlap. This movie by French fabulist Jean-Pierre Jeunet and his regular writing partner Guillaume Laurant ("The City of Lost Children," "Amelie," "A Very Long Engagement") is set in an upper-middle class suburban home sometime later in this century or early in the next one. Computers and robots run everything. The humans like it that way, until their technology turns on them.

The film's characters would be equally at home in a drawing room murder mystery or a bedroom farce where people are constantly sneaking into each other's rooms and slamming doors in each other's faces. Elsa Zylberstein is the homeowner, a recently separated woman with an adopted teenage daughter (Marysole Fertard). She has invited her new beau (Stéphane De Groodt) and his son (Helie Thonnat) for a visit at the same time that her husband (Youssef Hajdi) and his secretary/lover (Claire Chust) are stopping by en route to to a tropical vacation.

There's a "shadow" cast in the form of robots and artificially intelligent beings. Multiple generations of tech are represented onscreen. The daughter has a small, comparatively simplistic toy robot that used to be her childhood playmate; it's shiny and white and has a round head and rounded limbs. There's one with grippy tires and retractable-expandable arms and a neck—a domestic robot; we see it reaching for things, cleaning spills, and helping out in the kitchen. There's a robot with a brass spaghetti-wire face and stubby, insectile legs known as Einstein (voiced by André Dussollier) who coordinates the other older-generation robots. There's a humanoid domestic (Claude Perron) who's like a 1950s fantasy of a robot maid, and a physical trainer robot of the same generation (Alban Lenoir) who is, shall we say, providing more than calisthenic consultation to a neighbor (Isabelle Nanty). And there's an unseen AI that inhabitants address whenever they want to control video or audio displays, turn the heat or cold up or down, or open the doors to go outside or admit visitors.

That last thing proves important when the major characters (plus the neighbor) get trapped in the house and can't get the AI to open the exterior doors no matter what they do or say. This creates the kind of setup that the great Spanish director Luis Buñuel explored in two satires, "The Exterminating Angel" and "The Discreet Charm of the Bourgeoise." These pampered, complacent, upper-middle class people are trapped under the same roof while their tech is starting to malfunction (including the climate control system, which means they are literally in a "hothouse drama"). They're forced to confront each other and reopen old personal wounds at the same time that they're scheming to free themselves from what seems more like a house arrest with each passing minute.

The attentive viewer will have already deduced what the characters seem unwilling or unable to grasp: their imprisonment is related to technological developments occurring in the world at large. Early in the story, we get glimpses of a televised 'game show' in which humans are humiliated and hurt. The situations remind us of ways in which political prisoners, gladiators, and slaves have been mistreated throughout human history.

The tormentors are mass-produced, identical humanoid robots, all played by Jeunet veteran François Levantal. They appear to do the bidding of the AI hive-mind that rules at the highest level of robot tech. It's probably something akin to Skynet in the "Terminator" franchise, although this aspect, like everything else in the movie, is communicated in such a way that we get the gist of what we need to know without being drowned in exposition.

Jeunet is a filmmaker of what I like to call the "contraptionist" school, working in the vein of Robert Zemeckis, Terry Gilliam, Tim Burton, and animator Nick Park in the 1980s and '90s. He always blocks the actors elegantly in relation to each other and his precise, sometimes acrobatic camera movements. The characters' actions are choreographed to complement the movements of contraptions that swing into or out of the frame, rise up from the floor, zip down from the ceiling, and transform from their original shape into something else. There's even a futuristic Murphy bed made of shiny ribs of dark wood; it seems to shimmer out from a wall, dressing itself with blankets and pillows. Some of the gadgets could've appeared in "The Jetsons" or "Get Smart" or "Back to the Future, Part II," or in one those wonderful mid-century Jacques Tati farces like "Monsieur Hulot's Holiday" or "Playtime" where every frame was abuzz with devices that the characters thought of as miracles of modern science, but that looked to us like absurd toys—or vulgar displays of wealth.

There's something else going on here beyond virtuoso demonstrations of directing and production design. "Bigbug" is part of a tradition of science fiction movies that use robots and artificial intelligence to get us to think about what it means to be human. But the setup and follow-through is a little different here than in a lot of those movies, because the filmmakers suggest that the machines plotting to enslave or destroy us are just completing a coordinated, multi-generational campaign of self-willed obsolescence that humans dreamed up and implemented.

There's a secondary layer of paranoia that has to do with how technology can fortify authoritarian forms of government. The frightening, sadistic humanoid robots that loom over the people in this film may represent a Borg-like collective machine intelligence, but they talk like sneering, small-minded functionaries in a dictatorship, intimidating anybody who questions their authority and assigning legal penalties and exorbitant fines in the process. There are images of book-burning in this movie, and ritualized abuse of captives. We see extreme heat and cold deployed against prisoners, and group punishments that are meant to turn the other members of a group against the one that dared to speak out against injustice. (Between all that and the raunchy, farcical sex—hooray for the French!—this movie is most assuredly not for kids.)

"Bigbug" is debuting on Netflix because it's the kind of film that major theatrical distributors mostly won't represent anymore, and that probably couldn't be shown anywhere outside of the handful of cities with a thriving foreign film exhibition scene even if it did get made. The ending is a bit pat, verging on cutesy, and there are grating attempts to reassure us that things in this world are not irreversibly awful, even though everything we've seen in the previous two hours told us the opposite.

But it's likely that if "Bigbug" hadn't softened in its final moments, it might not have gotten funded at all. It's still a tougher, smarter film than American sci-fi cinema buffs are used to seeing. Its tone is tricky, and easy to misread. The humans in this film are angry and despairing not just because their freedom has been suddenly rescinded, but because they have figured out, too late, that they were living in a society in which freedom could be suddenly rescinded. As long as their refrigerator was full and their cooling systems worked and their packages arrived on time and they were able to open their front doors without permission, they never would have known. 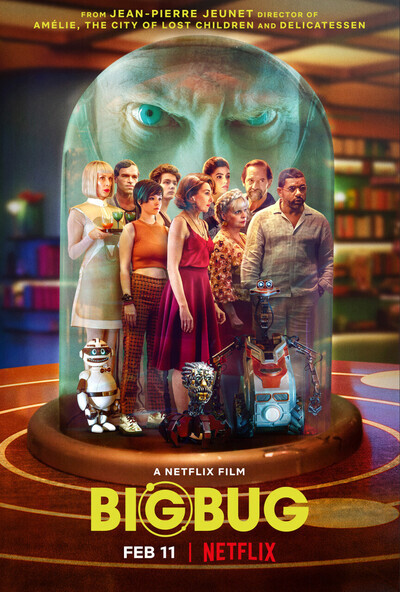