The Christmas-themed home-invasion movie "Better Watch Out" starts out as one kind of unpleasant, then switches gears to a higher level of unearned nastiness. This is the kind of lousy horror movie that hinges on a twist that comes about 30 minutes in: protagonists you thought were innocent are now implicated, leaving viewers with a completely different understanding of their prior behavior and their general nature. I won't tell you more about the twist because it is, realistically, the film's only novelty. But after it has played out, the film runs on the cheap fumes of "Betcha Didn't See That Coming" shock tactics. If you do, in fact, see it all coming, or if you simply do not enjoy having characters' malicious behavior rubbed in your face for a solid hour, you'll check out, unless you can convince yourself that stock horror movie characters become interesting simply by virtue of having been turned upside-down.

The movie follows two examples of horror archetypes, pubescent "nice guy" nerds and a "final girl" babysitter, as they are stalked and harassed by mysterious home invaders around Christmas-time. Horndog teens Luke (Levi Miller) and Garrett (Ed Oxenbould) contemplate losing their virginity behind closed bedroom doors. Luke wants to put the moves on five-years-older sitter Ashley (Olivia DeJonge), who gets left alone with Luke when his pushover dad (Patrick Warburton) and control freak mom (Virginia Madsen) head out to a party. Luke desperately tries to walk Ashley to second base by drinking his parents' booze and awkwardly putting his head on her shoulder. Thankfully, Ashley doesn't have to peel Luke off her leg for long: somebody has slipped into the house while nobody was paying attention. And they have a mask and a gun. Simple so far, right?

Well, buckle up, dear reader, because things are not what they seem! The zeal with which writer/director Chris Peckover and co-writer Zack Kahn turn the tables on viewers' understanding of this scenario is obnoxious unto itself. What's worse is the way that Peckover and Kahn demand that you stay invested in paper-thin characters as they proceed to terrorize each other and/or ineffectively strain against victimization. Every possible contrivance is thrown at viewers, from a booby-trapped backyard to a cell phone dropped in a fish tank. The baddies are always somehow faster and more agile than the good guys, and the victims are only interesting because of the mitigating circumstances that humanize them long enough to make you root for them. We're given no reason to care about these characters, beyond simple "Run away faster!" or "Beat him up!" impulses.

"Better Watch Out" is an infuriating sit because it requires you to invest in the programmatic bullying of a certain type of character, then cheer on that same stock type as he or she defies expectations and refuses to be pummeled into oblivion. It's the kind of movie that pushes your buttons at every turn, and casts actors based solely on their ability to play to your snap judgments of what they're "really" like off-screen. Peckover and Kahn run with those notions, then let you fill in the blanks of what their characters are actually like, drawing on decades of other genre films that sold you the same bill of goods: sexual repression bad, token female empowerment good. When the film ends, we've been traded one set of unchallenging cliches for another. 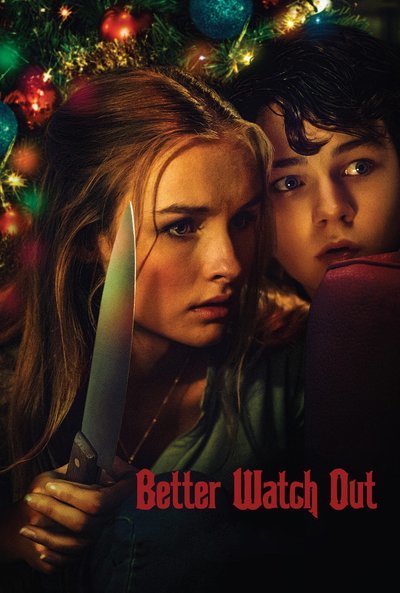