Playing both sides in any conflict is risky, even potentially soul-destroying, especially with a history crammed full of accumulated grievances and resentment. "Bethlehem" is a police procedural set in the West Bank city of the title, and it delves into the world of the Israeli secret service and their extensive use of Palestinian informants. It asks questions about loyalty and trust, and it also examines the fact that the most important thing for any human is to be able to live with himself, be able to look at his own reflection and be okay with what he sees. "Bethlehem" suggests that it is far too late for any of that. The Israelis need ears and eyes on the ground in the Bethlehem neighborhoods where militants are given safe haven, and the Palestinians are forced to cooperate, often to save their own skins. "Bethlehem" is strong when it focuses on the cop-informant relationship, its strange and intense intimacy, colored by the ulterior motives underneath and the competing loyalties of the respective communities. The film wanders a bit when it leaves that primary concern, and you can almost feel the film scattering its taut energy, but when it stays with the two leads, one Israeli, one Palestinian, it makes a compelling story.

First-time director Yuval Adler was a member of the Israeli army intelligence services, and he co-wrote the film with Muslim journalist Ali Waked, who specializes in reporting on the Palestinians. This gives the film its balanced outlook, with equal time given to both sides. But in some ways the balanced approach can't help but feeling like a cop-out, because you can sense the situation itself demanding that people choose a side, and fully, that this is not a world made for nuance and grey-areas. The fanaticism on both sides creates an unbreakable vice for anyone on the fence, for anyone hesitant to commit themselves one way or the other. People talk about the "cycles of violence" in such war-torn areas, and in "Bethlehem" we see that play out.

Sanfur (Shadi Mar'i), is a teenager who lives in Bethlehem and works as a bus boy. He lives in the shadow of his terrorist older brother Ibrahim (Hisham Suliman), a prominent member of the al-Aqsa Martyrs’ Brigades, but who may be two-timing them by working with Hamas. When the film opens, Ibrahim has gone into hiding in Bethlehem after claiming responsibility for a bombing in Jerusalem which killed 30 Israelis. Israeli agent Razi (Tsahi Halevi) recruited Sanfur when he was only 15 years old with the express purpose being to get information on Ibrahim. In the intelligence offices, Sanfur is referred to as an "asset", and that's what he is. But Razi, who spends more time with Sanfur than he does with his own children, has a fatherly attitude towards the boy. He counsels him to not hang out with losers, he provides him with cell phones, he looks out for him. The scenes between Razi and Sanfur are wonderful, with unexpected moments like Sanfur leaning against Razi and giving him a playful nudge, and Razi's sudden smile at some of Sanfur's more adolescent moments. But the feeling Razi has for the boy as a human being is not only irrelevant, but it clouds his judgment.

With Ibrahim on the run, yet releasing statements that play on the nightly news, the situation for Sanfur becomes unbearable. Forced to keep a huge secret from his own family, and from Ibrahim's dangerous associates, led by Badawi (Hitham Omari, in a terrific performance), Sanfur relies on Razi more and more for protection. At the same time, he starts to attempt to take Ibrahim's place, playing the Hamas representatives off of the al-Aqsa representatives. He keeps secrets from Razi; he keeps secrets from his father. He is in way over his head. Razi senses that, too. He has spent years cultivating the relationship with Sanfur. He can't just see him as a useful "asset". But his colleagues in the police force, his superior, are all concerned that he will do something unethical in order to protect his "asset". The walls start closing in on everyone.

The film moves back and forth between Bethlehem and Jerusalem, between the no-nonsense offices of the Israeli intelligence detail, and the temporary "offices" of the Palestinian militants, usually in unfinished homes and construction sites. The Palestinian Authority looms over the action in Bethlehem, driving gleaming SUVs, and laughing behind their hands at the well-meaning Europeans and Americans pouring money into their coffers. The Belgians are giving them money to promote the rights of Palestinian women. They laugh all the way to the bank. There is an internal war burgeoning between Hamas and the al-Aqsa Martyrs Brigade, both of whom see the PLO as giant cop-outs. The two factions literally fight over a corpse in a hospital, dragging the dead body back and forth, all while the news cameras press in for the best angle of the grotesque display.

Adler shows his stuff as a director in the scenes between Razi and Sanfur, their humor and uneasy subtext, as well as in all the scenes showing the ins and outs of police surveillance, its boredom and frustration, its dangers. "Bethlehem" shows us how these informants are courted and used, how they are thrown away when no longer useful. But Adler shows power as a director most notably in a fantastic action sequence where the Israeli agents chase Ibrahim through a market and then into the residence where Ibrahim has found shelter. As the Israelis search the home, an angry Palestinian mob grows in strength outside, throwing rocks at the panicked soldiers huddled by the van, all as the desperate Ibrahim engages in a doomed stand-off inside the house. It's a complicated sequence, but it maintains its visceral power throughout. The situation is palpably dangerous.

"Bethlehem" is interested in conflicting loyalties, the war between loyalty to self, loyalty to family, loyalty to community and history. Who speaks for the Palestinians? Different groups battle that out, shoving their way to the front of the pack to get their faces on the news. Sanfur is loyal to his family, but he also feels the need to be loyal to himself. He's just a kid. Perhaps Razi could take him to Israel, maybe he could live a life outside of the whole mess. Razi is loyal to his job, his family, and his own sense of mission. But looking at Sanfur, the adolescent kid who barely needs to shave yet, he feels a loyalty to something bigger. He also feels responsible for putting Sanfur in this untenable position in the first place.

The relationship between Razi and Sanfur is the glue that holds "Bethlehem" together. In that relationship, we sense the doomed hopes of reconciliation. The film suffers when it leaves that primary track, but there is still a lot here to admire and contemplate. 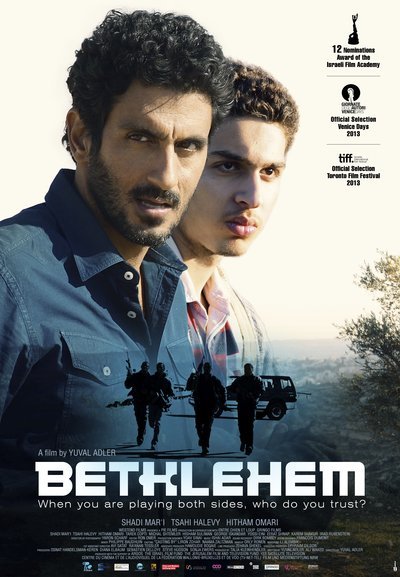