Written by cartoonist and playwright Jules Feiffer ("Little Murders," "Carnal Knowledge"), and based on characters he created for comic strips in Playboy and The Village Voice, "Bernard and Huey" is a lovingly detailed look at two unhappy and unpleasant men. Bernard (Jim Rash) is a 49-year-old book editor specializing in historical nonfiction and getting laid. He moved into his latest apartment five years ago but has yet to furnish it; he doesn't even have a table. One night his best friend from college, Huey (David Koechner of "Anchorman," among other films), shows up unannounced, looking for a place to stay. It's the first time they've seen each other in 25 years. Huey is running away from the collapse of his own family; he destroyed it himself for reasons that will soon become clearer.

Rash and Koechner inhabit their characters completely, and the film convinces you that the men have known each other for decades. Rash has the cloying voice of a stereotypical bookworm, and when he strips down to reveal a gym rat's body, the two characteristics tell you everything you need to know about him. Koechner expertly captures the boisterous/obnoxious demeanor of a chronically unfaithful man who's spent a lifetime mistaking himself for the rightful center of attention. Huey keeps needling others, spouting provocations, trying to see how many pointlessly abrasive statements he can get away with, a tedious ritual that spoils potentially pleasurable evenings and irritates Bernard. "Do you really believe this shit, or are you just talking?" a young woman asks Huey, rhetorically, after he launches into a monologue about how New York City is "tops in mean queers." "Why even speak?" Bernard says quietly.

Both men are miserable, self-centered people, though occasionally entertaining because their respective torrents of dialogue contain quotable one-liners. (Bernard, who prefers the company of much younger partners, and hastily corrects himself when he says "girl" instead of "woman," complains about the prospect of having to date anyone "old enough to be my wife.") Their misogyny runs deep. The movie keeps flashing back to the 1980s in which the twenty-something Huey (Jake O'Connor) tries to help Bernard (Jay Renshaw) get laid with help from his heavily annotated black book. "You know, we're living in the age of the urban chick," Huey tells Bernard. "They're hip, they know it all ... You take the urban chick on her own terms, man, you're dead." The men swapped lifestyles at a certain point. Now Huey has (or had) a family and a successful business. Bernard has a hyperactive sex life, a hamster-wheel job in publishing, and the ripped, swollen physique of a middle-aged man who's terrified of getting old.

As soon as Bernard and Huey become roommates, they lapse into their old patterns, then fight against them, and farcical complications ensue.  Bernard starts dating Huey's daughter Zelda (Mae Whitman), his estranged only child by his ex-wife Aggie (Bellamy Young, “Scandal”), while Huey takes up with Bernard's therapist girlfriend, Roz (Sasha Alexander, “Rizzoli & Isles”). Viewers who are familiar with Feiffer's relationship-and-social satire-driven comic strips, as well as "Carnal Knowledge," won't be surprised by the film's sour, at times corrosive edge. Like "Roger Dodger" and "In the Company of Men," two other notable dramas about American misogynists, this one is often dazzlingly assured—the performances are spot-on, and the production looks and sounds great. Mirvish and his cinematographer Todd Antonio Somodevilla shot "Bernard and Huey" on Super 16mm film in a wide format, an unusual choice for a talk-driven story, and they have a knack for starting and ending scenes with clever compositions that tease the eye by making you wonder what you're looking at.

Still, these compensations only get you so far. You may wonder why the film hasn't been updated a bit, to bring it into the 21st century, or at least into the late 20th. Self-hating, sexist losers like this still exist, but society has less patience for their foibles and less empathy for their destructive spirals of behavior, and the film seems only dimly aware of this. The way men like Bernard and Huey relate to the world has changed a lot since the last time Feiffer brought such men to the screen—if the entire tale were set in the '80s, or even the '90s, this wouldn't be an issue—and there are moments when the movie seems to strain to pretend that it's not based on a old property (especially when Zelda identifies Bernard as a man who's defined by books and rock 'n' roll).

Viewers will also be within their rights to ask whether there's any value in spending 90 minutes with a film that's the equivalent of Huey gassing on just to get a rise out of people. Granted, part of the joke is that these guys aren't worth the trouble they cause, and aren't nearly as interesting as they think they are, and Feiffer has had excellent luck detailing them in the comic strip format, a few panels at a time. But a feature film is another matter entirely, no matter how much evident intelligence everyone involved has brought to bear. 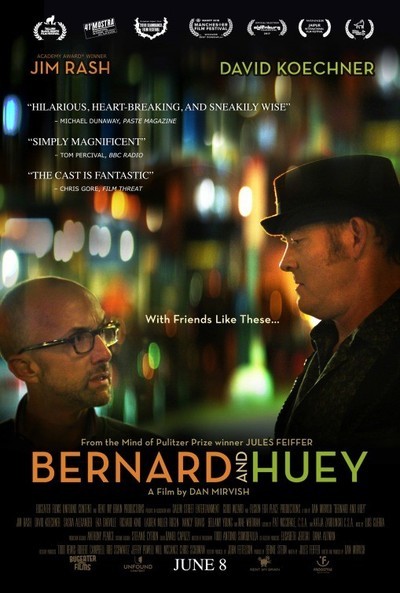