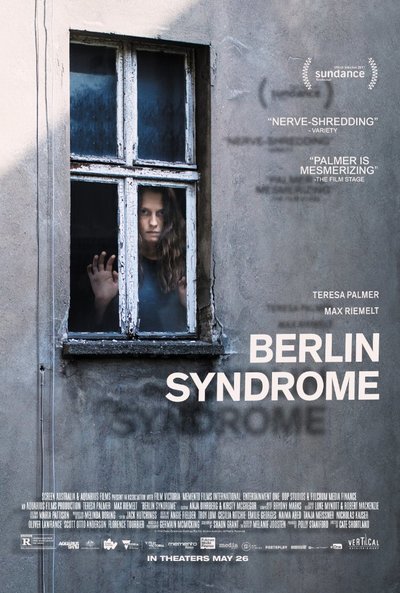 “Berlin Syndrome” will make you question any wanderlust-inspired notions you may have of traveling alone to a foreign country on a quest for self-discovery.

Australian director Cate Shortland creates a dreamlike sense of place within a nightmare scenario with this taut and strongly acted thriller. Working from a script by Shaun Grant, based on a novel of the same name by Melanie Joosten, Shortland has essentially crafted a claustrophobic two-hander with only occasional forays into the outside world.

The dynamic is constantly changing within the central romance gone wrong; the power shifts back and forth between hunter and prey, keeper and captive. And while Shortland takes her time perhaps too indulgently and would have benefited from tightening up the pacing—especially in the lengthy, languid midsection—“Berlin Syndrome” remains consistently compelling.

Much of that has to do with the presence of star Teresa Palmer, the Australian beauty believably de-glammed with dark, red hair and a palpable sense of vulnerability. Palmer plays Clare, a Brisbane photographer who’s visiting Berlin to shoot the city’s architecture. But she’s in a state of flux personally, which makes her easy pickings when she “accidentally” bumps into the charming and handsome Andi (Max Riemelt) on the street.

“Do you like strawberries? They make you forget your problems,” Andi asks Clare flirtatiously, offering her a piece of proverbial forbidden fruit from a basket he’s holding. With his adorable accent, playful sense of humor and just the right amount of facial scruff, he’s like a German Charlie Hunnam. And although he comes off as a sweet and trustworthy high school English teacher, subtle visual cues—and the way he eventually seduces her—suggest something sinister lurking beneath. She may not sense trouble, but we do.

As Andi and Clare spend a couple afternoons and evenings exploring Berlin, Shortland uses gauzy visuals and slow motion to capture the disorienting, intoxicating sensation of discovering a new place and a new person. But Clare doesn’t really know Andi—or anyone else in the city, or even the language, for that matter—when she finally goes home with him to his modest apartment. The unsettling, electronic score from Bryony Marks provides a tense undertone as he’s undressing and pleasuring her. What should be sexy and thrilling ends up being eerie and frightening.

And we’re just getting started.

Without giving away too much, let’s just say Andi isn’t all that keen on letting Clare leave the next morning. The realization that she’s trapped in this crappy place with this charismatic stranger sinks in over the next couple of days, and Palmer’s quietly tearful, jittery reaction is just chilling. So is Riemelt’s comparative calm—which makes him that much scarier as a villain. He goes about his regular schedule at school. He stops by the grocery store on the way home. Days turn to weeks turn to months.

But what’s fascinating about “Berlin Syndrome”—a title that’s a take-off on the concept of Stockholm syndrome—is the way the relationship evolves over that time. Much of what Andi does to Clare is incredibly hard to watch, and Shortland is matter-of-fact and up-close-and-personal in the way she depicts the pain he inflicts on her. (She also makes great use of this confined space.)

Eventually, though, a warped sense of domesticity emerges. He brings her little gifts. He bathes her and cuts her hair. He’s like a needy little boy seeking maternal approval. And the fact that your feelings toward Andi might change over the course of the film is a testament to the assured, nuanced performance Riemelt gives.

What Palmer does is an even trickier feat to pull off. She’s tasked with creating a character with an ever-changing mental state and doing it almost wordlessly. She’s also alone on camera a lot of the time in just a few rooms; there are no flashbacks to her youth in Australia to give us a sense of what shaped her or what matters to her. Palmer lets us know who this person is by the way she reacts in an extraordinary circumstance—the way she kills time by herself, and the way she thinks on the fly to survive once Andi returns.

It must have been a huge challenge both physically and psychologically, and it’s never short of riveting.

The Ebert Fellows on Sundance 2017