There are few things more critic-proof than a cute puppy. The opening moments of Brandon Camp’s “Benji” stand as irrefutable evidence of this principle, as a mother canine and her offspring are carted off by malevolent dog catchers. Out of the shadows, the face of a pint-sized pup emerges, cocking his head in confusion as he watches his family vanish into oblivion. If tears aren’t starting to form in your eyes by the time the title card materializes, then you are clearly not the target audience for this picture. Released today on Netflix, “Benji” stubbornly follows in the paw prints of the franchise it intends to reboot. It’s directed by the son of Joe Camp, whose initial 1974 vehicle for the four-legged star became a surprise hit, grossing $45 million on a $500,000 budget, while garnering an Oscar nomination for Euel and Betty E. Box’s catchy title tune, “I Feel Love.” The acting wasn’t polished and the script was nothing special, but there was still a charm about the movie that was unmistakably old-fashioned. When Frances Bavier (a.k.a. Aunt Bee on “The Andy Griffith Show”) made her final screen appearance in an amusing cameo, she seemed entirely at home in the quaint, small town setting created by Camp.

Yet the key highlights of the “Benji” pictures have always been the stretches of wordless storytelling in which the audience is invited to take a dog’s eye view of the world, where average-sized people become fearsome in stature. Camp was a master at utilizing the Kuleshov effect, juxtaposing close-ups of his furry protagonist with footage of memories supposedly running through his mind, thus causing us to read all sorts of meaning into his facial expressions. Of course, dogs can be as expressive as any human, and the ace animal trainers enlisted by Camp certainly had their work cut out for them over the years, as the heroic pooch found himself in increasingly traumatizing encounters with villains—both human and otherwise. It makes sense that Blumhouse Productions would be interested in financing the new “Benji” flick, since there are numerous sequences here that veer on the brink of horror. Camp never shied away from portraying the dangerous forces in society that have a penchant for preying on innocence, and though kids are made of tougher stuff than many adults would suspect, very young viewers will likely find some scenes in these pictures too much to bear. All I remember about my experience of watching 1987’s “Benji the Hunted” as a kindergartener is I bawled through the first half and couldn’t bring myself to finish the rest. The film was a full-on survival thriller, with Benji protecting four cougar kittens in the wilderness, and if I was only slightly older, I would’ve been enthralled by their adventure.

Brandon Camp’s “Benji” stays true to the formula of his father’s original picture, and that is a smart move as well as a limitation. On one hand, the scenes involving the titular hero are as deftly handled as ever. Rather than have his thoughts articulated by a celebrity voice or—god forbid—make his gums flap via CGI, the film allows the dog’s face to tell the story, thanks in large part to the assured editing by Carsten Kurpanek. When a lonely boy, Carter (Gabriel Bateman), first locks eyes with the mixed breed stray, there is a sense of a tangible connection being forged between the pair. He feeds the mutt strawberries just as Elliott tempted E.T. with Reese’s Pieces, and it’s not long before we get the obligatory Spielberg homage in which the kid’s beloved creature—whisked under the nose of an oblivious single mom (Kiele Sanchez)—is hidden amidst a pile of stuffed animals. There’s a sweet scene in which Carter and his sister, Frankie (Darby Camp of “Big Little Lies”), name their new companion after Benjamin Franklin. “You look like a Benji,” says Carter. “He’s old and new at the same time.” That sort of line used by a movie to self-consciously comment on itself would seem out of place in a film aiming for realism, but these pictures have always been fixed in the realm of fantasy. When the brother and sister are kidnapped (a twist regrettably recycled from the 1974 film), they are obviously frightened, but they never quite lose their cool. Carter instinctively leaves clues that he hopes will guide Benji to the rescue, while Frankie calmly prays to God, requesting that the plot culminate in a guaranteed happy ending. Of course, real kids would be much more scarred by this sudden entrapment, but the film enables its young human protagonists to be as resilient as its canine without devolving into tiresome “Home Alone”-style slapstick.

The only other feature directing credit for Brandon Camp was 2009’s would-be romance, “Love Happens,” a film that was cornball in all the wrong ways. I still chortle at my memories of the scene in which a self-help guru instructs his seminar guests to block two lanes of traffic while describing what they see (honking horns, middle fingers, etc.). He then takes them up to a hotel roof, where the participants are able to witness the beauty they were missing in life. Of course, things will always seem more pleasant when you aren’t blocking two lanes of traffic. “Benji” has its own share of silliness, but that comes with the territory. It’s the sort of film where grown men, bereft of irony, will say lines like, “That dog wasn’t following protocol—he was following his heart!” The world of Benji is the same one inhabited by Lassie, where the barking of dogs is meant to signal more than, “Feed me,” or, “Don’t leave me!”, or, “I really need to go out.” There’s something pleasing about the unapologetic sincerity with which these films are crafted, and though Brandon may rely a touch too heavily on music montages and dialogue-driven scenarios, he has clearly inherited his father’s skills for directing a crisply paced family-friendly tearjerker.

Children respond to films that don’t talk down to them, and the “Benji” pictures meet them at their level, treating their fears of the world with the seriousness they deserve, while empowering them with the hope that they will prevail. Throughout his career, Roger Ebert was an admirer of Benji, much to the chagrin of his television sparring partner, Gene Siskel. After being called on the carpet for recommending “Benji the Hunted” while giving a thumbs down to Kubrick’s “Full Metal Jacket,” Ebert explained that “reviews are relative.” While he noted that the dog picture wasn’t “one tenth” of the Kubrick one, it had to be analyzed within its own context, and when viewed on those terms, the film succeeded. I’ll be the first to admit that the best moments in the new “Benji” movie aren’t in the same league—or the same universe—as the first and most satisfying act of “Full Metal Jacket,” but that was never its intention. Even with the inclusion of modern cell phones, this 2018 release feels like it arrived fresh from 1974, and that is what makes it a delight. 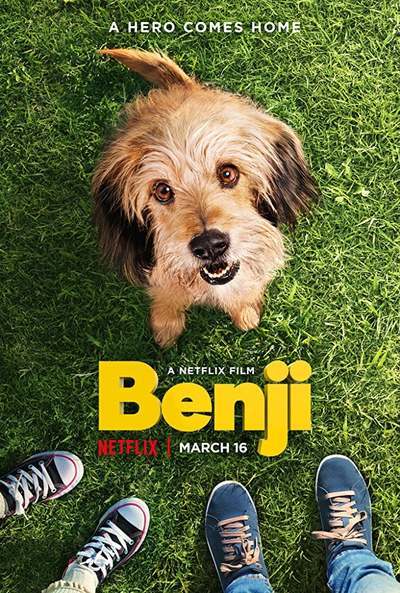