If nothing else, “Ben-Hur,” directed by Timur Bekmambetov from a script by Keith R. Clarke and John Ridley, is a masterpiece of condensation. The celebrated 1959 version of the saga, once the most-Oscar-winning-picture-of-all-time, clocked in at almost four hours. The silent version was about two hours and twenty minutes, no marathon but still longer than average for its time. This movie, on the other hand, gets the job done in pretty much exactly two hours.

The briskness was but one reason I found this quasi-Biblical epic strangely refreshing. This version of the strange novel concocted by Union Army General Lew Wallace in 1880 (a warrior’s apologia for Christianity that surpassed 1852’s previous record holder “Uncle Tom’s Cabin” on the best-seller lists) begins as Judah Ben-Hur (a steely Jack Huston) and his onetime friend Messala (Toby Kebbell) are facing off in a chariot race. Talk about beginning on a high note—the chariot race of the William Wyler-directed 1959 film, starring Charlton Heston and Stephen Boyd, is that movie’s climax. But fear not, the scene is just a preview, and we flashback, after a few expositional points in narration from Morgan Freeman (who, fear not, is also a character in the picture), to Judah Ben-Hur’s noble household in Jerusalem eight years before, and see Judah and his Roman adopted brother Messala (note the slight change in relations) riding horses together carefree, until an accident places Judah in the care of his friend. It’s a bit of a one-set-of-footsteps moment that has a big payoff later on.

Wallace’s novel was subtitled “A Tale of the Christ” and this movie was produced by Mark Burnett and Roma Downey, who’ve parlayed Burnett’s success with reality television into a shingle devoted to making movies with pronounced Christian content. Hence, this “Ben-Hur” has more Christ in it than any previous version. And a lot of philosophizing in the dialogue. “You confuse peace with freedom,” one character opines at a certain point; at another the ideal of a “civilized world; progress, prosperity, and stability” is proffered, which sounds like a setup for a takedown of secular humanism. When first seen, Jesus (Rodrigo Santoro) is carving wood, and overhearing a conversation between Judah and his later-to-be-converted wife Esther (Nazanin Boniadi), he gently pipes up, “Love your enemies.” “Love your enemies? That’s very progressive,” Judah responds. Soon, when he’s stripped of his home and family and enslaved on a galley ship, he will have the opportunity to turn those words over.

The characters all speak in a completely contemporary tone, which shows the influence of—what do you know?—Scorsese’s “The Last Temptation of Christ,” which was criticized for (among other things) having the Apostles talk like they’d just hopped off the IRT. This is not particularly bothersome, it turns out. In the net plus department, once the action really gets going, it’s quite good. The sea battle during which Judah makes his escape is a really effective bit of action moviemaking—one of those scenes that compels you to exhale when it’s finally over. It’s frantic and loud, but not particularly over-the-top, which is unusual for Bekmambetov. Also unusual is the relatively restrained violence—there’s a lot of brutal behavior in the picture but its depiction is relatively restrained, another first for its director, whose work in the likes of “Night Watch,” “Day Watch,” and the abysmal “Abraham Lincoln: Vampire Hunter” lacked a lot of worthwhile qualities, nuance being one of the bigger ones. I have to credit Burnett and Downey here; clearly they had a commitment to keeping the film as “family-friendly” as possible. The chariot race, too, is both wholly watchable—no bones are crunched, and plenty could have been—and coherent. Lead actors Huston and Kebbell both do very credible work, although in Judah Ben-Hur’s earliest incarnation Huston does look a bit like Jimmy Fallon doing Barry Gibb. And at certain of their bro-out moments Huston and Kebbell look like they’d just as likely walk off the set and go check out Sleaford Mods.

Does the movie radically re-arrange both its source material and that material’s most famous adaptation? It sure as hell does. But I doubt that many contemporary viewers consider either of those as holy writ. This is a “Ben-Hur” of and for its time, but also a little better than its time, it turns out. I’m not qualified to say whether it’s an effective delivery system for its Christian message, but I think I can credibly pronounce it a good popcorn movie. 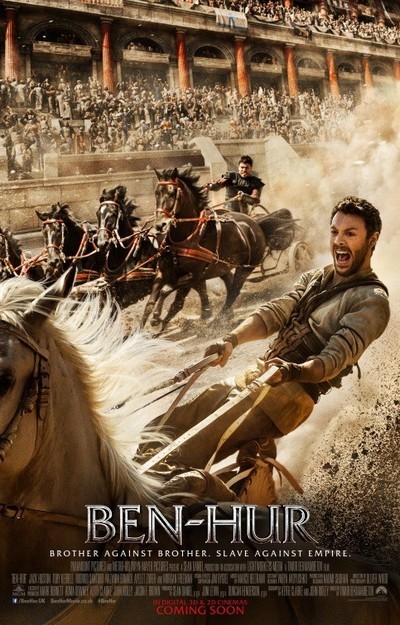 Rated PG-13 for sequences of violence and disturbing images,