The life of comedian John Belushi so perfectly conforms, at least in the broad outlines, to the parameters of the classic cautionary tale about stardom—an immensely talented young man emerges from obscurity to become rich and famous beyond his dreams, only to succumb to the temptations of stardom and die long before his time—that it seems a little strange that those attempting to recount it have failed to get it right. Bob Woodward’s controversial 1984 bestseller Wired: The Short Life and Fast Times of John Belushi was a work that was obsessed with wallowing in the excesses of the Hollywood drug culture that he saw Belushi as a representative of but demonstrated visually no interest in him as a person or as an artist. “Wired,” the 1989 film version of the book, was a surreally bizarre adaptation of the book that recounted Belushi life and death in such a strange manner that Belushi (played by a then-unknown Michael Chiklis in a performance that was good despite the circumstances) found himself sharing screen time with Bob Woodward (J.T. Walsh), who was conducting an investigation into his life, and—I kid you not—a Puerto Rican cab-driving guardian angel (Ray Sharkey) who takes Belushi on a guided tour of his life after he wakes up on the table in the morgue.

The good news about “Belushi,” which had its world premiere as the Opening Night selection of the Chicago International Film Festival and which will appear on Showtime next month, is that it's at least a step up from those earlier efforts—it keeps the wallowing to moderate levels and there is not a single guardian angel on display. However, it too seems to be curiously uninterested in what it was that made Belushi tick and what drove him to the darkest of depths when he literally seemed to have it all. Instead, writer/director R.J. Cutler (whose previous documentary subjects have included Oliver North, Dick Cheney and the creation of the annual mammoth fall-fashion issue of Vogue) is content to present a slickly produced compilation of photos, film clips and behind-the-scenes footage without bringing any new insight to the proceedings.

Tying all of this material together are recordings of interviews with Belushi’s family, friends, and colleagues which were used to put together “Belushi,” a 2005 oral biography by his widow, Judith Belushi Pisano, and Tanner Colby that was meant to serve as a literary corrective to “Wired.” Because these recordings were made so long ago, several of those participants, including Harold Ramis, Penny Marshall and Carrie Fisher (whose keen observations about Belushi are easily the most penetrating ones heard), have since passed on themselves, which inevitably leads to a bit of an additional pall whenever we hear them. The film also uses animation (with Bill Hader doing Belushi’s voice) to fill in key moments of Belushi’s life for which there was no archival representation—his first encounter with Judith, his first exposure to Second City, whose stage he would soon be dominating on a nightly basis, and, perhaps inevitably, his early encounters with cocaine.

The film hits upon the expected touchstones—his breakthrough on “Saturday Night Live,” the mammoth success of “Animal House” and “The Blues Brothers,” his increased struggles with drugs and an industry that only saw him as the broad slob comedian and that sad day when the seemingly indestructible force of nature finally slipped away all alone at the Chateau Marmont in Los Angeles. However, the movie prefers to go over ground that has been more than adequately covered in the past—at this point, there are probably many who could cite the histories of the early days of “SNL” and the making of “Animal House” chapter and verse—while barely touching on others. His attempts to stretch himself as a performer, for example, are barely touched on—his charming and restrained work in the sweet romantic comedy “Continental Divide” gets only a cursory mention even as the film gives us yet another chance to watch the old “SNL” parody commercial for chocolate donuts.

Maybe my vague antipathy towards “Belushi” stems from a still-intense admiration towards Belushi himself that began as small child staying up way past his bedtime to watch those early years of “SNL” and whose first R-rated movie in a theatre was “The Blues Brothers.” I can still vividly recall coming home from school that Friday afternoon in March of 1982, turning on the television and gradually hearing the news that would leave me crying more intensely than I would at the passing of some actual family members due to a combination of shock and a realization, even to a 10-year-old kid, of the massive sense of loss his death represented. In theory, a movie like “Belushi” should have brought back those feelings in a rush but while I found myself smiling at many of the old clips, the film, for the most part, left me curiously unmoved.

There is one moment in the film that does achieve a bit of real emotional power and that comes towards the end, where the scene outside the Chateau Marmont is scored to a recording of Belushi singing Randy Newman’s great confessional ballad “Guilty” during one of the Blues Brothers concert. Ignore the obviousness of the juxtaposition between the scene and the song, and just concentrate on Belushi’s performance—in just a couple of minutes, his rendition suggests his incredible ability to hold an audience spellbound with his raw talent, as well as a sense of understanding of the forces that drove him in a far more effective manner than the film surrounding it. Someday, there will be a take on the life and work of John Belushi that is as fascinating, complex, and entertaining as he was. “Belushi,” however, is not quite that film.

"Belushi" premiered as the opening night selection of the Chicago International Film Festival and this review was filed in conjunction with that premiere. It will air on Showtime in November. 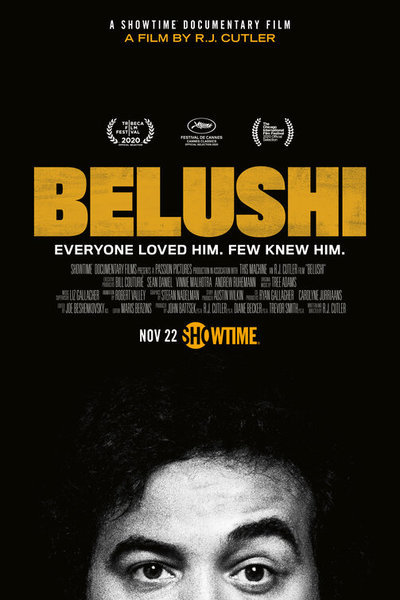 John Belushi as Self (archive footage)

Judith Belushi-Pisano as Self (archive footage)

Harold Ramis as Self (archive footage)

Dan Aykroyd as Self (archive footage)

Chevy Chase as Self (archive footage)

John Landis as Self (archive footage)

Penny Marshall as Self (archive footage)

Lorne Michaels as Self (archive footage)

Jim Belushi as Self (archive footage)

Ivan Reitman as Self (archive footage)