Mamoru Hosoda’s animated film “Belle,” a modern reimagining of “Beauty and the Beast,” sees an outcast by the name of Suzu (voiced by Kaho Nakamura), discovering community and love on a virtual reality platform called U. Through lush graphics, Hosoda’s fairytale charts the highs and lows of online stardom, and how we act out our innermost selves in the safety of an online world rather than at the behest of a crueler, realer universe. It’s a meticulously crafted, albeit not totally original critique of internet culture, bursting with color and melodramatic teen angst.

The reserved, lonely Suzu lives in an idyllic countryside, where the bus line, following this summer, will soon be discontinued. Apart from school, where few take notice of her, U is her outlet to the outside world. The brainy, cynical Hiro (voiced by Ikura) is her best friend, her only friend. When she was a child, Suzu’s mother died while trying to save a stranded girl from a raging river. As a result, the now 17-year-old struggles to sing in public and is distant from her father. Only on U, where she becomes the radiant Belle, the platform’s most popular star, can she find the strength to sing.

We soon discover how Suzu is playing a role. See, every avatar on this body-sharing app is created from each user’s unique biometric information. When Suzu created her profile she uploaded a group picture that included Ruka (voiced by Tina Tamashiro), the most popular and attractive girl at her school, making Belle in her image.

Hosoda, in the early going of “Belle,” includes “Beauty and the Beast” references in simple ways. Suzu’s online popularity rises until a bruised, caped creature named The Dragon, followed by a cadre of authorities known as the Justices, barrels through her U concert. The justices, a band of muscular bullies dressed like superheroes, want to unveil The Dragon’s true identity because of the way he fights, seemingly punching opponents in the U’s Martial Arts Hall out of rage rather than sport. Sensing an inner-hurt that’s fueling him, Suzu becomes enamored with Dragon, and puts herself in direct opposition to the Justices.

“Belle” wraps the classic myth in familiar tropes concerning teenagers navigating high school crushes: Suzu’s childhood friend, the handsome and popular Shinobu (voiced by Ryô Narita), for instance, is one such flame whose warmth always seems just out of reach (it doesn’t help that he nauseatingly sees himself as her protector when she doesn’t need one). Any commentary the film tries to give about online culture never rises above the common: The internet exists for some as a therapeutic repository for healing pain and loss, and a toxic landscape for gripes and bullies.

Rather the draw of “Belle” is its lush animation. At times, it’s cartoonish; in others, it’s hyper-realistic. At most points, the aesthetics morph into fantastical and whimsical shapes. Some images lodge in your brain like a rainbow on a puddle: The modern, virtual recreation of the Beast’s castle, a kind of crystal palace is one. Belle, adorned in a flowing rose-colored dress, singing atop a whale mounted with speakers as millions of avatars in all shapes and sizes surround her, represent another. The most sincere scene: A golden glittering sea of voices outstretched in pure kindness, featuring Suza’s best song, in a movie composed of an ocean of plaintive melodies.

The way Hosoda’s grandiose script retools “Beauty in the Beast” is equally transfixing. The basic building blocks, its visual odes to the fairy tale, certainly form a sturdy foundation. But Hosoda thoughtfully adds new, emotionally fertile soil to the vintage narrative. From it sprouts a difficult subject whereby the acute pain felt by the voiceless arises. Suzu must learn how her inner strength can also be her outer strength. And how her talent, apart from her spellbinding singing voice, resides in the empathy she shows, not in the popularity others give her.

Hosoda doesn’t offer a wholly new take on either the teenage romance format or online culture, and it's sometimes grating that Suzu must learn to embrace her sense of agency while making room for a love interest that equally believes in her fragility. But the captivating animation and the potent meditations on emotional and physical trauma give “Belle” an aching, gentle spirit worth experiencing. 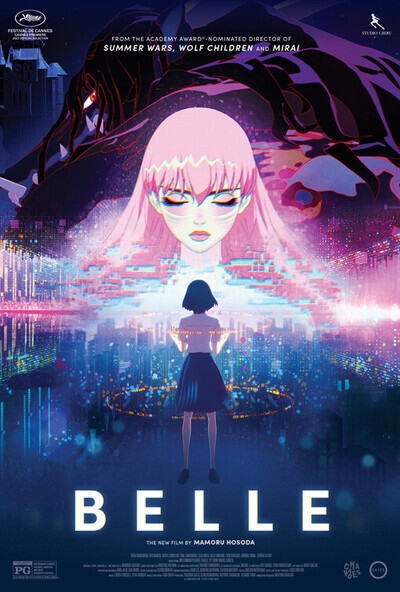 Takeru Satoh as The Beast (voice)