Translated literally, “belladonna” means “beautiful woman.” The word rolls off your tongue, implying something dangerous, seductive, delicious. So the fact that “belladonna” is also the alternate name of the deadly nightshade plant tells you a whole lot about historic attitudes toward beautiful women. The belladonna is a relative of the tomato; its berries and leaves are highly toxic. Long ago, it was used as a poison or a coating for arrow tips. It’s highly hallucinogenic. It causes delirium.

That mashup—of feminine beauty and insanity-inducing toxicity—is a good cipher for everything about “Belladonna of Sadness” (“Kanashimi no Balladonna”). Produced by Osamu Tezuka and directed by Eiichi Yamamoto (“Astro Boy,” “Kimba the White Lion”), the 1973 anime film played at the 23rd Berlinale, but it was a commercial failure, and its production company, Mushi, went bankrupt by the end of the year.

The film screened briefly in 2009, but now it's getting its first American theatrical release in a 4K digital restoration—which means its visuals are all the more vivid, accompanied by a very 1970s score by the avant-garde jazz composer Masahiko Satoh. Beginning with a pop ballad of love, “Belladonna” tells the story of Jeanne, a beautiful young woman who falls in love with hunky Jean. The two, blessed by God, marry, with all the requisite expectations of happily-ever-after. But soon the nightmare begins. On their wedding night, the lord of the village rapes Jeanne. Jean is helpless to intervene. At first broken by the experience, Jeanne eventually vows revenge, with the help of a pact with the devil, who appears to her in explicitly phallic form and grows larger the more Jeanne submits to him. As Jeanne grows more and more powerful, she poses a threat to both the village lord and its priest, who seems to always be beside him. Jean seems progressively more wimpy, succumbing to drink and excess. The men grow weaker as she grows stronger, until she becomes a powerful witch and must be taken down. But that becomes difficult, because the peasant villagers have become attached to her—she provides them healing and hosts nights of unimaginable pleasure in the forest. Violence is the only recompense.

The tale draws inspiration from a book called “Satanism and Witchcraft,” a history of witchcraft published in French by Jules Michelet in 1862. That explains one of the film’s stranger conceits, which is that Jeanne’s story is actually the tale of Jeanne d'Arc (Joan of Arc), the young woman who led the French army and was burned at the stake, but later beatified and canonized—all by the Roman Catholic Church. It also links her story to Marianne, the female personification of the French Republic, depicted by Eugene Delacroix in his 1830 painting “Liberty Leading the People” (which appears at the end of the film). Michelet’s book set up witchcraft in the Middle Ages as a secret religion, led by a woman and drawing on pagan sources, that sought to undermine the hybrid oppressive hierarchy of the feudal system and the Roman Catholic Church. Michelet’s story focuses favorably on the witches, and though it’s considered historically inaccurate today, it’s regarded as one of the first sympathetic histories of witchcraft, establishing the idea that witches heal with herbs and plants and also wield their sexuality as a weapon against the powerful.

The brew of rebellion against feudal and religious orders, decadence, and women’s sexuality is potent, persistently haunting storytellers’ imaginations, from “The Crucible” to “The Witch”; “American Horror Story” took it as its theme for a season; one might read “Black Swan” as a witch story as well. The tale usually follows the same arc: a young, beautiful, innocent woman’s sexuality is unlocked through some painful process. Often she struggles against this awakening of physical desire—but when she lets go and gives in, she gains power, especially over men. Her presence threatens the dominant order.

Twenty-first century stories of witches are often visceral and triumphant. Smashing the patriarchy and experiencing sexual awakening isn't subversive the way Michelet's book was, anymore. It's portrayed as a positive thing, even if in many stories the oppressors (often parents) die a violent death—in stark contrast to the gnarled image of an ugly witch. “Belladonna of Sadness” was released in a pivotal time for its own story: in 1970, the women's liberation movement in Japan had begun as women marched through the streets of Tokyo, and in January 1973, the U.S. Supreme Court ruled on Roe v. Wade. Two decades earlier, “The Crucible” had reframed the Salem Witch Trials as an allegory for McCarthyism, and “Belladonna of Sadness” (especially with its explicit links to Jeanne d'Arc and Marianne) suggests the story of Jeanne, the witch, as a metaphor for women's sexual liberation and, ultimately, the liberation of all people.

That's all very high-minded, but “Belladonna” is still a tough watch, partly because it seems so bent on shocking every viewer that each gorgeous image is followed by something terrifying (or sometimes, juvenile—never has the devil been less scary than in the form of a penis with a face). Its rape scenes intend to convey the feeling of rape to the viewer. Near the beginning, it's genuinely moving, but somewhere around the middle, the film's sheer excess and occasional silliness gets exhausting. But as a piece set into the history of films about witches, it's interesting; we've been obsessed with the idea of the seductive, toxic witch who beckons deliciously for a long time, and that shows no signs of fading away. 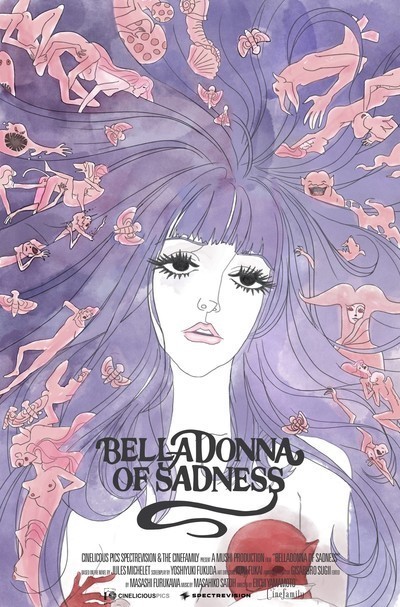 Tatsuya Nakadai as The Devil

Masaya Takahashi as The Lord

Shigako Shimegi as The Lord's Mistress

Natsuka Yashiro as The Witch

Masakane Yonekura as The Priest