Spirituality defies the structure mankind so often craves. It can spring from any experience that taps into the primal desire within each of us to reach beyond our worldly constraints and grasp at the eternal. The most profound instances of spiritual connection I felt during my churchgoing years were not with the excerpts of scripture preached from the pulpit, but with the fellow members of my congregation. All we had to do was make eye contact with each other to affirm that we were sharing in an odyssey of the soul that transcended all the usual barriers erected between us outside the church walls. The ideal Mass transforms a group of strangers into a united human family, and the same is true of any art form. During the handful of shows I have seen performed by the Lyric Opera of Chicago, I’ve found myself tempted to avoid reading the translations projected above the cavernous stage, opting instead to let the emotions conveyed through the singers’ majestic vocals speak for themselves. Among the most memorable productions recently staged at the Civic Opera House was the 2015 world premiere of “Bel Canto,” a rapturous adaptation of the 2001 Ann Patchett novel, which was itself inspired by a real-life hostage crisis that took place in Lima, Peru, during the mid-‘90s.

Now the book has been turned into a movie by Paul Weitz, a director whose work has always been defined by a certain earnestness, whether tackling adolescent sexual frustration (“American Pie”) or self-imposed isolation (“About a Boy”). He may seem like an odd choice for “Bel Canto” until one considers how music has played a crucial role in his career, never moreso than on his exuberant Amazon series, “Mozart in the Jungle.” Humor can be mined from the tensest of scenarios under his direction, with reservoirs of pathos reverberating beneath every laugh. His 2015 Lily Tomlin vehicle, “Grandma,” is often uproariously funny, yet what lingers most potently in my mind is the final scene, where the camera holds on the titular heroine’s face as she laughs wistfully to herself, recalling unspoken memories of her late love.

This sequence alone suggests that Weitz is a natural fit for Patchett’s characters, many of whom have entire conversations without uttering a word. Julianne Moore is adept at this very skill, and her face proves to be an invaluable instrument throughout the film. As Roxanne Cross, the famed American soprano thrust among the hostages in a mansion overtaken by armed guerrillas, Moore sings with a voice dubbed by the incomparable Renée Fleming, who served as a creative consultant on the opera. This could’ve registered as a fatal distraction, yet the actress synchronizes her body with every inspired bit of phrasing and intake of breath, replicating Fleming’s nuances just as she nailed the inflections of Sarah Palin’s speech in “Game Change.” The illusion is all the more impressive when viewed in close-up, fusing the full-throated fervor of two modern masters.

Moore and Ken Watanabe, cast as the Japanese businessman who harbors an infatuation for Roxanne, may be top-billed, but the story is truly an ensemble piece. Though the opera makes no secret that Lima is the mansion’s location, the book left it unspecified, and the film is equally allegorical in its portrayal of oppressed rebels railing against their country’s military dictatorship. Tenoch Huerta, so frightening as the tattooed gang leader in “Sin Nombre,” emerges as the heart of the piece, bringing fierce conviction to his role as Benjamin, a general leading the band of captors. With a government that has left his people impoverished and his loved ones incarcerated, Benjamin feels he has no choice but to keep the international group of wealthy detainees hostage until his ransom is delivered. At first, he demands that they be exchanged for the president himself, who was the initial target of the rebels but failed to show up on the night of the raid, choosing instead to watch his favorite telenovela at home.

Benjamin revises his orders, declaring that the ordeal will end only when all political prisoners are freed, despite the compromise offered by a Red Cross emissary (Sebastian Koch, riveting). Shaken by the media’s increasing disinterest in his agenda, he nevertheless refuses to surrender, noting, “My people have a long history of giving things up.” Aside from the accidental murder of Roxanne’s accompanist committed by a jittery gunman, the days spent by these hostages within the opulent confines of their cage amount to little more than a prolonged inconvenience designed to raise awareness of the suffering endured by Benjamin’s fellow citizens. Moving the accompanist’s death from the end of Act One (in the opera) up to the film’s 25-minute mark lends a sense of impending doom to every scene in the hour that follows, when casual exchanges threaten to derail into senseless violence.

What makes every iteration of “Bel Canto,” including this one, such a richly rewarding journey is the gradual evolution of its characters, who begin to form a makeshift family as the outside world grows more distant with every passing hour. “You remind me of my son when he was sixteen,” calmly replies a French ambassador (Christopher Lambert) to the testy kid holding a gun to his head. There are echoes of “Lost Horizon” in the almost Utopian serenity that leads the hostages and rebels to cavort through the courtyard like children playing an impromptu game of football. Easing the tension is Roxanne’s awe-inspiring voice, which has an enlightening power accentuated by the harmonized melodies in David Majzlin’s score. Neither she nor Katsumi Hosokawa (Watanabe) would’ve ended up at this house had it not been for her voice, utilized as bait by government leaders to persuade the businessman to invest in their country. Roxanne had no intention of connecting with anyone at the party prior to her capture, but once Katsumi’s kindness causes her to let her guard down, she admits to the greed that resulted in her agreeing to this invitation. Weitz begins to layer in a gentle sprinkling of humor and warmth without ever crossing the line into escapist fantasy.

Subtitles are used when needed, but never during the tender encounters between Roxanne and Katsumi, whose communication gap is bridged by a translator, Gen (Ryo Kase, Watanabe’s co-star in “Letters from Iwo Jima”), though their eyes tell us everything we need to know. Alas, the scant running time—clocking in just over 90 minutes—doesn’t allow for the epic emotional scope of the opera. Watanabe is especially underutilized, with too many of his interactions with Moore merely glimpsed in montages. Following the tradition of Rodgers and Hammerstein classics, this budding romance is juxtaposed with a secondary plot thread about young lovers—Gen and the operatically named rebel, Carmen (María Mercedes Coroy)—and their scenes generate more palpable heat. You can tell how good their lovemaking was by the way Carmen bites into an apple. The magic of the opera’s most unforgettable sequence, simultaneously staging both couples’ affairs in rooms that discreetly roll out from either side of the stage, is lost when translated to mere crosscutting on film.

These reservations aside, I was still amazed at how involved I had become in the characters’ plight by the time their story had reached its tragic conclusion. So thoroughly has the director immersed us in their feelings for one another that even the house starts to resemble a cozy place to live. Once again demonstrating that he knows how to stick a landing, Weitz leaves his most indelible fingerprint on the material by setting his wrenching climactic sequence to Vladimir Martynov’s “The Beatitudes,” a spellbinding composition that is nothing less than the musical equivalent of a flower in mid-bloom. Though this track from the Kronos Quartet had already been tinged with heartache when heard over the end credits of Paolo Sorrentino’s “The Great Beauty,” here Martynov’s music equals the bracing despair of “Nearer My God to Thee” when performed by the violinists aboard the sinking Titanic. Benjamin helplessly surveys the inevitable carnage as if it were water seeping into his ship. Those who survive find themselves in an ironic predicament, since their “rescue” seems more like an entrance into a greater prison, where its inhabitants are routinely shielded from understanding the humanity of others. All we’re left with, in the end, is a prayer wrapped in a song haunted by unspoken memories. I was reminded of the astonishing young opera singer, Laura Bretan, who performs “Pie Jesu” in order to commune with her late grandfather. What is music if not language at its most spiritual? 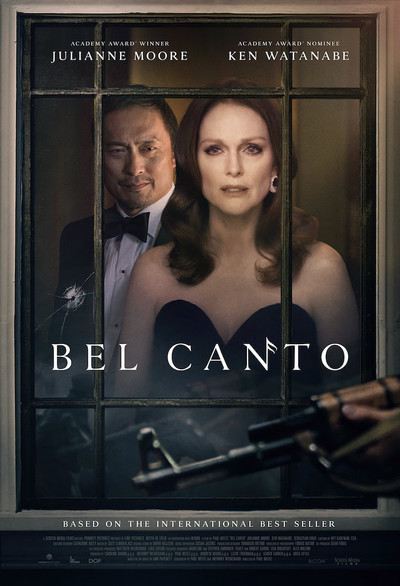