God demanded unfaltering faith from Abraham when he asked him to murder his own child. Abraham's willingness to carry out the heinous deed without hesitation spoke of a divine loyalty, and today might be interpreted as blind fanaticism. Told in meticulously arranged static frames, director Dea Kulumbegashvili’s blistering debut “Beginning” opens with a service in which a Jehovah's Witness pastor, David (Rati Oneli), explains that exact passage just before hateful attackers desecrate their temple.

Settled not too far from Tbilisi, the capital of the Caucasus nation of Georgia, the rural congregation is no stranger to intolerant onslaught from neighbors of other creeds. But the latest incident has heavily fazed former actress Yana (Ia Sukhitashvili), who is now David’s wife and the one in charge of preparing children for their baptism. Her later exchanges with those young devotees, her own son included, are about sins, heaven, and hell; further evidence of how ingrained religion is in their isolated existence.

Plagued with bitter apprehension from enduring her husband’s rigidness, Yana is tired of having her voiced muffled in every way. Sukhitashvili’s fiercely contained portrayal connotes an unnerving psychological state brewing under the surface, like a volcano on the verge of a destructive, yet quiet eruption. She’s lost all sense of personhood in the tight grasp of this domestic tyrant. The actress operates with despondency, her limited energy complementing the film's overall unhurried pace.

That torturous sentiment is only exasperated by encounters with a sadistic man claiming to be a police officer, for which a trigger warning is in order. Along the way, the plot positions Yana in situations that point to a new chapter but eventually sink her further in despair and worthlessness. In one of the movie’s most enrapturing moments, Yana lays peacefully on the grass with her eyes closed while the light of twilight glows on her, perhaps musing on what could have been or still could be. This is the only time a smile crosses her face. It’s a long, nearly still shot, one that captures a renewed hope that soon vanishes.

Within the movie’s boxy aspect ratio, cinematographer Arseni Khachaturan (who also lensed last year’s “Aviva”) uses gorgeous compositions of delicate balance to backdrop both the scant serenity and violence—a rocky river adorned with soft pink flowers being one of the most striking for its beauty and what it witnesses. Rigorous wide shots let the action unravel without interference of reactive editing. When the camera does move, even if it’s only a modest pan, it does so with major purpose, indicating a director and DP assured in their measured but potent imagery.

As David and Yana’s already chaotic marriage further deteriorates in the wake of a bombshell revelation from him and an inconceivable realization for her, Yana reaches a mental breaking point. The inconspicuously brilliant Sukhitashvili finally allows her character to crumble, but at the cost of cataclysmic repercussions. Kulumbegashvili’s study on manipulation shows Yana as a victim of a man who has forced her to abandon every ounce of herself, only to be rebuilt into a tool for the advancement of his career aspirations. In turn that vulnerability makes her the prey of others exploiting their family’s need for a façade of holiness.

It feels more than appropriate for Mexican director Carlos Reygadas to have signed on as executive producer. Not only is “Beginning” akin to the human darkness of his work, but he’s also been attacked by religious groups on the fringe for his most accomplished work, “Silent Light.” Precisely because of that kinship with the controversial auteur, it’s a bold move for Georgia to select “Beginning” as its Oscar entry for Best International Feature Film. If nothing else, the Academy Award race could promote Kulumbegashvili as a major discovery in a national cinema that has been on the rise as of late.

Like Abraham, Yana sees destruction as the sole path for atonement, to appease the man who thinks himself a deity in his own makeshift paradise that’s anything but. The filmmaker takes Yana’s inner battle between what is expected to believe and what she actually believes to shocking extremes. To its mild detriment, "Beginning" stays on a cerebral plane even at its most ravaging and emotionally intense. But in its muted havoc lies a potent intellectual laceration.

The World to Come 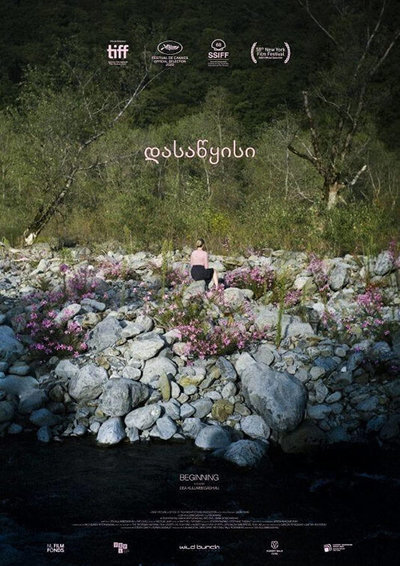