A shape-shifting, fluid film that is more a feat of dance and choreography than of cinematic storytelling, “Aviva” is a start-to-finish strange, surprising and often arresting artifact. And that’s thanks to writer/director Boaz Yakin’s (“Remember the Titans,” “Uptown Girls”) insistence on establishing an inventive visual dialogue with notions like coupledom, sex (the candid, unrestrictive and genuinely sexy kind) and gender, by formulating a freewheeling body language for love the way he sees and lives it. With a cast made up of dancers entirely, the resulting work feels like a bold, deeply personal, and psychological ode to the numerous facades of romantic relationships, both uplifting and gloomy.

In its finest moments, the dance-and-sex-infused “Aviva” is as liberating and seductive as the mental image of a bright silk scarf fluttering in the wind over a speeding convertible. In its most self-indulgent segments however—and there are plenty—Yakin’s experiment resembles something as taxing and dead-end as a traffic jam. At least the filmmaker knowingly owns this messiness and excess throughout, giving the viewer some license to get a little lost in the turbulent trenches of domestic commitment. After all, what love affair or established marriage that seems idyllic from afar isn’t at least a touch confusing and untidy when you lean into it from the inside? In that, Yakin gently starts on the outside of a long-distance romance, slowly works his way in and liberally defies chronological logic and even rules of gravity as his central couple eventually settles in a joint space in New York, roams the streets together and euphorically rolls around in shared bed sheets.

The romance of the Parisian Aviva and New Yorker Eden initially sparks online. Perhaps because they put their most intimate thoughts and feelings into written words first and open up their souls to each other in unconstrained, old-fashioned letters, the duo quickly falls in love when they finally meet in person. But wait … it’s more accurate to call the pair “a quartet,” as Yakin splits each character into their masculine and feminine halves—this decision, inspired by Luis Buñuel's “That Obscure Object of Desire,” becomes the film’s main feature. The redheaded Aviva is chiefly played by the boisterous Zina Zinchenko, with her male side portrayed by Or Schraiber in a rousingly physical performance. Meanwhile Eden is brought to life by Tyler Phillips, who nimbly underscores his character’s insecurity, with the film’s choreographer Bobbi Jene Smith playing Eden’s female offshoot—a sensual, muscular derivative, with a touch of impatience and frustration for not being fully cuddled by Eden.

For anyone who’s been in a long-term relationship before, this split—and the idea of not being alone in bed with your partner—will likely make a lot of sense. On this conceptual level, Yakin proves to be semi-successful in gendering the constant push-and-pull between Aviva and Eden. To the careful eye (and Yakin demands concentration), it will be telling to see whose alter egos participate in and own the film’s various threesomes, who the more confident and together party is in bed and elsewhere (hint: it’s Aviva) and what not being able to wholly embrace his more allegedly feminine instincts does to Eden. These harmonies, contrasts and growing conflicts are clearer at first when the duo goes apartment hunting, builds a presence as a couple (amid a company of other gifted dancers), discovers their bedroom rhythm and household cadence. But then the lines blur—the alternate personalities increasingly approach the foreground and even carry out their own scenes. The growing indistinctness, along with some admittedly wooden verbal exchanges between the actors who are way better at using and stretching their bodily muscles than dialogue delivery, sadly hinder the story’s emotional impact.

In other words, this is no acting showcase like “Marriage Story,” but it also doesn’t want to be. There is a different brazenness to “Aviva” that transports one to “Frances Ha” one moment, and the sumptuously staged “Natasha, Pierre & The Great Comet of 1812” the next. With playful costumes, a layered production design and a careful, adoring eye for the bare human body—empowering and sensual instead of predatory—Yakin manages to earn your attention and affection for “Aviva,” even when you feel a little pushed out by the movie from time to time. In the aftermath, what lingers in one’s mind is the film’s most enveloping qualities: airy interiors, dexterous tracking shots following the love-struck Aviva and Eden separately dancing in their respective cities and beautifully choreographed set-pieces in the subways, bars and wedding parties. It’s beguiling stuff. 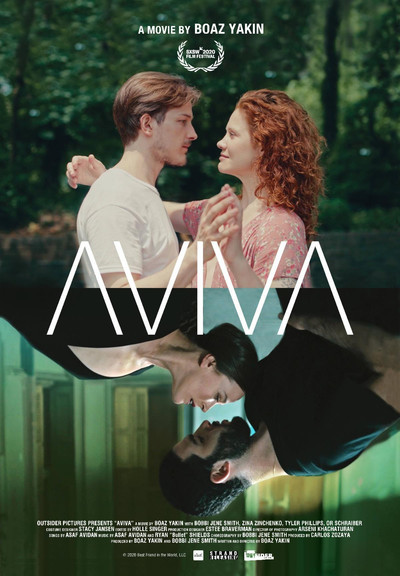