“Before the Flood” is a star-studded rally for an important cause, the need to save the world from apocalyptic climate change. Directed by Fisher Stevens and hosted by newly Oscar-annointed Leonardo DiCaprio who talks with the likes of Pope Francis and President Barack Obama, “Before the Flood” is another global warming warning sign, more honorable in its intentions than in having a distinct voice to ultimately make a difference.

DiCaprio never does indie films but he can turn documentaries into a type of event, as with 2007’s “The 11th Hour,” which he narrated, and now this film. Beginning its journey with when he was designated as UN Messenger of Peace in 2014, “Before the Flood” captures the different conversations he’s had with scientists, officials and locals who experience global warming first-hand. From Greenland to China to Kiribati, he is our surrogate into examples of climate change, and then the translator for ideas that are always shocking (the melting of the polar ice caps, America’s mass consumption of energy compared to other countries) but never entirely new. He functions most as a translator, asking broad questions to subjects, and punctuating different sequences with contemplative, emotionally empty shots.

With the star power that is here, it’s disappointing that the movie lacks such personality. The film does have the unique access to a DiCaprio that’s not on the set of a fictional project or in an awards ceremony tux, but he added nothing aside from his name and face. His underwhelming time on camera is matched by appearances from the likes of Secretary of State John Kerry, President Obama and Pope Francis, themselves offering brief, elementary advice to the audience.

Stevens treats the mission of appealing to global warming as a commercial, using quick cuts and fast graphics when displaying atrocities but never letting the horror of the natural destruction resonate. It’s apocalyptic entertainment with easy heroes (recycling, turning the lights off, telling your friend to do so) and villains (climate change deniers, FOX News), but with only talk of the emotional stakes.

While much of the movie becomes a wash of sentiments that range from “Oh, OK” or “Yeah, noted,” “Before the Flood” does have one marvelous scene that its contemporaries won’t have. Former astronaut Dr. Piers Sellers sits down with DiCaprio in a dark room that’s illuminated by a graphic of planet Earth, and talks about how his experience in space helped him understand the massiveness and beauty of the world. After getting a stage-four diagnosis of a sickness when he came back to Earth, he talks of how he was inspired to use that in-space big picture to create satellite images that put the big problems of the world into one image. You can see how different currents and rising temperatures will soon affect different parts of the world, leading to shortages of water and food, which will then lead to more conflicts of man vs. man. But, Dr. Sellers is an optimist—if we can all see our presence in the world in a much larger scale than what’s in front of us, we might be able to change our way of life before it is indeed too late.

After seeing the film, I still feel just as pessimistic about the state of the environment and my ability to change it. For cause-driven documentaries like this, connection is a crucial factor, more than information or slick aesthetics. As it touches upon so many basic ideas, “Before the Flood” only has the power to nudge its viewers, whether functioning as a reminder or a first-time around, regarding their carbon footprint. Stevens’ film lacks inspiration, either within the project or available for the viewer to take with them long after "Before the Flood" is over. 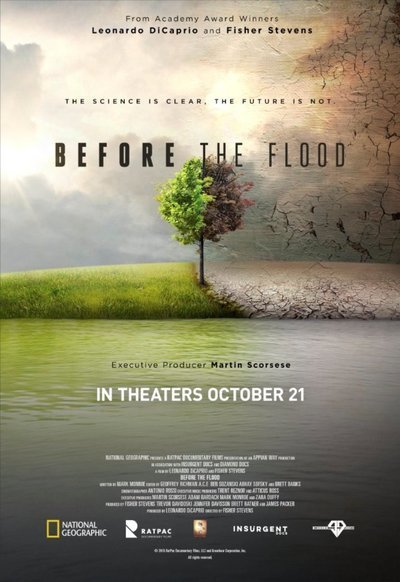 Leonardo DiCaprio as Himself

Barack Obama as Himself