Rebeca Huntt's "Beba" is the coming-of-age story that Black American children have been waiting for, a documentary that encompasses every step of reclamation of an American bloodline.

The opening shot lets the audience know that they are going to be in the head of Rebeca Huntt and it is a whirlwind. The chronology of her perspective is highlighted throughout the documentary in titles like “The Curse,” “Mind Control,” and “The Zombie Apocalypse.” As we watch her play with her hands, we feel that we are about to experience intense magic. The grainy film choice adds to the mysticism of the film.

The documentary follows Huntt, both subject and filmmaker, who is an Afro-Latina with Dominican and Venezuelan ancestry. Huntt is culturally and ethnically diverse, which makes her story relatable to a global audience.

We watch Huntt actualize the lived experiences of her schizophrenic grandmother, her father that escaped ethnic cleansing, and her sister who was neglected. She states their truth but does not pity their existence; she allows their humanity to shine through. Through exposure of truth and Huntt’s use of creative freedom, she opens doors for future Black and Brown creators to not fear telling their stories. Huntt feels like her parents sacrificed a great deal for she and her siblings to have to “grow up poor.” “This cannot be our legacy,” Huntt states as she takes on the responsibility of uncovering her past to move more intentionally in her future.

There are a few agonizing scenes of awful singing of “Cocaine Blues” and white liberal actors, acting so well, you feel like you are attending an Ivy Luncheon. They shed light on the cyclical conversations they've had with white people, which is another aspect of coming of age, as a Black or Brown person in America. At first, it almost seems like Huntt gives these ideas too much time, but I appreciated her dismissing of their beliefs.

The vulnerability expressed as Huntt faces her pain is a revelation to the audience. Once pain is faced, how much control does it have? Although Huntt was facing pain from family, friends, and the societal standards of America, she did not fold. It's moving and heroic to see her look at her pain and push through it.

As an audience member, I felt the new age way of life take over my body: “Black women deserve ease.” Huntt is healing through a beautifully produced film, and she/we DESERVE THIS (space, time, and resource). Breaking generational cycles seems trendy, but it is hard work. Huntt’s grand direction makes the process seem possible. While this is a work to reveal the illusion of meta narratives, it’s also an outpouring of love and truth, one that documents a movement with a keen eye.

Rebeca, Bebeca, Bebe, Beba is a sight to witness and a portal to collective growth. 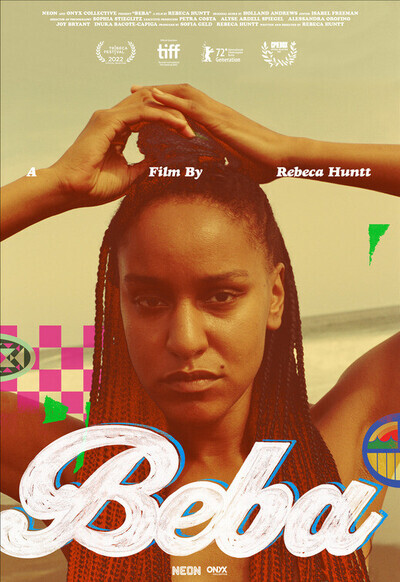 Rebeca Huntt as Self