A dear friend once compared grief to an abyss that we all fall into at one point or another. He said it's all the same abyss. We stay in it until we either decide to climb out or die in there. Most people do climb out, fortunately. But it's difficult—especially when the loss is catastrophic and sudden. It's even harder when you're a kid who doesn't fully understand what death is.

Adults don't fully understand it, either. Even when you have theology, philosophy, poetry, and art helping you out, and even if you've been through it numerous times and know others who've gone through it, there's still a black spot at the center of your mental image—a part of the canvas that can never be filled in, only acknowledged. That's what you have to make peace with.

And that's the focus of "Beautiful Something Left Behind." Directed by Katrine Philp, who undertook this project partly to understand her own feelings about losing her father, the movie is set in and near Good Grief, a facility in suburban New Jersey that serves children who lost a parent, or both parents, all of a sudden, and are struggling to process their emotions.

How to even describe the movie without collapsing and never finishing this review?

I needed this. I think you might need it, too.

There is no narration. No talking heads telling you what the facility exactly is, when it was founded, who runs it. Most of the main characters are children under 10. The movie takes its time introducing them. You learn a little bit about one of them, spend some quality time with them and their guardians (could be a mother, an uncle, a grandparent, anyone up to the job) while the other kids are supporting players, and at a certain point one of those other kids becomes the focus. But it's always democratic, a continuum  arranged so that we intuit, without needing any narrative handholding, that this is all the same experience, that only the details change, that somehow, it's us up there on the screen. It's us.

The kids understand more than you think and yet they also don't understand anything, really. Again: it's us. It's you.

The mundane always coexists with the tragic, the twisted, the awful, but the juxtaposition hits home here because of the way the camera parks on young kids talking about their grieving experience—profundity mingling with innocence and sometimes with mundane, even unintentionally funny/naive wordings.

A little girl in a grief circle says she's still sad about losing a parent, then follows this up by complaining that her sister got a cell phone and she doesn't have one yet. A little boy named Nolan, 9, sits with his sister Nora, 10, and talks about losing their father, and refers to "when he died and we had that party," meaning the memorial. Then their mother makes dinner for them, discussing the possibility of getting a pet, maybe a hamster or a lemur.

"Did you know the earth moves slowly?" a boy says. "That's why we don't jiggle."

Peter, 10, lost his father and mother. His father, he says, "tooken the bad medicine"—those last two words are never explained by the film—and then his mother died in a car accident—also never detailed for us, even though Peter and his uncle C.J. often visit the site of the wreck where mourners have placed a small marker, including a wooden crucifix.

"That's where the tree was," Peter says, pointing to an empty spot on the grass.

It's Christmas during one of their visits.

"I love you, Mommy, and I wish you haven't died," the boy tells his mother, speaking to the memorial. "Merry Christmas."

The child scoots a few paces to the left.

There's one little boy in this film whose face is so contorted by the pain of his loss that I could hardly bear to look at it. But I looked anyway, because I needed to see it. We all need to see it.

This is the black spot on the canvas, the void. This is what suffering is, on the faces of others.

We don't talk about death in this country—in a lot of countries. Not if we can help it. It's still considered impolite. It makes people uncomfortable. And so many of the rituals surrounding the non-discussion feel mechanical, obligatory. The well-wishes come across like boilerplate, cut-and-paste nonsense, even when we repeat them with sincere feeling. "I'm sorry for your loss." "She's in a better place." "At least he didn't suffer." Nora and Nolan read from the memorial book, taking turns. All well-meaning word salad. How can you capture the magnitude of such a horrible event in a way that will illuminate it for a child?

"We only got these because," Nolan begins the sentence, and Nora finishes it: " ... because they felt bad for us."

A child says that adults are constantly checking in on him in his room, asking if he's okay. "I say 'I'm fine.' What would they say if I said no?"

As filmed by director of photography Adam Morris Philp, and edited by Signe Rebekka Kaufmann, the movie has a bit of a Terrence Malick feeling—by which I mean that it has a knack for finding metaphors and symbols in everyday activities and images, and it presents these in a manner that suggests there's a world beyond the one that we can process with our brains and our senses, while stopping short of hanging labels or explanations on the film's moments of lyricism.

Whether that "world beyond" is heaven, an alternate dimension, another timeline, a void, or something yet-to-be-described is immaterial. We all feel it, that mysterious something, even when we deny its existence, and that's why we have elaborate belief systems articulated through religious texts and philosophical tomes and "Elegy Written in a Country Churchyard":

Here rests his head upon the lap of Earth

A youth to Fortune and to Fame unknown.

Fair Science frown'd not on his humble birth,

And Melancholy mark'd him for her own.

You feel this, you feel it, as you watch this movie. It's all here.

Loss, death, the void: that quiet absent presence dwells between the cuts, beyond the frame line. The unresolved mystery; the unresolvedness, period: the question with no answer.

There are no answers in this movie. It's just showing us something real and saying, "Here, look. Think about this. Feel it." In looking and listening, in watching, really watching, this movie, you feel that tingle of energy, that cool electricity, Freud's uncanny; the trigger in us all that that says, "Pay attention—there's something else out there. There's something else to all of this."

And so you see a low-angled shot of leafy boughs, the sun peeking through. And helium balloons and lantern balloons rising up to the sky. What's beyond the clouds? Space. Or heaven. A gust of wind whips leaves around the grounds of Good Grief while Peter and C.J. release balloons in honor of Peter's father and mother. The wind seems to follow these two. Wind repeatedly snuffs a flame out as C.J. tries to light a candle at the roadside memorial. ("That was probably mommy blowing it out," C.J. tells the boy, "because it's her candle.")

You believe there are larger forces at work, things we'll have scientific equations for in another hundred thousand years but that we're not evolved enough to grasp right now: presences, energies; perhaps not intervening directly in human affairs, though that's not beyond the realm of the possible; but surely, at the least, commenting on this earthbound life, upon our sadness and our struggles; speaking to the souls who are down here still, we beautiful somethings left behind. 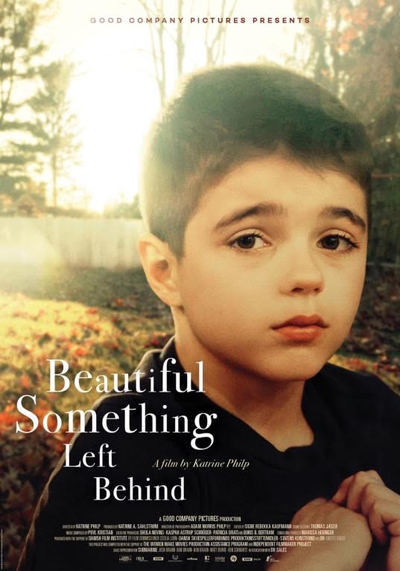 Beautiful Something Left Behind (2021)