Around and around the young woman goes, spinning in her green dress until she suddenly finds that she cannot stop. The carefree giggles that had rippled from her lips, harkening back to the innocence of her childhood, are replaced with labored breathing, as her frolicking movement gradually proves to be a desperate compulsion. As long as she can keep the surrounding world out of focus, she will be able to sustain the denial that keeps her hope alive. This is one of countless moments seared into my memory from “Beanpole,” the astonishing sophomore feature effort of 28-year-old Russian director Kantemir Balagov, who utilizes color as artfully as any painter one can name. Creating new life—a theme represented throughout the picture by shades of green—is what the sterile woman, Masha (Vasilisa Perelygina), desires above all else. In Leningrad, a city freshly ravaged by the siege of World War II, everyone is struggling to regain their balance, resulting in a pervasive clumsiness deliberately evoked by the film’s title. Masha’s initial attempts at achieving happiness are irrational, ungainly and, in some cases, quite cruel, yet never less than understandable in their wounded humanity.

Inspired by the oral histories of Soviet war veterans compiled by Nobel Prize-winner Svetlana Alexievich in her 1985 book, The Unwomanly Face of War, Balagov strove to portray the criminally underrepresented experiences of female soldiers grappling with post-traumatic stress disorder. Not only is “Beanpole” one of the first essential cinematic works released in theaters this year, it is also among the most involving character studies in recent memory, bringing us so deeply into the psyches of its heroines that we find ourselves trembling along with them every time they are shaken to the core. Well before the first shot appears onscreen, we hear a soft, high-pitched tone, the definitive motif of “Loveless” composer Evgueni Galperine’s score, that is eerily evocative of the music cue signaling the presence of Heath Ledger’s Joker in “The Dark Knight.” Here, the sound deftly indicates the terrifying loss of control endured by Masha’s friend and fellow comrade, Iya (Viktoria Miroshnichenko, a dead ringer for “Euphoria” star Hunter Schafer), whose service as an anti-aircraft gunner left her with the disorder known as post-concussion syndrome. She will periodically freeze in place without warning, unable to move or speak until the episode has passed, a potent metaphor for the paralysis felt in numerous ways by veterans when they cannot function as they normally would.

For Iya, sex emerges as its own form of paralysis, requiring her to lie silent and still for the purposes of fertilization. Masha’s need for a child causes her to rely on blackmail—both emotional and otherwise—as her method for persuading Iya to sleep with Nikolay (Andrey Bykov), a doctor at the hospital where they work as nurses in the months following the war. Iya’s refusal to fulfill this request without her friend being present results in a galvanizing overhead shot of Masha pinned between the intercourse and a wall, where she’s violently rocked by the violation of each thrust. Along with his brilliant 24-year-old cinematographer, Kseniya Sereda, Balagov sports the confidence to tell his story chiefly through the faces of his characters as well as their placement in the frame, thereby making the dialogue of secondary importance. His use of long takes never calls attention to itself, while allowing his actors to engage in a subtly choreographed dance that tells us more about their relationship than words ever could. It’s crucial not to cut between emotional beats, since it is in those lingering pauses and unspoken shifts where the heart of the film lies.

Take for example the moment when Iya and Masha are reunited. Shame has caused Iya to cloak herself, along with her secrets, in the darkness of a room, until Masha lights a match, illuminating both of their faces. Then we cut to a mesmerizing five-minute take of the friends as they speak to one another chiefly with their eyes. Without Iya having to utter a line, the truth she’s been suppressing gradually becomes clear, prompting Masha to get up off the floor. Overcome with grief, Iya falls upon her friend’s shoulder, a tender move that inspires the pair to waltz back onto the ground, before Masha finally says aloud what they had been afraid to articulate. This scene is poetically mirrored by a later and considerably more harrowing encounter between the women, fraught with long-simmering tensions that surge to the surface, culminating in an angle that recalls an earlier sequence of such excruciating anguish, it haunts the audience as much as it does the characters. If green externalizes the potential for hope, then red is the color of trauma that threatens to trickle out of the women’s noses at any moment. Crimson hues are transferred between Iya and Masha throughout the picture, in everything from clothing and hair color to the intricate production design.

The timely question of how to bring new life into a chaotic world—a central preoccupation of Alfonso Cuarón’s masterworks “Children of Men” and “Roma,” not to mention this year’s shattering Oscar-nominated documentary “For Sama”—weighs heavily upon this narrative, manifesting itself in Pashka (Timofey Glazkov), the boy mothered by Iya. We first see him from a high angle designed to accentuate his fragility and diminutive height in a land still smarting from the debris of warfare. Fantasy is what serves as a vital source of amusement for patients at the hospital, who entertain Pashka by imitating various animals, though the laugher momentarily subsides when one of them notes that the boy may not recognize the barking of a dog, since all of those residing in the town have been eaten. Privileged to have kept her own canine companion alive is Lyubov (Kseniya Kutepova), the wealthy wife of a government official, who also happens to be the mother of Sasha (Igor Shirokov), a horny boy that Masha has skillfully wrapped around her finger. The monologue that Masha delivers to extinguish the condescension from Lyubov’s gaze, detailing her tumultuous past and how she managed to survive on the battlefront courtesy of her sexual wiles, contradicts the backstories she had shared with Nikolay, affirming that at least one of these yarns may have sprung from her imagination.

Neither Perelygina nor Miroshnichenko have acted in a film before, and their performances are as authentic and dizzyingly complex as any singled out this month by the Oscars. Their characters’ bond is, in itself, a fascinating study in contrasts, with red-headed Masha’s short stature juxtaposed next to Iya’s blonde hair and lanky height that earns her the nickname “beanpole.” Whereas Masha’s eyes are warm and calculating, Iya’s are wide and vulnerable, ever-paranoid of how she stands out in a crowd, making it all the more uncomfortable for her to discreetly carry out forbidden tasks assigned by Nikolay, who is too cowardly to complete them himself. Just as Jennifer Kent’s woefully under-appreciated second film, “The Nightingale,” took us to the depths of unspeakable pain before illustrating the healing power of human connection, the hard-won optimism of “Beanpole” is earned precisely because it refuses to dilute its depictions of abject despair, which include a death scene as excruciatingly protracted as the one in Hitchcock’s “Torn Curtain.” Oftentimes what we’re looking for is right in front of us, provided we can peer through the haze of our expectations. I imagine even Billy Wilder would’ve gotten misty-eyed during the final, perfectly-pitched moments of this extraordinary film, as its remaining heroines realize they have little need for the impotent men in their lives and decide, in essence, to shut up and deal. 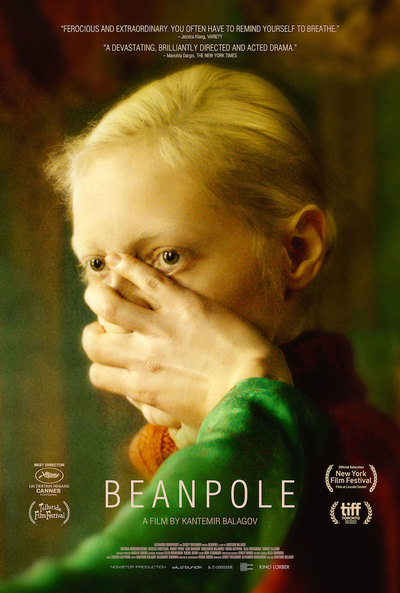