It’s commonly thanks to individuals with insatiable journalistic instincts that the history of families, cities or entire nations gets preserved through visual and written evidence. In the shattering “For Sama”—the most harrowingly intimate and arguably, the best documentary to date on the Syrian conflict—rebel Waad al-Kateab is one such woman born with that restless impulse to document. When she first starts to aimlessly film her country’s ongoing conflict that steadily grows in violence and complexity, al-Kateab is an optimistic, 26-year-old student armed with nothing but a cell phone at Aleppo University, studying to earn a business degree in 2012. This was when her country’s movement was riding the glory of the Arab Spring, with rising protests against the dictatorship of Bashar al-Assad. But as hope gave way to chaos, destruction and crimes against humanity committed by the regime and its allies, options started to thin out; revolution seemed like a distant fantasy. And yet, instead of leaving like many, al-Kateab decided to stay behind and fight for the better future she believed in.

Co-directed by al-Kateab and Emmy-winning filmmaker Edward Watts, “For Sama” is a devastating scrapbook and a confessional journal of sorts. It’s also a personal cinematic endeavor as opposed to a historical crash course in the vein of “Cries From Syria,” another superb documentary on the subject, but one with different ambitions. Al-Kateab ultimately assembles her film for her baby daughter Sama to explain to her why they stayed behind. There is of course a “what if” fear baked into her pursuit to capture everything. This way, she’d at least have something to leave for her daughter in case she or her husband Hamza, a medic and a fellow freedom fighter al-Kateab meets and falls in love with at the top of their five-year journey, are abruptly killed one day.

The couple’s chosen path, pieced together in thoughtful flashbacks and accompanied by al-Kateab’s exhausted, broken voiceover, has it all—from happy moments like their disarmingly rosy wedding set against the backdrop of a crumbling city and birth of their children, to countless near-death experiences (many of them, close to impossible to watch without tears.) Al-Kateab’s footage is so you-are-there, so crushingly rich in detail that you only forget you’re watching someone else’s horror when random people break the fourth wall. In one unforgettable scene, a mother who’s recently lost her child screams at the camera, wondering why she is being filmed in a moment of such unspeakable tragedy. al-Kateab doesn’t quite respond, at least not in the footage we see. She just knows these are the events that will help tell a story one day. To her daughter and to anyone willing to listen.

Contained in that story are two young brothers bringing their third’s lifeless body to Hamza’s makeshift hospital, in tears and utmost terror. Also included are randomly bombed streets, normalized air strikes, routine mass funerals and burials, devastated communities and healthcare volunteers scrambling to make the smallest bit of difference. In what could be the film’s centerpiece—in fact, what could be the whole year’s centerpiece as 2019’s most urgently humanist piece of filmmaking—a stillborn baby comes back to life in caring and praying hands that refuse to give up. It’s simply a breathtaking experience to see a team’s shared resolve pay off in real time. A self-taught yet astonishing filmmaker, al-Kateab and her directing partner Watts braid together such everyday tragedies and miracles with all their harsh bareness, and hold on to positivity wherever they see it.

Also seized generously here is a familial perspective we don’t see often in such documentaries. Witnessed largely from the POV of women who still try to preserve some sort of normalcy for their children, “For Sama” follows segments of domestic life struggling to exist in homes under the constant threat of deadly blasts. Still, children play with their coloring sets while their moms try to scrape together a meal with heartbreakingly limited resources. Waad and Hamza stand their ground for an additional year after the birth of Sama. But eventually, a country where even hospitals are targeted by the regime that aims to break people’s will, is no place to raise a child.

Eventually, the family does manage to escape Aleppo—al-Kateab is now employed by Channel 4 News in London and mothers a second child with Hamza. But her relentless footage is still there as a selfless act of bravery, bottled for when Sama is ready to watch. In the meantime, it is up to the world to take in every piece of “For Sama,” and truly grasp the human cost of the crisis. 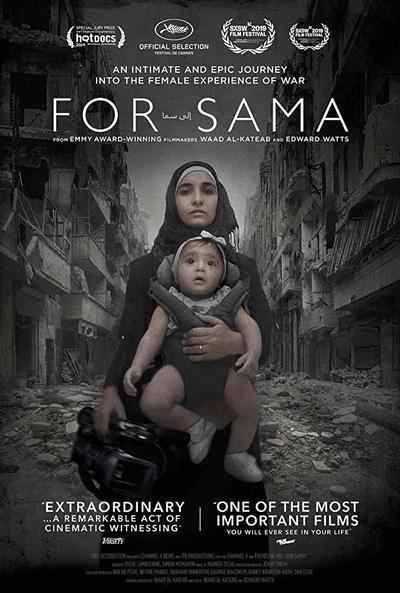