The dark comedy "Bad Therapy," about a married couple that becomes prey for a disturbed and manipulative therapist, contains so many promising elements that it's a shame that it never figures out how to mold them into a satisfying shape.

Directed by William Teitler, and adapted by Nancy Doyne from her same-titled novel, this all-star indie film is a mishmash of genres that never finds any meaningful through-line in terms of tone, theme, world view, or, well, anything. A scene of genial, low-stakes martial discord of the sort you'd expect to see on a mediocre Netflix series will be followed by a scene of broad comic hijinks, then by a scene of sexual menace, then more hijinks, then a scene of sudden, shocking violence, then back again to mediocre Netflix married-people-problems, and so on.

Alicia Silverstone stars as Susan Howard, a real estate agent with a daughter from a previous marriage, the precocious Louise (Anna Pniowsky). She shares a cute Los Angeles bungalow with her husband, Nature Channel producer Bob Howard (Rob Corddry). When Susan's best friend Roxy (Aisha Tyler) reveals that she's pregnant with triplets, it unleashes a flood of anxiety over unresolved tensions with Bob, and the two agree to enter marriage counseling with the same therapist who treated Roxy and her husband.

Unfortunately, the therapist, Judy Small (Michaela Watkins), is an unhinged manipulator who unscrews the tops of the Howards' skulls and roots around in their subconscious minds, looking for buttons to smash. Judy persuades Susan and Bob to start seeing her individually, never as a couple. She fills their imagination with doubts, lies, and cues that set off their self-destructive tendencies as well as their inclinations to distrust their mate.

Why is Judy such bad news? She has her reasons. But the film takes its sweet time getting around to exploring them. And once they're revealed, the character becomes less intriguing than when she was a mysterious chaos agent, because plausible psychology is not something this film is terribly interested in—nor should it be; lots of movies make no sense that way, yet still manage to thrill, amuse, and surprise. But this is not one of them. "Bad Therapy" is just realistic enough in its handling of the characters to make the scenes of psychological and sexual manipulation and violence feel contrived, superficial, and shoehorned in, lacking power to disturb, or even divert.

The cast is so appealing and talented that they'll make you temporarily forget that the film isn't good. Corddry doesn't have the magnetism to sell scenes where we're expected to believe that Bob is catnip to gorgeous women; but he plays distressed vulnerability well, and he's an attentive and intelligent counterpart for Silverstone, whose free-form vocalizations invest even the most tedious expository lines with an element of surprise. Watkins gives more to Judy than the film does; the script tips its hand early by having the therapist go full cuckoo, to the point where it's hard to accept that two reasonably intelligent, functioning adults would continue to see her for long.

The backup cast is likewise overqualified for the material they've been given. Sarah Shahi makes a searing comic impression as Annabelle, a coworker who has the hots for Bob and hard-sells him on the appeal of divorce—she's more entertaining walking away from Bob with her back to the camera, tiny in the frame, than most actresses are in closeup—but she's barely in the movie after that. David Paymer, a performer so assured that he can sketch a character's whole personality in a couple of shots of the guy walking down a street, has one long, tense scene that sets his character up as a force to be reckoned with, whereupon the film throws him away for no good reason. John Ross Bowie, Haley Joel Osment, Flula Borg, and other strong supporting players are likewise wasted, though at least they manage to light up the screen for the one or two minutes they were allotted.

"Bad Therapy" may remind 1980s and '90s cinema fans of a certain subgenre of thriller (represented by films like "Fatal Attraction," "The Hand that Rocks the Cradle," "Unlawful Entry," and Martin Scorsese's "Cape Fear" remake) wherein an outwardly happy bourgeois couple was terrorized by a stalker figure who represented their repressed desires or unaddressed neuroses. But it's not as lean and focused as the best of those movies, and the frequent injections of loopy character comedy (which worked like gangbusters in "What About Bob?" and "Captain Ron," essentially lighthearted cousins of those suburban stalker thrillers) dissolves any tension that the story can generate.

Even at the peak of his powers, a master filmmaker like Robert Altman ("The Player," "Nashville") might have struggled to unify such disparate elements. There are no Altmans at work here. Considering that this movie's title is close to that of one of Altman's worst, "Beyond Therapy," that's odd. You'd think the producers would've managed to secure the services of at least one wannabe.

The movie seems to have no idea why it's doing anything from one scene to the next. Imagine staying rooted to one spot while somebody pelts you with random objects drawn from a box, not knowing whether you'll get hit next with a marshmallow, a sweatsock, or a chunk of gravel. 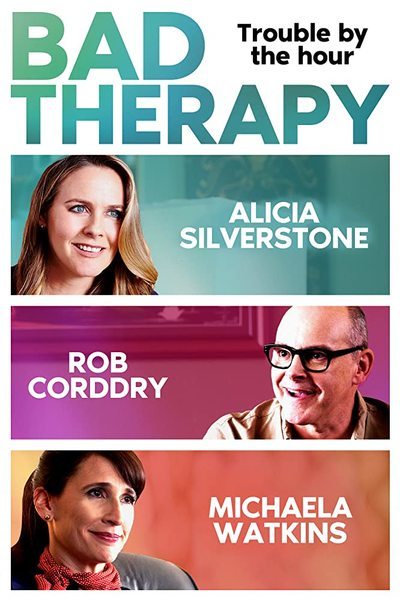 Hannah Rose May as Sandy