Pushy parents basking in the reflected glory of driving their kids toward extreme excellence is not exactly a new phenomenon. Long before the college admissions scandal that brought down corporate executives and Hollywood stars alike, the pursuit of academic superiority—real or imagined—has inspired perfectly sensible people to go to insane lengths. The right neighborhood with the right schools, a packed schedule of the right kinds of activities and athletics—it’s all to achieve the greater goal of sending their children to the right Ivy League university which will prepare them for the right lucrative career.

The top administrators at the Roslyn, New York, school district seemed not only to understand this instinct but also to exploit it for their own personal gain. “Bad Education” explores their real-life embezzlement scheme, which came crashing down when the high-school newspaper broke the story in 2004. Spending nearly $8 million on a sky bridge to beautify a campus seems reasonable when you’re trying to exude an aura of success—when you’re the fourth-ranked district in the country, gunning for that No. 1 spot. With that much money flying around, skimming a little here and there for a bagel or jewelry or renovations on your beach house in the Hamptons is no biggie.

Director Cory Finley finds the dark humor within this scandal, which he depicts with wit, style and a terrific cast. Hugh Jackman does some of the best work of his long and varied career as the superintendent, Dr. Frank Tassone, whose charisma and polished image disguised a multitude of secrets. Jackman plays on his usual charm and looks to great effect. But there’s something sinister within the slickness that’s unsettling from the first time we see him, spritzing cologne and trimming nose hairs in the mirror of the boys’ bathroom in extreme close-up. Frank clearly cares deeply and works hard to recall names and personal details of students and parents alike throughout the district; we can still see glimmers of the calling that drew him to this challenging profession in the first place. Fundamentally, he’s a pleaser and he wants to be liked—yet increasingly, he savors the fame and power that come with being in a position of authority in an affluent community. And as Frank and his second-in-command (played brilliantly by a brash Allison Janney) find themselves squirming to survive when their $11.2 million scheme comes to light, their flaws and follies become even more glaringly evident.

Finley’s follow-up to “Thoroughbreds,” one of my favorite films of 2018, doesn’t seek to dazzle with sleek, showy camerawork like that film did. But it’s similarly interested in mining the depths of out darkest impulses, and doing so with sharp satire. (Mike Makowsky, who was a middle school student in Roslyn when the embezzlement scandal broke, wrote the script.) “Bad Education” also calls to mind the great Alexander Payne film “Election,” with its students who are smarter and savvier than you’d expect and teachers who aren’t as mature and responsible as you’d hope. Finley actually could have used a bit more of Payne’s sharp bite in tackling this material. Geraldine Viswanathan radiates a quiet but increasingly assertive confidence as the high school reporter whose tough questions and thorough document searches reveal the district’s financial irregularities. Just as compelling as what she finds is her internal debate over how to handle that information. She knows what’s the right thing to do—but what if that’s the wrong move for her future?

That’s the dilemma that also plagues the school board members—led by a vividly haggard Ray Romano—when they first learn of the administrators’ indiscretions. Going public would not only jeopardize the standing of the school district nationwide, it also would damage its reputation locally, which would make it harder for high-school seniors to gain acceptance at top universities, which would cause property values to plummet.

For a long time, Jackman keeps us guessing as to the amount of Frank’s knowledge and the depth of his involvement. Janney’s Pam Gluckin chats casually about flagrant misuse of her district credit card over the buzz of the blender as she mixes margaritas. (And the film’s costume and production design find just the right amount of Long Island tacky and flashy without diving over the top into parody.) Frank, on the other hand, contains myriad, fascinating multitudes. As Jackman gets older, he seems less interested in getting us to like him and more inclined to play complicated characters who make questionable decisions. Wildly violent as his Wolverine may be in the “X-Men” universe—particularly in the excellent, standalone “Logan”—he’s still essentially a hero. “Bad Education” gives him the chance to play someone who may be doing some truly bad things, and you can tell he’s really sinking his claws into the role this time. 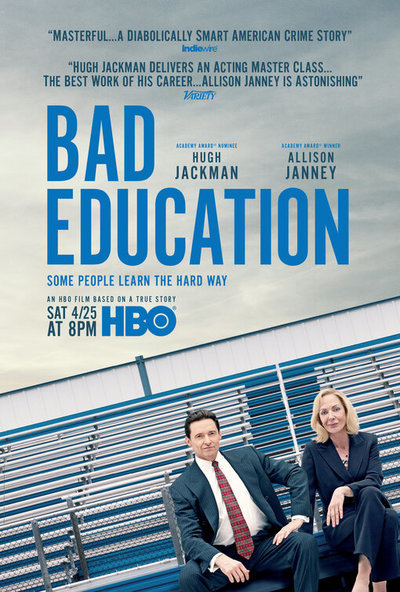